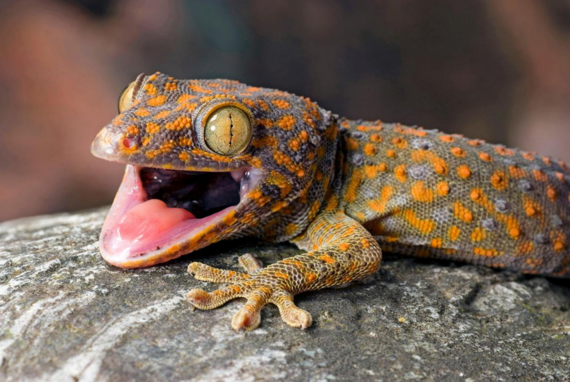 Tokay geckos are the world's second largest species of gecko, with males reaching lengths of up to 15 inches (38 centimeters). Photograph by blickwinkel/Alamy Stock Photo

For many species threatened by the illegal wildlife trafficking, such as rhinos, elephants, tigers, and bears, debates persist as to whether a legal trade in their parts and products can reduce smuggling.

But increasing evidence suggests that a legal trade instead acts as a conduit for the illegal trade. For instance, recent studies showed that Hong Kong's domestic ivory sales provided cover for illegal stocks. Now, a new report by TRAFFIC, a wildlife monitoring NGO, on captive breeding of Tokay geckos in Indonesia suggests the same holds true for captive breeding.

Tokay geckos are nocturnal lizards that live in Southeast Asia. While there is some demand for them as pets, the real demand is for their use as traditional Asian medicines -- everything from an aphrodisiac and energy drink to treatments for diabetes, cancer, and HIV/AIDS. There's no proof of their efficacy in any of these uses. The animals are captured, gutted, dried on sticks in kilns, and exported, mainly to China but also to Taiwan, Hong Kong, Vietnam, and elsewhere. 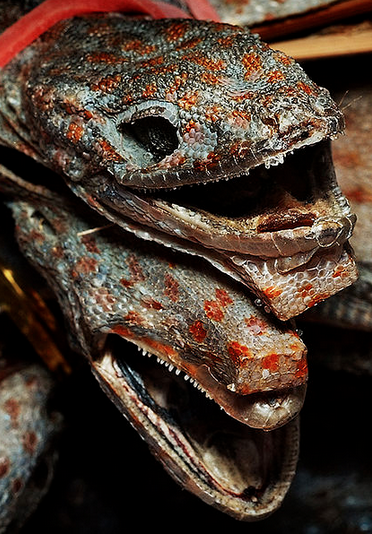 While it's often argued that captive breeding relieves pressure on endangered species by providing an alternative source for trade, the report, "Adding Up the Numbers: An Investigation into Commercial Breeding of Tokay Geckos in Indonesia", demonstrates that the opposite is true. Rather, it finds that wild-caught Tokay geckos are regularly laundered through Indonesia's captive-breeding facilities on a massive scale.

Because Tokay geckos aren't listed under the Convention on International Trade in Endangered Species of Wild Fauna and Flora (CITES), their international trade isn't subject to regulation.

In Indonesia, the harvest and export of wild-caught Tokay geckos are subject to quotas. Commercial breeding is allowed, and the government has given permission for six companies to export three million live captive-bred Tokay geckos a year, specifically for the pet trade.

But the TRAFFIC study found that the exporting companies don't breed Tokay geckos in those commercial numbers--the logistical requirements would be too costly. Instead they export wild-caught Tokay geckos, dead, for the medicinal and meat trade in numbers far greater than permitted. While there's no legal trade in dead Tokay geckos from Indonesia, according to TRAFFIC, Indonesia exports an estimated 1.2 million dried Tokay geckos annually.

The report concludes that trade in those high quantities can be sustained only through the routine laundering of wild-caught individuals and their export as dead specimens.

An interview with TRAFFIC's Southeast Asia office, in Malaysia, Chris Shepherd, coauthor of the report, explains that it's low-profile species like Tokay geckos that are often hardest hit by illegal, unsustainable trade. To read the Q&A, please click here.

This is an excerpt of an article on National Geographic titled "How the International Trade in Geckos is a Scam" and was published with permission. For full article, please click here.