Five months after it agreed to stop lying to investors about the impact that "climate change and potential regulatory responses" were having on its business - and four months after it was caught funding climate-science denier William Happer - Peabody Energy Corporation became the 50th coal company to declare bankruptcy, and it attributed its dire predicament to "unprecedented factors" beyond its control.

"Industry pressures in recent years include a dramatic drop in the price of metallurgical coal, weakness in the Chinese economy, overproduction of domestic shale gas and ongoing regulatory challenges," said the company - once the world's largest publicly-traded coal company - in a press release that also assured investors that "multiple third-party estimates project that both the US and global coal demand will stabilize."

The announcement surprised no one and serves as "a harbinger of the end of the fossil fuel era," says Jenny Marienau, who is the US Divestment Campaign Manager for 350.org - an organization that has arguably done more than anyone else to push fossil-fuel risk onto investor agendas.

"[Peabody Energy] have consistently put profit over people, and now their profits have plummeted," she says. "Our world has no place for companies like Peabody."

True - but the transition from fossil fuels to renewable energy won't be a painless one, and it will hit the innocent as well as the guilty, as West Virginia University provost Joyce McConnell pointed out last week at WVU's National Energy Conference.

"We're witness now to the collapse of an economy," she said, and she should know: West Virginia gets almost all of its electricity from coal, and roughly 30,000 of its people work in the sector, yet output has fallen by around one-third since 2008, and it's expected to continue sliding, according to the university's most recent economic outlook for the state.

At the same event, World Resources Institute economist Noah Kaufman said that well-designed policy could leverage carbon markets to help those hurt by the transition. 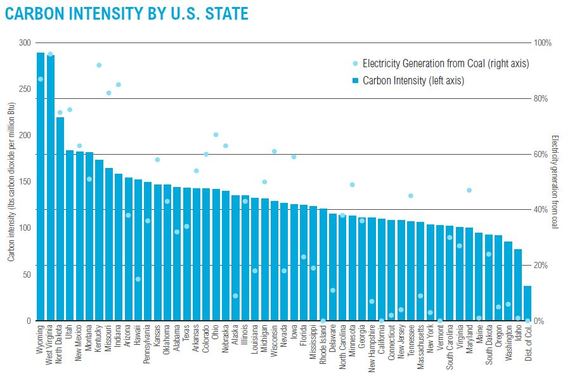 This chart, from "Putting a Price on Carbon: Ensuring Equity", offers insight into which states will pay the most for a price on carbon: namely, those with the highest "carbon intensity", which is the amount of carbon dioxide emitted to produce a given amount of energy. That, of course, is by design, and intended promote a shift to more sustainable energy sources, but the people of coal country will get hit with both a price increase and an income drop. Notes: State electricity generation, energy use, and fossil fuel consumption 2013 data is from U.S. EIA 2015b. Emissions rates are averages for major types of fossil fuels from U.S. EIA 2015c.

In a 34-page paper called "Putting a Price on Carbon: Ensuring Equity", Kaufman offers a deep dive into the impact that carbon pricing can have on people in different parts of the United States and across the economic spectrum. He doesn't break new ground, but instead offers a clear-headed overview of existing research and then tops it off with his own recommendations - with the caveat that the ultimate aim isn't to provide social welfare, but to shepherd the transition to a low-carbon economy.

"Revenue can be targeted in ways that counteract the burdens of a carbon price on particular regions or socioeconomic groups," he writes. "However, the more carbon pricing revenue that is used to compensate particular groups, the less is available to accomplish other objectives, such as tax reform or investments in clean energy."

In a nutshell, he concedes that a carbon price will drive up energy costs, but he argues it won't necessarily hit the poor the hardest, as some critics claim, because investment income is hit harder by a carbon price than is wage income or government transfers, such as welfare and social security.

He looks at the impact that carbon prices of between $15 and $30 per ton of carbon dioxide would have on household income, and he assumes an increase in government revenues of between $100 billion and $200 billion per year. To keep the impact fair, he argues that some of the revenue should be used to support a "labor tax swap", which is a fancy way of arguing for reduced taxes on the poorest among us. That, he argues, is more fair than a direct rebate to households, which would benefit the poor the most, or a "capital tax swap", which is reduced taxes on investment and would benefit the rich the most.

The state of California has taken something more akin to the rebate approach, and is funneling roughly 25% of its cap-and-trade income into support for low-income people hit by rising energy prices. The UCLA Luskin Center for Innovation recently published a report called "Protecting the Most Vulnerable: A Financial Analysis of Cap-and-Trade's Impact on Households in Disadvantaged Communities across California," which says the program is working for the poor, but doesn't examine the impact on the rest of us. 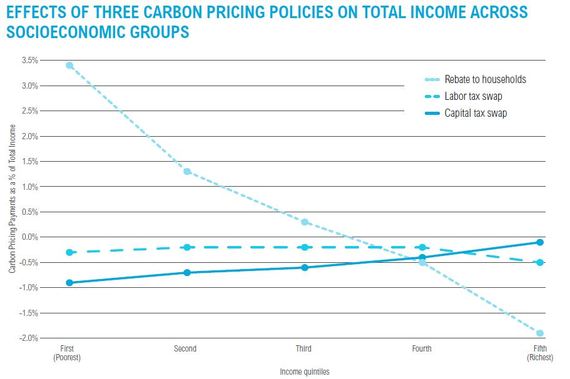 What About Coal Country?

Kaufman concedes that people in coal country will be doubly-whacked by seeing their income plummet as energy prices rise, and many will lose their jobs. He argues that people in those regions and sectors should get targeted support, at least initially.

"By using just a small portion of carbon pricing revenue to specifically target low-income households and coal communities, policy designers can ensure that these groups are better off under a carbon price than alternative policy pathways," he wrote, adding that money could go to "job search assistance and job training, supporting community development and infrastructure projects, and providing direct monetary assistance."

Drawing on work from the Center on Budget and Policy Priorities, he proposes using roughly 10% of the revenue fore this purpose, and he makes the case in clear language that even the most economically illiterate among us will understand.