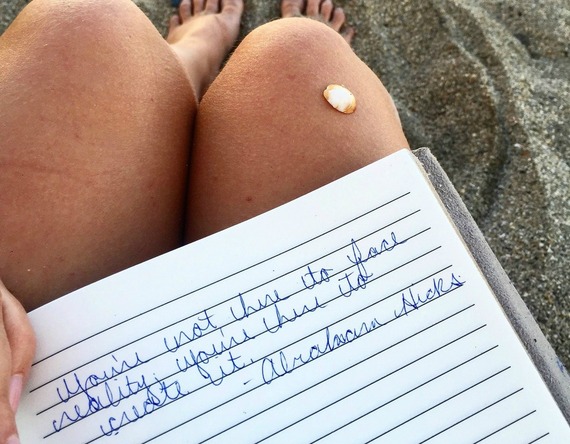 I heard this story yesterday, and it got me thinking (even more than usual) about the stories we tell ourselves and how they affect our lives.

The story was about a school that taught people foreign languages. They had a unique way of teaching- before they would even begin to get into the actual language, they gave everyone in the class a new identity. Each person got a new name, a new hometown, a new occupation, etc. They would spend the first week of class learning about and getting on board with their new identities. After this week, they would move on to learning the language.

Not everyone who attended the classes liked this approach and many would drop out, but the people who did go with it and fully embraced their new identity (during class time only) picked up the new language 5-10x faster than the average person! How cool is that?

This story basically shows the power that our own stories have over us. We have so many ideas and meanings and beliefs attached to who we are, and when we allow ourselves to step out of this self constructed box, we change what is possible for us and our lives.

When they were dealing with their own identities, the language students had a lot of ideas attached to their capabilities - "I've never spoken this language before," "I had trouble in school with French," "I know how quickly/slowly I can pick up new material," etc. etc.

Once they got a brand new identity, they just had way less meaning attached to who they were, which meant less limits on their capabilities.

I think everyone has had the experience of getting a chance to reinvent themselves and leave behind an old identity, so you probably understand the freedom that this can offer. Maybe you moved or started a new job/school/University/whatever. A chance to let go of how you and others used to see you and tap into a whole new side of yourself.

I also saw this Dove commercial on YouTube yesterday, and it is on the same theme of changing your story. It shows a series of women who were told they couldn't/shouldn't do something because of who they were and how they looked, but they decided to ignore this and not make other people's opinions their story.

Maybe you tell yourself you can't do something or your body isn't right or your ex boyfriend broke your heart so you'll always have trust issues. Or maybe you wake up every morning and tell yourself you are amazing and life is amazing. I don't know your story, only you do. All I'm saying is you get to script it.

I think you can change anything with your thoughts, and in my personal experience, simply changing my story is so much easier than trying to figure out what I'm doing wrong and how to fix it. Don't analyze what you're doing wrong because that just perpetuates the negative story. Just start telling yourself something new: I am healthy, I am so smart, I am open, I'm like a sponge- I pick up new languages so easily! It's seriously so fun to just be nice to yourself and rethink what is possible for you (hint: anything and everything is possible - change your story, change your life).