I met a woman recently who can light her tap water on fire (see the photo below). She told me that a natural gas company had built a drilling station on her ranch and after a year or so her dogs stopped drinking the tap water she put in their dishes.

When she turned on her faucet there was a hissing noise like leaking gas before the water would come out. Neighboring ranchers told her that their kids came out of the shower with chemical burns all over their bodies. Another neighbor's water well shed burned to the ground.

On a hunch she took some of the tap water out to her shed and put a lighter to it. As she suspected, it lit on fire. 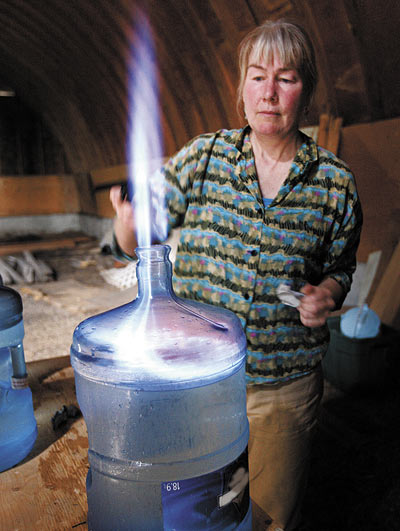 The story was so unbelievable that I spent the next couple of weeks looking into the natural gas industry and the extraction process they use called "hydraulic fracturing." The process involves pumping thousands of gallons of fracking fluid (a mixture of sand and soapy chemicals) into the ground to create enough pressure that a rock formation will fracture, allowing the natural gas to escape and then be extracted.

Turns out that a lot more people living close to natural gas wells could light their water on fire. In fact, there was a documentary made about all this recently. Here's an excerpt from the film of another rancher that can light his water on fire.

Most of the natural gas drilled in the US uses hydraulic fracturing because it is the cheapest and easiest way to get it out of the ground. The chemicals used in the fracking fluid that is pumped underground is also exempt from the Clean Water Act, making it a lot easier to dance around environmental restrictions.

In 2005, at the urging of Vice President Cheney, fracking fluids were exempted from the Clean Water Act after the companies that own the patents on the process raised concerns about disclosing proprietary formulas - if they had to meet the Act's standards they would have to reveal the chemical composition which competitors could then steal. Fair enough, but this also exempts these companies from having to meet the strict regulations that protect the nation's freshwater supply.

This was a sweetheart political deal and it probably doesn't surprise you that the the Vice President's former employer Halliburton is one of the largest players in providing hydraulic fracturing services to gas companies.

So why are people finding their tap water a fire hazard? The gas companies deny that it's their fault and because of this Halliburton loophole, it is pretty hard to prove otherwise.

There is a bill currently making its way through Congress that will hopefully close the Halliburton Loophole.

Let's hope it passes because if it doesn't, we're fracked.