We recently conducted focus groups with women who were residing in domestic violence shelters. There were many insights, but one new conclusion was drawn. If we want to end domestic violence, we must focus on Childhood Domestic Violence, or CDV.

"This is an epiphany for me"

A woman who joined one of our focus groups said, "This is an epiphany for me." She was living in a domestic violence shelter along with her two children. She was concerned for them, as they grew up living with domestic violence.

She didn't know how to talk to them about it. She didn't know what to call it. Further, she didn't until that moment connect the fact that she, too, grew up living with domestic violence. She experienced Childhood Domestic Violence.

"They don't often connect the dots..."

This young woman is not alone. Dr. Renee McDonald, a leading researcher at Southern Methodist University said, "They often cannot connect the dots between what they experienced in their childhood homes and the challenges they face today." Dr. McDonald was specifically talking about Childhood Domestic Violence.

What is Childhood Domestic Violence?

Most people have heard of physical child abuse, sexual abuse, emotional abuse, and neglect; these are all adversities that a person might face in their childhood home. However, there is one adversity that most people probably haven't heard of, as it has very limited awareness... that adversity is Childhood Domestic Violence, or CDV.

CDV occurs when a person grows up living in a home with domestic violence. From the standpoint of a person in childhood, domestic violence is violence between their parents or violence towards a parent, from a significant other or stepparent.

It impacts the developing brain and physiology of the body

CDV impacts a person in a number of ways. One in particular is that it encodes a series of negative beliefs, or LIES, in the developing brain. And since one of the brain's primary jobs is to find evidence of what it believes is true, more often than not, the negative beliefs formed for a person who experiences CDV become the foundation of that person's self-concept throughout life.

As an example, if a person who grew up with CDV early in life believed that they were guilty, ashamed, that there was something wrong with them, or if they thought they were inherently worthless or fearful, then their brain finds evidence as to why this is true throughout life. This simply becomes who they are. These beliefs then impact their behaviors, health, emotions, and relationships.

The impact stays with them unless...

So how does the self-concept of a person who experiences CDV change for the better? The impact will often stay with the person unless someone steps in to help them unlearn what was learned. In the life of a child, a caring adult must step in to help the child become aware, understand, and share. The same holds true for an adult. But how can this happen when there is no awareness? 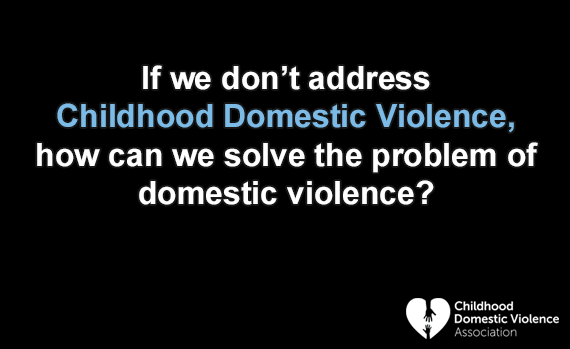 If we don't deal with the impact in childhood, we can't solve domestic violence

The adults who experienced Childhood Domestic Violence are key

We must provide the adults who experienced Childhood Domestic Violence -- all 40 million of them in the U.S. alone -- with the information they need, so they can begin to connect the dots and take the first steps towards becoming aware, understanding and sharing. Only then can they share these messages with their own children and other loved ones.

We must provide the young people with the words they need

In the same way that we've educated children about bullying in school, we must also educate them about the adversities they are facing in their childhood home.

A more holistic approach to the issue of domestic violence is needed to help the millions of children and adults that are impacted. We need to bring the tools and information to those who need them. Most critically, we need to address the single best predictor of it -- Childhood Domestic Violence.

Do you want to learn more about CDV, domestic violence, and the tools and resources available? Visit the Childhood Domestic Violence Association at www.cdv.org and the National Coalition Against Domestic Violence at www.ncadv.org.