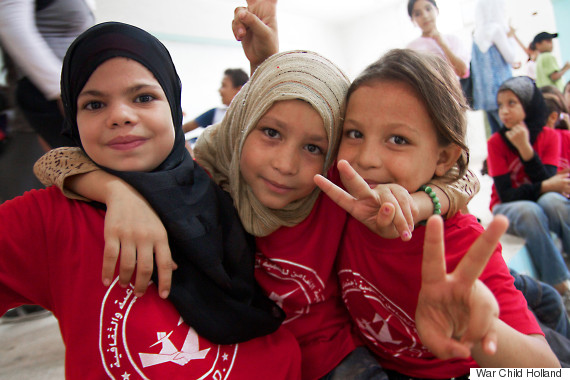 Syrian refugees and Lebanese children learn to express themselves and connect through the innovative project 'Yallah Peace'.

"I used to feel..." Leyla pauses, struggling for words as the other children play around her, "...that Syrians or other nationalities are foreigners and intruders." Then she shakes her head. "It was a wrong assumption."

Leyla (13) was born and raised in Lebanon, where now 1 of every 5 people is said to be a Syrian refugee. That's over 1 million refugees on a population of 4.5 million people, in a small country that already has many social and economic problems. It's a number that puts the current refugee influx in Europe -- and its debates -- into stark perspective. Lebanon has been providing support to refugees for years, and also struggles with the increasing tension and discrimination among people.

But something remarkable has happened in the past year.

Leyla took a good look at the boy next to her and realized he didn't mean any harm, and that the quiet girl in the corner was not stuck up, as she'd previously assumed, but simply afraid to play with her.

Things are changing. Peace is growing. And it had everything to do with the children. 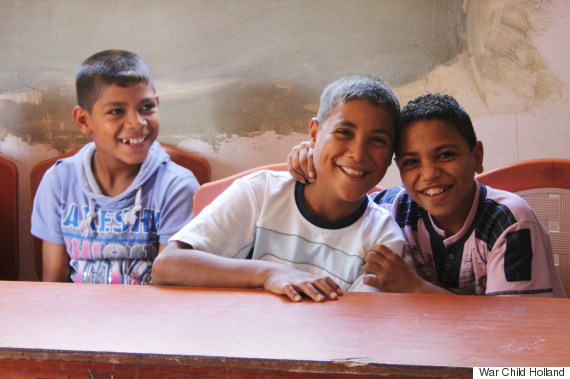 Boys in Lebanon grin at the camera. In the Safe Spaces, created by War Child Holland, children from conflict areas receive the psychosocial support and protection that they need.

War is complex, yet peace can be like a puzzle - small pieces fitting together to create one big picture. That's exactly what children are learning in the Yallah Peace Project in Lebanon. Yallah Peace, or Let's Go, Peace! is organized by War Child Holland, a NGO providing psychosocial support and education to children affected by war - and it's changing lives in 10 communities across Lebanon.

The goal is straightforward: stop the culture of distance and violence so there can be peace.

Connecting Syrian and Lebanese children has proved to have a powerful effect: In the past year, 1,500 children got to know each other in creative activities such as theatre and dance. Despite of the serious topics, there's plenty of room for fun and entertainment -- something welcomed by all the children, but especially those who had lived through repeated trauma.

Leyla isn't the only one with a changed perspective once she got in touch with some of her Syrian peers. Her friend Najwa (14) also found help for her own struggles:

"I had so much trouble with my anger, my moods," Najwa explains. "Now, when I have a problem, I breathe in and count to ten. I try to put myself in the other person's shoes and I don't assume things."

That's precisely what it means to work on issues around conflict at a basic level. Children learn to examine the cause, consider all people involved, then look for mutual solutions. For children and youth who've grown up in a world of violence, uncertainty and danger, that can be quite a task. Time and patience are part of the process, but with Yallah Peace, so is laughter. 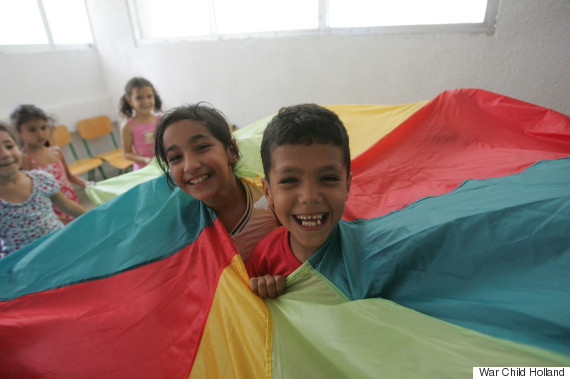 Creative methods are at the heart of War Child Holland's support to children; including theatre, music and art projects that use technology and innovation, such as an Animation Festival in Lebanon.

There's a lot to be gained for children in conflict areas when it comes to self-development; it creates a foundation for the rest of their lives. Although technology is often used to help educate these young children, sometimes the best lessons can be learned through personal engagement.

When Ranim (16) is asked about the most important thing he learned, he points at a painting in the center of the playroom, featuring a globe surrounded by children of various ethnicities holding hands. "That we're not the same, but we're alike. And that we can do things together. So there can be peace." Wise words from a boy who had to leave his home and part of his family behind in Syria.

"We will keep going"

After a workshop, a few children get a moment to step in front of the group and speak. Some messages are short, others more tearful, especially from some of the younger refugee children. Finally, Ranim is given the microphone and he talks about his time with Yallah Peace. Everybody listens quietly, but his parting words echo the sentiments of everyone who is present, and the others erupt in applause:

"Despite the crimes of the evil people, the pain of the explosions, and despite the destruction and sadness, we will keep going. Until there is peace all over the world."

Note: Names and identifying details have been changed to protect the safety of the children.