Math and I aren't really the best of friends. In fact, we're barely on speaking terms. There is one thing that Math and I have in common, though: a love of Venn Diagrams. A light bulb went off for me recently when I was thinking about how my chronic illness interacts with my new-found motherhood. Earlier in the week I had been throwing myself a good old-fashioned pity party -- bemoaning my health issues along with the challenges of being a mother.

As I started listing off all my woes, I began to see a silver lining instead. Years of struggling with the limitations of my body had actually prepared me for the most important role of my life: being a mother.

One of the first commonalities that came to mind was the ability to buckle down when things get difficult. For instance, I worked two jobs to put myself through college despite spending many of those years sick. Looking back, I have no idea how I managed to do all of it. Actually, I have no idea how I manage to accomplish a lot of things. But -- just like many people with a chronic illness -- when I am told I can't do something, I am just that much more determined to do it. You learn to deal with what life throws at you. Have to pull an all-nighter to cram for finals but you're in the middle of a painful flare-up? Tough. There are just some things in life that you really can't bail on no matter how much you wish you could. 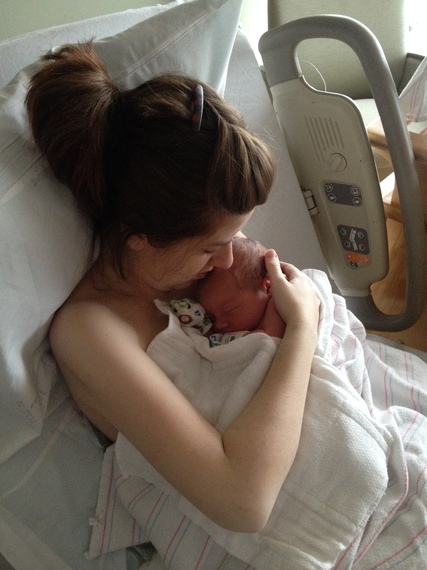 Learning to deal with those types of situations built up this thing I like to call a "Stamina Callus." Just like you need calluses to be an awesome guitarist (I think? I don't know I'm not musical), you need to have a certain stamina level to survive motherhood. So when the baby needs to be fed and I've only had 2.7 seconds of sleep, I can just do it. Thanks Stamina Callus!

Just like I had learned the importance of endurance, I found the art of compensation to be quite valuable, too. Compensating, to the average person, means to counter-balance something. To a person with a connective tissue disorder, it means constantly shifting your weight or changing your stance in order to prevent or manage a dislocated joint.

I was diagnosed with Ehlers-Danlos Syndrome when I was a teenager, but I had been living with the effects my whole life. Even from a young age, I remember wondering how my T-Ball teammates could just jump off the bench and immediately run on to the field. If I had done that, I probably would have wiped out before even exiting the dugout.

So bending over to pick up a 15-pound infant a gazillion times a day really didn't seem so bad after a lifetime of face-plants. I already had experience balancing, being uncomfortable, and knowing when to ask for help to avoid a really bad spill. And trust me, once you have such precious cargo in your arms, you become keenly aware of the dangerous, slippery world around you.

Clearly nothing compares to the lack of sleep you experience once you become a mother. But I would bet good money (like four bucks, maybe?) that the fatigue associated with Lupus could be a close second. Lupus fatigue also comes with a pesky side of anxiety. It's like you can feel it coming on, yet you know you have little to no control over it. Imagine driving a semi-truck on an icy road around the side of a mountain and right as you approach the curve, a blindfold descends over your eyes and you are defenseless.

The fatigue/anxiety combo actually was a pretty accurate test run for being a new mom. In those first weeks, you're desperately exhausted, yet every time your head hits the pillow, you immediately panic thinking the baby needs you. I won't lie, that urge to check on him "just one more time" is still with me and probably will be forever, according to my own mother.

It took me almost three decades, but I finally see all the good things chronic illness has brought me, and I have motherhood and my sweet boy to thank for that. I've grown to love the beautiful messes in life instead of trying to fight them. When I look into his eyes, I want to be his warrior, showing him that fierce determination and an openness to change will put any dream within his grasp.

This blog post is part of a series for HuffPost Moments Not Milestones called 'Lived and Learned: What I Want My Younger Self To Know.' To see all the other posts in the series, click here.