Despite the ongoing and often exhilarating progress on clean technologies - from carbon capture and storage to lab-grown hamburgers - we know that they are not going to halt climate change any time soon.

Which leaves us, in the battle to reduce our carbon emissions to a level that will keep catastrophe at bay, one viable option: the monumental task of changing a host of human behaviours, at scale and in a coordinated and sustained manner.

Reading the news about our failures to overcome much lower hurdles as societies, this might understandably seem as hard or unlikely as any silver-bullet technological breakthrough.

But we have weaned ourselves off CFCs, for example, and the hole in the ozone has started to close. Of course CFCs are not as hard to relinquish as hydrocarbons and all their myriad conveniences. But if there is one thing that is more closely comparable it's water. A little-known initiative in Melbourne, highlighted by the Australian civil servant Andrew Wear, suggests that with smart patient government interventions, huge and unpalatable changes can be made by millions of people, acting in unison.

The problem really started in the late 1990s, when the amount of water running into Melbourne's reservoirs dropped by a third, just as the city was expanding rapidly. By 2008, more than 70% of its water capacity stood empty. At one point, this city of four million people was only 500 days from literally running out of water.

The local government had tried imposing restrictions on things like watering gardens and filling pools, backed up by improvements to plumbing standards and better water recycling and stormwater conservation. As the drought worsened, they continued to tighten the restrictions until it became politically and economically impossible to go any further. 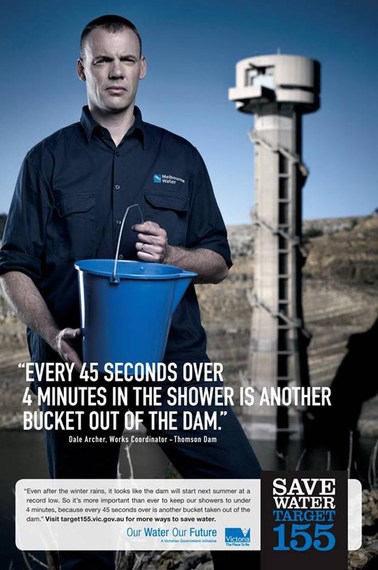 And finally, as water levels continued to drop, they turned as a last resort to behavioural economics. Central to the new plan, launched in 2008, was a plea for the people of Melbourne to each individually reduce the amount of water they were using. Called Target 155, it asked them to get down to 155 litres per person per day. In the 1990s, it had been 423 litres and in 2001 it was still 247 litres.

The program was an astonishing success. By 2010, consumption was down to 147 litres, 53billion litres of water had been conserved, the reservoirs were filling up again and the city had literally been saved.

The three keys to their success

1. They gave people a challenge they could work with and progress they could see. By setting a target of 155 litres rather than vaguely asking people to use 'less' water, they made a meaningful change seem achievable. They sent out fact sheets so people could estimate how much they were using and, getting even further into the nitty gritty, they campaigned for people to reduce their shower to less than four minutes.

To keep up the momentum, they had the nightly weather report include updates on how much progress the city was making and displayed the same updates on motorway billboards.

2. They stuck with the program. The first water restrictions were imposed in 2002; they were still in place a decade later. In that period, the government consistently stressed this as a priority. Even though their argument was powerful and right, it needed to be made over and over again to permanently change people's behaviour. The people of Melbourne were facing a disaster, but it still took a decade to make sustainable change to their behaviour.

3. They made it easy for people to change in lots of ways. As well as telling people practically how to reduce the amount of water they were using, they did things like send free low-flow showerheads to people's homes and created a system of financial incentives to underpin the advice. There were tax rebates on rainwater tanks and efficient appliances like dual flush toilets, as well as progressive water pricing with homes having to pay a premium for high use.

What does this mean for CO2?

The story of the Melbourne initiative has an unhappy ending - and one damning of politics. In 2010, when the drought broke, the program was scrapped after the Labor government was replaced by the Liberals, for whom the program was too closely associated with their predecessors and with controversial desalination and pipeline projects.

But even after water restrictions were lifted and consumption rose again, it only went up to 160 litres, still 35% less than in 2001. People had been changed for good. And earlier this year, Target 155 was reactivated to keep Melbourne in the clear.

'The fact that we've been able to have permanent water savings as a new normal has been a huge shift,' said Environment Secretary Adam Fennessy. 'The ability to get down to household level for practice change has been pretty impressive.' 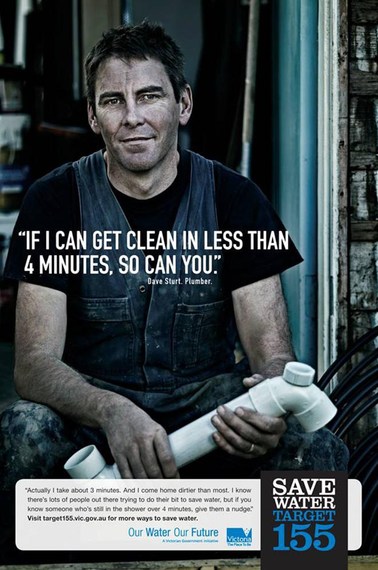 Beyond water, the program stands as proof that large-scale behavioural change is possible and that a committed government can trigger it to tackle the most urgent environmental problems.

Moreover, it shows that the great transformations our societies undergo to improve do not lie solely in the hands of technologists, commentators or even political leaders, but can come about through the patient, practical work of public servants tapping into the enormous potential of mass action and the willingness of people, if change is made easy, to do the right thing.