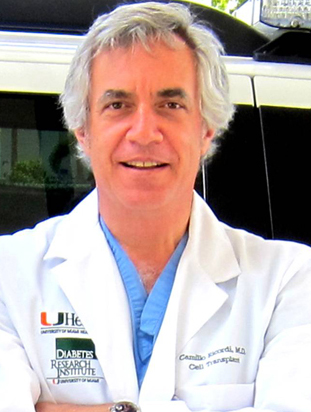 I spoke with Dr. Camillo Ricordi in this second profile of change leaders in diabetes. Dr. Ricordi is the Scientific Director at the premiere, cure-focused, Diabetes Research Institute (DRI). This is Part One of a two-part post.

I was intrigued by Dr. Ricordi's journey. Born into a wealthy Italian music publishing dynasty, he became the man who the night before Thanksgiving, harvested 220,000 islet cells from an American soldier's decimated pancreas, and led an islet-cell transplant through an Internet connection to save this solider from disabling diabetes.

Q: You grew up in Milan in a wealthy, music publishing family knowing people like Leonard Bernstein and Bianca Jagger.

Dr. Camillo Ricordi: Yes, my family's company began in 1808, they are very big in music publishing. I was actually born in New York while my father was running the American part of the business. Leonard Bernstein was a friend of my parents and I am told he held me at my baptism. We returned to Italy when I was three months old and growing up I was often backstage meeting artists. But I have turned out to be the black sheep of my family -- the only person who chose medicine in 200 years!

Q: So as glamorous as it was, the music business didn't call you?

CR: No, I enjoyed meeting the artists but never considered it a real profession. I was more influenced by my grandfather who was an engineer, inventor, physicist and physician. He filled me with curiosity and a love of research.

Q: What took you into scientific research and diabetes?

CR: I wanted to do brain research, but after an internship and three years in neurophysiology I realized we were not yet very advanced in the study of the brain. I thought cancer or transplantation held more immediate opportunity for change.

As an intern in neuroscience my professor told me, "You cannot finish medical school without doing more medical rounds." Even though I wanted to do research, I needed more direct contact with patients.

So I worked for one year in the diabetes department of a major hospital in Milan. At that time in the U.S. they were beginning to experiment with transplanting insulin-producing cells (islets) and I saw a new horizon for a cure.

I had an idea how to isolate islet cells from the human pancreas, and so in the 1980's I went to Washington University in St. Louis. They were the leading center in islet transplantation.

Right around that time my little cousin, Serena, was diagnosed with type 1 diabetes. I thought I would find a cure for diabetes in a couple of years and then go back to Italy.

Q: What held you up?

CR: The experts in islet cell technologies at the university were using a different protocol so I couldn't test my idea for a year. Then one night they were discarding a pancreas at the university. I waited for everybody to leave the lab and did a secret experiment. I thought if it doesn't work I won't tell anyone. If it does I'll tell my boss.

It worked, and within a few weeks all the engineers at the lab switched to this new procedure I'd tried. It's based on a chamber.

Q: This is the Ricordi Chamber?

CR: Yes, but it was not my idea to call it that. I had called it the Automated Method.

Q: How did you come up with it?

CR: Truly, I was inspired watching a log burning in a fireplace. I thought you could develop a process where the pancreas would sit inside a chamber and like the slow, continuous process of disassembling a log in a fireplace, we could disassemble a pancreas and liberate insulin-producing islet cells.

At the time it was very tough to break down an organ and get the islets out. They used a very heavy mechanical device not unlike a kitchen grinder. So my idea was quite radical. People laughed, "Sure you want to put a whole organ into a chamber and have things coming out the other side!" But it worked.

Q: Does your research benefit people with type 2 diabetes as well as type 1?

CR: Absolutely. The results of our work will benefit people with every form of diabetes. Oxidative stress, inflammation, beta cell regeneration and replacement, these are all common themes and targets of therapeutic intervention for every type of diabetes. And we must remember, most patients with type 2 diabetes eventually require insulin because of the progressive beta cell dysfunction that develops.

CR: We are much closer, there's been more progress in the last five years than the preceding five decades. It won't happen tomorrow, though, and I hate to over-promise because so many people have been disillusioned. But I'm still working with the same enthusiasm and determination as if the cure will be within the next three years.

Q: What do we know today that we didn't know before that puts us closer to a cure?

CR: We have technologies to prevent rejection of islet cells and to manipulate the immune response so we don't destroy the immune system. We're now planning the first trial in China in type 1 diabetes to block disease progression at the onset, and see if it's possible to transplant organs and tissue without the use of lifelong immune suppression drugs. These are things that we would never imagine 10 years ago.

There's new technology for local delivery of anti-rejection drugs. You can just affect the cells that are transplanted in a micro-environment without bombarding the entire body with toxic immune suppressing drugs. That's something we didn't have a few years ago.

The whole field of stem cell research and tissue reprogramming is very dynamic. At some point we will be successful in transplanting islet cells without anti-rejection drugs at all. Then everyone will want a transplant of insulin producing cells. That's why it's so important that we work toward reprogramming cells from one's own body to become insulin-producing again or find an unlimited resource for insulin-producing cells like embryonic or non-embryonic stem cells.

The soldier from Afghanistan, they removed his entire pancreas at Walter Reed hospital. Then it was flown to my team in Florida. We put his pancreas in the chamber, harvested 220,000 islet cells, flew them back to Walter Reed and they were injected into his liver. We reversed his diabetes. We also discovered that we don't need to transplant as many islet cells as we thought. Fifteen days after the procedure all the transplanted cells were functioning and on day 26, tests showed his insulin production was normal.

Q: So why did the islet-cell infusions performed during the Edmonton Protocol in 1990 fail? Within two to seven years all the recipients needed insulin again.

CR: The transplant didn't fail, but the immune suppression drugs that were so effective preserving the islet cells from rejection, also blocked the islet cells' ability to regenerate and replenish themselves.

People say islet transplants fail, but it's not true. The cells were not rejected, but they became progressively less efficient to support the insulin requirement. Most people still have some insulin production from those transplants and can keep their HbA1c (measurement for how much glucose -- blood sugar -- is attached to red blood cells) in the near normal range without severe hypoglycemic episodes.

But this procedure is now only used in the most severe cases of diabetes. The big problem is not so much the loss of islet cell function but the fact that you need life-long immune suppression drugs. So you can't justify offering this procedure to most patients.

That's why the research effort now is in how to protect the islets from attack by the immune system and in immune tolerance.

Q: What has been your biggest surprise doing this work?

CR: How fast you can move in the right environment. In 1988 I went back to Italy from Washington University to start clinical trials. But I was told, "Shouldn't we wait for the big centers in the U.S. to be successful first?"

The leadership level of the hospital got cold feet and I wasted a year and a half of my life setting up the whole center and not doing any trials. Then one day while I was making rounds I got a call from Dr. Starzl, a transplant pioneer heading the University of Pittsburgh Transplant Institute. He was searching for someone to start and lead the islet transplant program there. He said, "You happen to be the first name on a list of 10 names and I will give you 24 hours to decide. If your answer is yes then you have one week to move here because we don't have time to waste at this center." I took the 24 hours, but of course I'd decided the moment he offered it to me.

Here at the DRI I consistently experience how powerful attitude and institutional commitment are to get things done, and when you have them, how quickly things happen.

The support of the Diabetes Research Institute Foundation has enabled me to assemble one of the world's outstanding teams, and set up the DRI Federation. Working with so many international centers and eliminating geographical barriers to scientific collaboration, our capabilities have expanded at an accelerated rate.

Q: How long have you been doing this work?

Q: What keeps you going?

CR: Most diabetologists tell patients, "You can live a long, acceptable life with diabetes. It is just an inconvenience." It's easy to think diabetes is acceptable if you don't have it. Without being dramatic, because the treatment has improved significantly, it is still not acceptable.

I just lost a friend last Friday, he called to ask me how to handle something and he said we'll talk after you come back from your holiday. He died in the night of diabetes-related cardiac arrest while I was away.

Last week I met the mother of a 13-year-old who did not wake up one morning because of severe hypoglycemia. She is unfortunately one of so many to experience this.

I started this work to cure diabetes. My goal has not changed. I will keep working until I get the job done.

Dr. Camillo Ricordi is one of the world's leading scientists in cell transplantation. He serves as Scientific Director and Chief Academic Officer of the University of Miami Diabetes Research Institute. The Diabetes Research Institute (DRI) is recognized as a world leader in cure-focused research. Since its inception in the early 1970s, the DRI has pioneered many of the techniques used in islet cell transplantation and advances in cell biology and immunology. The DRI is now bridging emerging technologies with cell-based therapies to restore insulin production.