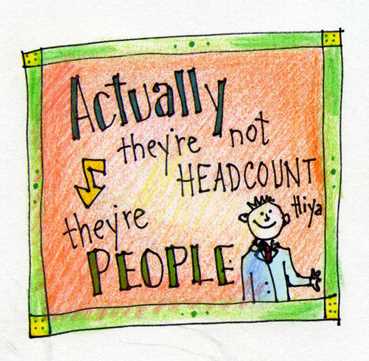 When I was 19, I got burnt out on waiting tables and decided to become a part-time office bunny. I stocked up on office attire and went down to Kelly Servces, where a nice lady got me into a clerical temp job at a fancy schmancy office high above the skating rink in Rockefeller Center. For me, working in the corporate world was pure anthropology.

Even though my dad was a publisher working three blocks away at McGraw-Hill, I hadn't been exposed to corporate culture or its native language, corporate jargon, before then. I didn't remember my dad talking about putting the pedal to the metal or being locked and loaded or any of that stuff. He didn't come home from work talking about price earnings ratios and cross functional teams. He sounded human all the time. I hadn't appreciated, as an outsider to the shadowy world of corporate life, how much the terminology shaped the way that people behaved at work, but I saw that connection close up as a nineteen-year-old temp.

When I got into HR a few years later and then starting writing about human behavior at work, the language-culture connection became more and more visible. We teach young people entering the workforce a new language, with its own definitions and shadings and assumptions baked into it. The language cements the corporate frame, the mental model that carries with it all kinds of beliefs:

- "Professional" behavior is more formal, more stiff and more calm (emotionless) than normal behavior.
- The most important element in any corporate conversation is the power relationship between the people who are speaking and those being spoken to.
- Everything that is structured and bulleted and defined is good, in corporate life. Everything that is messy and random is bad.
- Laughter, spontaneity, warmth and whimsy are not welcome in corporate America. Formula, logic and analysis are our gods.

The list could go on and on - you know the tenets of the religion of bureaucracy as well as I do. What's interesting to me is how easily so many of us suck down the Kool-Aid, even branding ourselves (our own selves!) as Results-Oriented Professionals and Multi-Functional Team Facilitators. That is not our native language, you guys. As my nineteen-year-old daughter says to me, "You guys (everyone over 40) learned that language against your will, in your sleep, but now when you sit down at a keyboard to write something about work, that's the language that comes out." My daughter is right. Every day I get email from people who say "The only way I know how to write a paragraph is in corporate style."

The language sucked us into the vortex as youngsters, back when we thought learning a new grown-up language would make us very professional indeed. We didn't realize at the time that the more we got comfortable calling groups of our colleagues "headcount," the less human we would become. We didn't know that corporate jargon is a hedge against recalling and reflecting on what we know to be true, that work is just another place where people gather. The jargon protects us by reducing real people and their emotions to columns and rows and policies. It helps us to think about our lives at work as something outside of our true selves.

When we talk about deliverables and skip level reports and employee engagement ,we are using language from another world, set apart from the human world we inhabit. That language is as exotic and laden with meaning as the wizarding language used at Hogwarts School of Witchcraft and Wizardry. We use the language and convey "I inhabit this world, and I know its secrets and rules." When we use the other kind of corporate jargon, the informal kind that people use when they want to show emotion at work, we demonstrate another kind of understanding. "Kick ass and take names," "Fire one across the bow" and "Where the rubber meets the road" are all variations on the frame "Business is a competitive guy thing that only an athlete or a warrior can truly understand (or excel in)."

I used to commiserate with my coworkers who grew up in countries outside the U.S. Both I and they understood many of the common corporate jargon expressions ("in the end zone" being one example) only in their corporate context. I had no idea what "in the end zone" meant in non-business life -- my dad was into baseball more than football - but I used the expression anyway. My immigrant friends said the same thing. One day when my friend Duy parroted an expression not quite correctly, saying "When push comes to shelf," I thought, "That makes sense - you could push a shelf. What's the difference between a push and a shove, really?" and it hit me that the act of learning corporate jargon, for a non-athletic female or an immigrant male, was a huge (and essential) key to the kingdom, a sign that that female or non-American male had worked to earn membership on the team.

We don't have to talk and write like robots at work. We can talk about the culture around us like it's a living thing, because it is. It's the most important thing in the mix for us as working people and for our customers, but we ignore it, like fish who can't see the murkiness of the water we're swimming in.

If you want to change the culture in your organization, start with the language. Get rid of the corporatespeak boilerplate and speak to one another the way humans do. That means losing the royal "We" for starters (who's We?) and nuking the formal pronouncements that begin "Effective April 15, it will no longer be permissible to...." It means explaining your actions and asking for feedback on your decisions. Most of all, it means remembering that the people we work with are humans first and employees, second.

You can put a human voice in your company, in your own branding and in every area of your professional life. We don't have to use Alpha Male jargon at work, or zombie corporate jargon or any jargon at all. We can say "I'm overwhelmed right now, to be honest" or "I don't understand what you're asking me to do" or "My gut hates that idea." We can speak our truth the way humans do. Won't we be much stronger as working people, citizens and family members, when we do?