The refugee crisis in Europe - the worst on the continent since World War II - is a daunting challenge for European leaders who are struggling with expressing solidarity and empathy with refugees coming to Europe in search of a brighter future for themselves and for their children. To deal with this crisis Europe should adopt a "whole-of-society" approach involving civil society and the private sector, since governments can't handle this enormous task alone.

There is no end in sight to the current refugee crisis. According to a recent UNHCR report, almost 60 million people were forcibly displaced in 2014 from countries such as Syria, Iraq, Eritrea and Afghanistan, out of which 19.5 million were refugees. Among the refugees, half of the 19.5 million are children. Many of these are now finding their ways to Europe. The UN estimates that 700,000 migrants will arrive in Europe this year and the same number in 2016.

Fortunately, companies and civil society are already pulling their weight. That said, as the crisis grows by the day, there is still significant room for a wider engagement in actively aiding the refugees. There are multiple ways in which European corporations can strengthen Europe's capabilities to adequately deal with the crisis, as well as concretely impact the day-to-day conditions of the refugees:

1. Donating to key humanitarian response organizations, such as UNCHR, the Red Cross or MSF
Many organizations engage in firsthand work with refugees, and the bulk of them rely on donations to keep on going. Some of the most impactful organizations aiding refugees are the United Nations High Commissioner on Refugees (UNHCR), Red Cross, Save the Children, Médecins Sans Frontières (MSF) International, International Organization for Migration (IOM) and others. The Red Cross, for example, is operating reception centers in Croatia, Serbia and Greece, offering refugees temporary shelter, food, water and hygiene. Furthermore, the Croatian Red Cross has issued an emergency appeal for the refugees in Croatia, and a part of the raised financial resources shall be used for the distribution of humanitarian relief, as well as for the activities of emergency response units to be deployed if needed.

3. Donating goods and services in-kind
Companies throughout Europe have been donating various goods and services. Food producers offer refugees nourishment essentials, transportation companies transfer refugees free of charge, clothing companies donate clothes to those who often embark on perilous journeys with nothing more than a small bag of personal belongings. 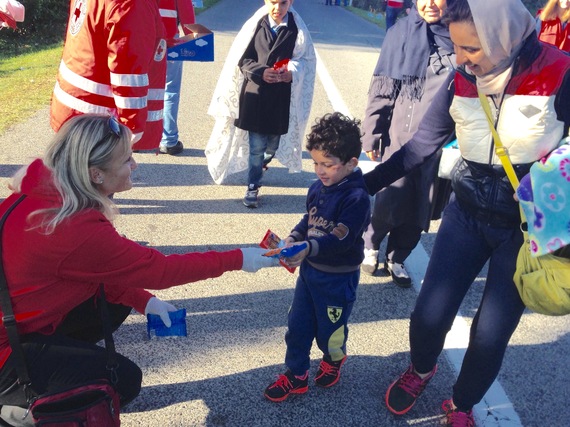 5. Matching skills with jobs
Many of the refugees, especially those from Syria, are young, well-educated and skilled in critical sectors where Europe lack human capacity. By helping to match refugee's skills with employment and apprentice opportunities as well as offering training to those refugees who lack such skills, companies can make an important contribution, especially in a continent where the population is aging and where birth rates are low. Making sure immigrants get jobs takes pressure away from public spending and could even mitigate social and political tensions in Europe.

Ultimately, the refugee crisis is a European challenge that requires European-wide approaches. Clearly, governments cannot tackle this issue alone. Help from the business sector is important - and in some cases even crucial. The European business community not only has lots to offer here, but can also greatly benefit from doing so. As business leaders in Europe, let us take our responsibility to help ensure Europe can cope with what is clearly one of the greatest challenges of our time.