This weekend saw the opening of a type of film exceedingly rare in our nation's cinema history: a wide-release kid's movie with an African-American girl as the protagonist. (Akeelah and the Bee and Princess and the Frog are pretty much the film's only peers, though 2015 will add Home to the tiny list). That was reason enough for me and my daughter to be excited about the new remake of Annie. (As my daughter put it, "She has hair like me!")

But the critics have (somewhat eagerly) piled on to tell you to not see the movie. The level of dismay, disappointment, even venom seems surprisingly high, with a Rotten Tomatoes critic's score of 29. Many wanted the movie to be a "statement" film, a burden often foisted on films featuring people of color (as opposed to, say, Penguins of Madagascar). Christian Science Monitor sniffs that the movie doesn't investigate the class divide. Meanwhile, New York magazine complains that the movie failed to create "a powerful new myth with a particular African-American slant," adding that the "black angle" is neutralized.

It is strange to expect a wish-fulfillment story like Annie (no matter which version) to offer trenchant commentary on anything, and especially unsettling when a critic born in the Jim Crow era decrees that actors of color must still deliver some specific "black angle" in 2014. While I acknowledge that this film isn't without flaws, I also think these reviews obscure the fact that the film has things to offer if you accept it for what it is: the Annie tale told in ways that kids today might relate to.

There are a lot of good reasons to see this film (and not just that the lead is played by a girl with her natural curls flying like a flag of pride). When we saw Annie, my daughter, her friends, and the dads and moms in the audience left the theatre talking about what so many critics have glossed over: the reasons you should see the movie. 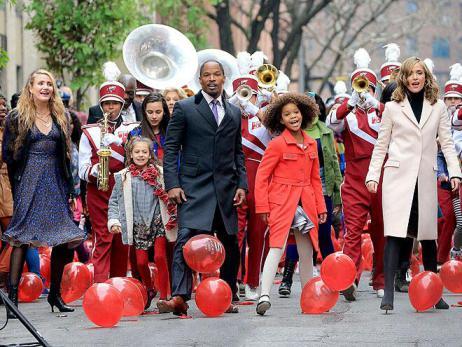