P.T. Barnum may have said it best, but when it comes to hornswoggling suckers, few compare to the fast-talking peddlers of utopian technologies who have become the new kings of crony capitalism. Feasting on billions in federal grants, subsidies, tax breaks, loans, and mandates, there is hardly a single uneconomic, unsustainable, cure worse than the disease, violates-the-second-law-of-thermodynamics idea left out there that hasn't been used to separate progressives from ... other people's money.

What makes it so easy to cheat these people?

By now we've all gotten Solyndra fatigue from the endless parade of articles about "green" companies whose main claim to fame is sucking up greenbacks. All of them earned the love of progressive pundits, and their places at the public trough, by promising to reduce the nation's carbon footprint while creating high paying jobs. None of them have done so, yet how many failures will it take before progressives wake up to the fact that they are being sold a bill of goods?

Meanwhile shale gas, the single most substantive energy industry breakthrough that has actually delivered on both of the above promises--at scale, financed privately, paying rather than consuming taxes, turning once-struggling farmers into millionaires--is met with fear and loathing by these same shlamazels, eager to fall prey to the next fast-talking charlatan who promises to magically suck carbon dioxide out of the air and turn it into ethanol. Yes, of course, improper fracking raises ground water contamination concerns that must be addressed. But there is no arguing that substituting gas for coal has reduced the nation's carbon footprint while creating an explosion of high-paying jobs.

Judging a scheme by its stated intentions may be the proven path to legislation, but it is a boneheaded way to make technology "investments" if you actually expect the technology to provide the promised benefits. At least the venture capital industry has finally lost its appetite for cleantech deals, giving up on plans to unload their portfolios full of unworkable turkeys onto the unsuspecting public via the time-honored means of the Initial Public Offering (IPO). Ever since Facebook's bankers and insiders sucked all the juice from the social networks' vaunted IPO, leaving retail investors to gnaw on dry rinds, the hoped-for returns from alternative energy ventures has turned into a fading mirage. Now, with few corporate acquirers willing to pick up money-losing cleantech deals -- other than perhaps some bottom-feeding Chinese state-backed firms trying to corner "strategic" markets (more power to them if they want to sell us stuff for less than it costs them to make it) -- all we're left with is a money-pit of zombie companies waiting to be put out of their misery.

And yet against this harsh reality, there it was in the recent Fiscal Cliff deal -- more tax breaks for windmills, electric cars, biodiesel, algae (algae?!), and of course 14 different flavors of ethanol. How in the world do you get vocal, committed progressives who genuinely care about world hunger to buy into the idea that we should turn food into fuel on a global scale? The same way you get the Sierra Club to avert its eyes when windmills slaughter birds. Call in a crony capitalist promising green energy utopia!

Right on cue, President Obama's pick for Treasury Secretary, Jack Lew -- former lawyer for Van Ness Feldman, a firm that brags about sucking $3 Billion of federal financial and policy support out of Washington for cleantech clients -- bounds onto the stage. If approved it will be Jack's turn to dish out Treasury Department grants to well-connected solar energy interests that have totaled $13 billion so far. Do you think his former clients are rooting for him?

And what is it about trains that infatuates progressives to the point that they're eager to sell their children -- and yours -- into indentured servitude so bankrupt governments can finance everything from streetcars to light rail to bullet trains, none of which can possibly earn enough money to cover their operating expenses, much less repay the capital? One would think progressives who studied economic history would be more skeptical. After all, some of the worst miscreants in the annals of crony capitalism -- abusers of the public purse, corrupters of entire legislatures, defrauders of widows and orphans, destabilizers of stock markets -- came from the train business.

Yet today, after investing half a trillion tax dollars over the past half-century to build an Interstate Highway System that ranks as the largest and most successful public works project ever conceived, progressives go weak at the knees when some huckster who couldn't raise two cents from private investors whispers "train" in their ears. Meanwhile, unsubsidized inter-city bus entrepreneurs like Megabus, Bolt and Fung Wah are getting people out of their cars for a fraction of what it costs fat cats to ride the money-losing Acela.

And what do taxpayers get for all this malinvestment? Not much, other than to see a few eco-warriors line their pockets, skipping town before the bills come due. 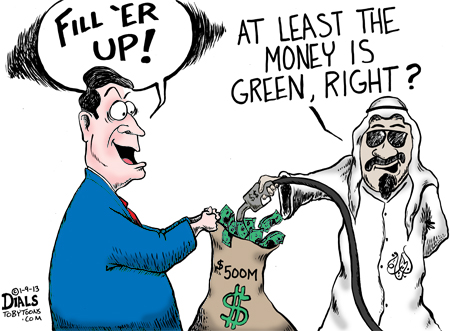 Speaking of which, Al Gore recently became richer than Mitt Romney not by inventing a new product or service that vastly reduces our carbon footprint, not by backing a slew of successful startups that did the same, but by selling the eyeballs of his fellow Americans to Arab oil interests. The derisive laughter coming from right wing fever swamps over the Al Jazeera sellout is deafening, as the chagrined mainstream media serves up nothing but crickets. Talk about crony capitalists who fake left and go right. Big Al had a net worth of perhaps $2 million when he left the White House and now stands to make $100 million in one transaction. And not a cleantech deal, mind you.

After signing up with storied venture capital firm Kleiner Perkins Caufield & Byers to be the chief rainmaker for their strategy to get rich by investing in companies that combat global warming, the former veep led them into a series of disastrous "alternative energy" investments that has made KP a laughing stock. Yet through the magic of VC management fees, our Nobel Prize-winning inventor of the Internet came out smelling like a rose, despite the fact that the pension funds and university endowments that bought into his half-baked schemes had their heads handed to them. You can't make this stuff up.

So ask yourselves, saviors of the planet, why do you fall so easily, time and again, for crony capitalists' too-good-to-be-true schemes designed to feast on public dollars? Wouldn't a wee bit of skepticism be in order when setting public policy? Don't you want this technology to actually work? For all our sakes, when doing your due diligence can you at least pretend that the money being flushed down a rathole is your own?