How did Curiosity snap that "selfie" without getting its robotic arm in the picture?

That's what curious folks have been asking about the amazing self-portrait the rover recently took to mark its first anniversary on the Red Planet. 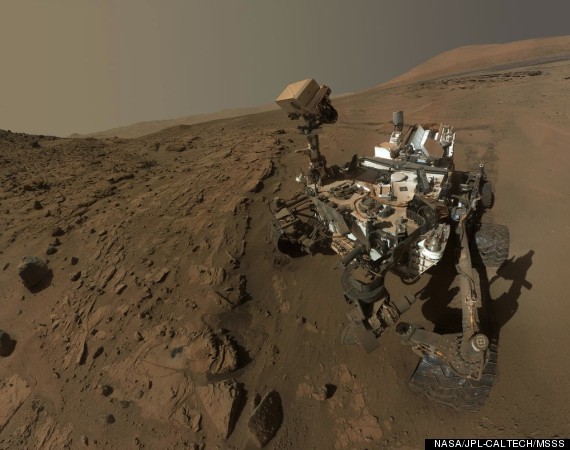 HuffPost Science asked you to weigh in with your theories, and you came up with some that were, well, pretty weird.

(See slideshow below for more).

For the real explanation, we turned to the scientist who created the "selfie" image, Michael Ravine, advanced projects manager at Malin Space Science Systems in San Diego:

"We stuck the arm out in front of the rover and used the arm to shoot enough images to cover the entire rover and all the terrain around it," Ravine told HuffPost Science in an email.

Okay, so the selfie isn't a single image but a mosaic of many separate images. We get that. But why is it that the arm "holding the camera" -- the Mars Hand Lens Imager, or MAHLI -- doesn't appear in the picture?

Ravine answered that question with one of his own:

Q: Why isn't Bill Clinton's arm in this picture?

A: He bent it at the elbow away from the camera, so it's outside the camera's field of view. The explanation for the self-portraits we've shot of Curiosity is the same. For the sequence that took the self-portrait mosaics, the arm is mostly crooked at its "elbow." If you were standing next to the rover when these images were taken, it would have looked something like this simulation: