After the senseless death and tragic funerals of two young New York City policeman, cops have got to be thinking about assassination. "I want to go home to my wife and kids," said a cop to the New York Post." I am concerned about my safety." 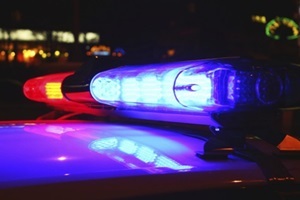 On NBC's Meet the Press," NYC Police Commissioner William Bratton said that cops across the country "feel under attack"

They have good reason to worry. Getting killed is a hazard in many occupations, but there is one glaring difference between death risks of law enforcement officers and those of other dangerous occupations: only police officers face the threat of murder as a part of their job. No one is out trying to kill fisherman or loggers or garbage collectors.

A cop on the street endures daily contact with drunks, the mentally disabled and violent criminals. They endure life-and-death situations on a daily basis.

However, the misconception that police work is dangerous, propagated by the media and police unions, could become a self-fulfilling prophecy-- especially if police believe that they are going into deadly battle when they head out on patrol. They are likely to be nervous and trigger-happy and might affect their decision-making in a stressful situation.

The fact is: being a policeman is not one of the most dangerous jobs you can have, according to statistics from the Bureau of Labor.

In five years, 2008 to 2012, only one policeman was killed by a firearm in the line of duty in New York City. Police officers are many times more likely to commit suicide than to be killed by a criminal; nine NYC policemen attempted to take their own lives in 2012, alone. Eight succeeded. In 2013, eight NYPD officers attempted suicide, while six succeeded. If police want to protect themselves, a wise move might be to invest in psychiatric counseling, rather than increased firepower.

2013 had the fewest police deaths by firearms since 1887 nationwide. 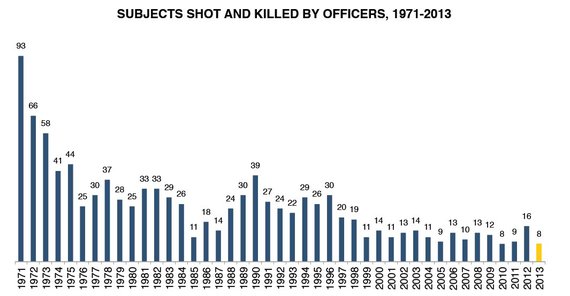 But the trend has been clearly downward in the last 40 years. Police work is getting progressively safer compared with historical averages:

Statistics are drawn from the police friendly National Law Enforcement Officers Memorial Fund which also show that felony killings of police dropped by 50 percent from 1992 to 2013 from 10,000 to 5,000 annually per 100,000 residents.

Statistics are notably unreliable both from the federal government and from law enforcement friendly sites. The best statistics come from the New York City Police Firearms Discharge Reports.

The report for 2013 noted the following:

--- In 2013, no officers were shot and killed and police killed eight subjects.

Out of approximately one million police and law enforcement personnel, with 126 deaths per year, the death rate for police is 12.6 per hundred thousand.

The most dangerous job in the U.S. is being president. Eight out of 44 presidents died in office, about 18 percent. Four were assassinated, just over 9 percent.

Most policemen killed on the job die in accidents (mostly auto), not from firearm assault, according to the FBI.

According to FBI figures (which are slightly different than other tabulations), 14 of the 76 police deaths in 2013, nation-wide, were due to auto accidents --- when the officer wasn't wearing a seatbelt. Tragic for sure.

Of the 76 cops who died in the line of duty in 2013, 18 of them were from gunfire. The rest were traffic fatalities or slips and falls.

About 40 percent of officers (30) who die in the line of duty are homicides, which would give police a murder rate of 3 per 100,000, compared with the average national murder rate for the general population of 5.6 per 100,000.

The average citizen of Chicago had a murder risk of 18.5 in 2012, more than three times the murder risk of policeman. Police killings are almost always classified as line-of-duty.In reality, police don't draw or fire their guns very much.

In 2012, 80.2 percent of officers who were assaulted in the line of duty were attacked with personal weapons (e.g., hands, fists, or feet).

4.3 percent of the officers were assaulted with firearms.

The reason a policeman's job is getting safer is simple. There has been a dramatic drop in crime in the last two decades. Less crime means safer working conditions for the people who try to stop it.

The act of policing needs to be safer. Use body cameras. Cut down on the number of traffic accidents. Mandate the use of seat belts on duty. Enforce better and more professional training to avoid dangerous situations, and offer better counseling to deal with the stress of the job.

Attacks on police are a great media story, but if the false narrative -- that policing is getting more dangerous -- continues to spread it will have a significant effect on how police do their jobs --- making them more fearful than they already are, with increasingly deadly results for the general public.

This story was cross-posted in The Washington Monthly.