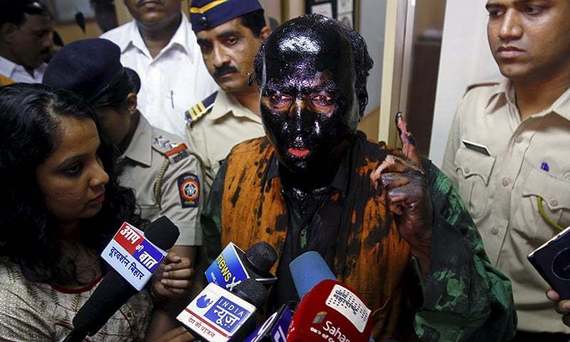 Perhaps some of the Indian readers won't like what I am going to write. After all, Pakistan by no stretch of imagination is a tolerant country itself. They may simply ask me to shut up and mind my own business or concentrate more on the problems of my own country.

My first defense is that as a Pakistani, I have witnessed my country going down the slope due to religious intolerance. I have not been in denial and therefore written extensively against it and have at times been reprimanded by my own countrymen for supposedly maligning Pakistan's image in the international arena. And yet, I would always insist that whatever I wrote was due to concern for my motherland.

My second defense is that I have always been genuinely interested in India. Part of this interest is academic and is springing from the fact that I am a student of Political Science. And part of it is because I think identity is a complex and overarching phenomenon and consequently I feel affinity to Indians. I have already articulated this in my article on Huffpost titled as "A Pakistani and an Indian".

Today India is making the headlines due to wrong reasons. Over the past one year, after BJP win in a landslide, India has witnessed increased religious intolerance. Yes there is a difference between India and Pakistan with respect to religious intolerance both in form and intensity. One can persuasively argue that India has not seen suicide bombings against minorities and actual deaths from religious violence are far lower. But while India may compare favorably to Pakistan, nevertheless since last year it has witnessed deterioration when compared to its own past. This is a fact and not some media cultivated fabrication, no matter what spin you give. In the past year, the intolerant voices have gone louder and worse they appear to have an implicit backing of the state. The fringe right is no longer that fringe, it is making its presence known in the mainstream.

One of the major problems which many from the educated middle class overlooked while voting for Modi ( for development reasons) was the fact that the core support of BJP is hardline and after being in absolute power the party had to appease them. Before the elections despite clear warning signs, many were simply dismissing such possibility from occurring. The argument at that time was that with moderate and modernist urban middle class behind the recent resurgence of Modi, the focus of BJP will be more towards governance and leaner and efficient government rather than communal politics. The electorate was so sick of the incompetency of Congress that it was literally willing to overlook the dangers.

And now the evidence is showing as to how wrong those assumptions were. Not only the hardliners have literally taken over the control but what makes the entire situation ironic is that the many educated people from the urban middle class are in denial. Rather than opposing the excesses, many are simply calling critics as "sickulars" "pseudo seculars /liberals" or terming it as a conspiracy of Congress to malign BJP.

Whipping up communalism by BJP and RSS is generally justified by citing examples as to how Congress too has tried to play on the wicket of communalism by indulging in minority appeasement. Moreover, every time some violent incident takes place, rather than being critical the focus of many is to simply deflect by referring to either 1984 riots against Sikhs under Congress rule or some contemporary incident where member of BJP has been harmed or where minority has acted violently against majority. The critics ( seculars in almost all the cases) are then mockingly asked to show the same level of anger which they show when minorities are attacked.

There is a huge problem with this entire approach. First of all it is trying to create false equivalences. Minority appeasement does not create the kind of dangers which whipping up majority communal sentiments does. Although one could make a normative arguments against both but whipping majority communalism can lead to tyranny of the majority and also to violence at a much larger scale. It's potential to inflict harm is way greater than so called minority appeasement.

Moreover, India is a diversified and complex country with many ethnic and communal cleavages. To keep the social fabric cohesive in the face of so many cleavages which can always explode is an extremely difficult thing. And to keep everything together with parliamentary democracy is even more difficult. Many of today's loathed concepts like "minority appeasement" have in fact played a role in maintaining social cohesiveness under the democratic umbrella. What is being called appeasement may be in some form an essential compromise to ensure that the country's social fabric does not tear apart along various fault lines. Indian secularism is not merely separation of church and state but it espouses special minority protection.

Yes, one can argue that perhaps Congress had gone overboard and had tried to extract electoral mileage out of it but to dismiss the entire concept as nonsensical and to draw equivalences with violent majority communalism is also not correct.

Second, it is much easy to see that intolerance is being deliberately and explicitly perpetuated by organizations like RSS and political parties like Shiv Sena. Yes, violence may have occurred during Congress rule also but did they deliberately whip up hatred against some groups? Did they politicize beef in the same way? Did they drew derogatory comparison between Hindus and minorities by calling former the Ramzadas (off spring of Lord Ram) and latter Haramzadas (bastards)? Did they initiate movements like Ghar Wapsi? All these things have occurred during the Modi rule and his government is either directly involved or at least shown reluctance in stopping its allies.

Yes, anti Sikh riots occurred during Congress rule and there one can blame its leadership to incite violence against a minority group but the way that incident is being used to deflect current malpractices is plain wrong. Moreover, Congress leadership of the time may have had falling out with the Sikhs but there is nothing in ideology of Congress party which leads to creation of systematic discrimination against minority groups.

Eventually what is perhaps at stake is the very soul of India. Over the years India has tried to pride itself as a tolerant and multi-ethnic state. It has contrasted itself with Pakistan ( which was carved out of British India) by claiming to espouse secular and more liberal values. It's case against partition actually hinges on the claim that in India minorities could have lived freely without any fear.

This very idea is now being contested and I am not sure whether denial of the educated Indians is helping the cause. And denial can be dangerous as it removes the pressure from the government to put a stop to militant elements.

I have seen it happening in my own country. What has baffled me over the years was the denial of my own countrymen over the existence of religious menace right in their midst. There was a time when literally every barbaric act carried out by Taliban was construed as a conspiracy to malign them or simply interpreted as a "reaction" to USA's drone campaign. Military action against the militants was simply ruled as a action against our "own" people. It is only recent that the narrative has begun to change and finally after going through hell, the nation has finally beginning to crawl out of the pit.

Indian ground realities are different with respect to the form of religious intolerance but denial is assuming the same dangerous proportions. And denial always encourages extremists by giving them soft support.