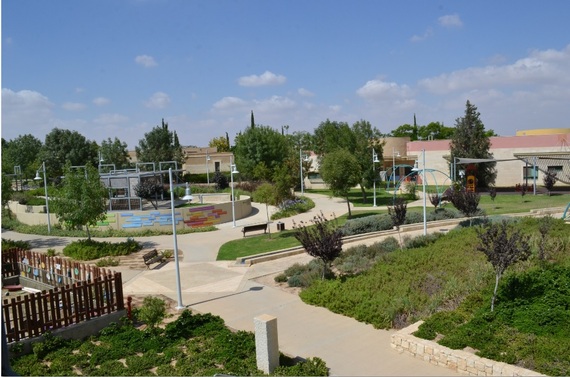 It is a rather unusual scene that appears to be a mirage in the hot Negev desert. In southern Israel, prison inmates from local jails can be seen every week, walking wheelchair-bound adults from a rehabilitative village for the severely disabled.

Every Monday, a group of these disabled residents, eagerly await the visits from the prison inmates, whom they recognize with excitement.

Located in Ofakim, the Aleh Negev-Nahalat Eran Rehabilitation Village houses 138 permanent residents, both severely disabled young adults and children, who are almost all immobile and physically or mentally impaired.

Sergey*, an inmate from a local prison, wheels around Lior, a resident of Aleh who appears to be around 30 years old, wheelchair bound with limited control of his arms and hands. Lior doesn't speak but when Sergey brings him to a small fountain, his smile and laughter expresses his joy as Sergey playfully splashes him with water and touches his nose.

"After a while, you see that each person here has something special to him," Sergey said. "When Lior sees me, he jumps in his wheelchair. That's his way of showing that he recognizes me."

Sergey has been visiting Lior for about a year. "Overtime, I also learned to understand when he is angry, sad or happy."

Eight years ago, the Israel Prison Service launched this one-of-a-kind program with Aleh Negev to help rehabilitate nonviolent inmates by having them volunteer with developmentally disabled adults residing in the rehabilitation village in the Negev.

"The goal is to give these prisoners during their jail time a set of tools to help them when they return to society and a new perspective on life," explained Orna Ben-Tal, who helps direct the program in the South.

"The Israel Prison Service sees a very important social mission here. We don't just lock these lawbreakers away in jail cells for the next few years only to release them back as the same people," she said. "The Prison Service wants to contribute in a positive way to Israeli society and that is why there are programs like this to help rehabilitate lawbreakers and enable them to come out as better people."

She says the prisoners who work with the disabled at Aleh Negev are carefully selected and screened.

"It is clear that we can't just accept anyone to this volunteer program, particularly because we are dealing with a population that is vulnerable and weak. There are no violent offenders for example, nor murders, pedophiles or rapists, and those who are drug and alcohol addicts are not accepted into the program."

The inmates selected are noted for good behavior at the prison and their ability to get along well with others.

Once selected, the inmates go through training at the prison and with representatives from Aleh Negev to prepare them for the volunteer work with the residents. When the inmates return to jail after their volunteering hours in the village, support staff at the prison will sit with them to hear about their experiences and give them further insight and advice. In addition, once a new prisoner joins the volunteering project at Aleh, he is teamed up with an inmate who is a "veteran" volunteer and helps integrate him into the volunteering work at the village.

"We have an inmate who has been volunteering for the past eight years, since the project began," Ben-Tal said. "Another inmate who got released a couple of years ago, continues to visit the village and volunteer with the same disabled man he visited when he was in jail doing this program."

Dressed in regular clothing, the inmates look like the village rehabilitation workers or regular volunteers at the village and the residents cannot differentiate.

"For us, they are volunteers and not prison inmates," said Stav Herling-Gosher, who runs the public and international relations for Aleh Negev. "At the village, the residents see them as regular volunteers, although the families of the residents are aware of their background."

The interaction between the prison inmate and the disabled person is a powerful experience for both.

"The prison inmates actually forge connections with the residents who suffer from the most severe and complex disabilities. It is really special to see the kind of bonds that they form together," said Herling-Gosher. "Just to see our residents' eyes light up when they see the inmates come to visit warms the heart.

"We don't want our disabled residents to be in their rooms all day, staring up at the ceiling. We want them outside, breathing the fresh air around the beautiful flowers here, interacting with people."

Sergey has four favorites that he enjoys working with over his past year of volunteering.

"I never imagined that I would do this kind of volunteering in my life. I didn't want to come here at first and it was difficult in the beginning. At first I would compare this place to life in jail. You're just passing the time, eating and sleeping. But there is a lot more to it.

"You grow, you see things different - it's a process," he said as he playfully sprays water on Lior, eliciting smiles from both. "The most important thing you can have in life is your health because it's your freedom. I've learned to appreciate that."

Kaliq*, a Beduin, volunteers with Shai Cohen, 33, wheeling his wheelchair around the Aleh Negev village's beautiful gardens and accompanying him during morning activities.

"I treat everyone at the village the same here," Kaliq said. "We are all human beings and one family. How we are born comes from above, comes from God. No one forced me to do this [volunteer work], it's something that I wanted to do.

"When Shai smiles, that is the biggest thank you that I can get. You have to give them all your heart," he said, holding Shai's hand.

For others, like the prison inmate Yossi*, the connection he has with the disabled residents, leaves him with a good feeling.

"After each visit, both me and the resident feel good about ourselves," says Yossi who sports tattoos along with a black kippa. "You can see it in the eyes. Even though we can't converse and he is unable to say his name and introduce himself, we have our own way of communicating. The eyes say everything."
Ben-Tal relates a story that another prisoner told her of his experience at the village.

"Once, a very good-looking inmate told me that he discovered something about himself during his volunteer work," she said. "He told me: 'I look like a model. When people see me, they first admire me and aren't repelled. When you come here [to the village], you see the outside of the people; they are immobile. But when you look deep inside into who they are, they are pure good, while I feel rotten inside.'
"It is not easy to come to a place like Aleh Negev, but the experience here can change even the most hardened people," Ben-Tal said.

Indeed, the program received international recognition in 2011, when the International Corrections and Prison Association (a nongovernmental organization in Special Consultative Status with the Economic and Social Council of the United Nations) awarded the Offender Management and Reintegration Award to the Prisons Service.

Established in 2005, Aleh Negev-Nahalat Eran is a 25-acre, state-of the-art rehabilitative village that serves as a home for people with intellectual and developmental disabilities and physical handicaps as they grow from adolescents into young adults. The village offers rehabilitative frameworks including a paramedical center, high-dependency ward, hydrotherapy pools, a special education school and a vocational center. Often times, the prison inmates will accompany residents to different workshops at the vocational center, helping them in the ceramics studio for example.

"The disabled here cannot function independently; their disabilities restrict them to wheelchairs and they cannot leave the village on their own. But we do everything we can to ensure that they live a good quality of life," explained Herling-Gosher. "The prisoners, among the many other people who volunteer including high school students, pensioners and soldiers, are crucial in helping us to do that."

The former major general in the IDF reserves, Doron Almog, who is the founder and chairman of the Aleh Negev village, is proud of the project with the inmates. A military hero in army units who took part in historic operations like the Operation Entebbe airport rescue in 1976, Almog's son, Eran was born with severe autism and developmental disabilities. He named his son after his brother, Eran, who was killed in the Yom Kippur War. Eran Almog was one of the village's first residents until his untimely death at the age of 23 in 2007 and the village is named after him.

Almog believes his son had the most profound influence on his life.

"Eran, who never spoke even one word; who never called me Abba [Daddy], taught me true commitment. He inspired me to become an advocate for others like him - those pure souls who are completely dependent upon others but who lack the ability to speak up for themselves," he said.

He believes that the special needs population of Israel can have a profound influence on anyone, including prisoners and can help create a better society.

"The White Collar Criminal Rehabilitation Program at ALEH Negev-Nahalat Eran, where prisoners work with severely disabled residents on a steady basis, is an outstanding example of the dramatic social influence that can be made by volunteering with the most vulnerable members of society in order to bring about tikkun olam [repairing the world], to create a society of excellence in Israel," asserted Almog.

*Names have been changed at the request of Israel Prison Service.

The article was originally published in the Jerusalem Post Magazine.