How did people in the Middle Ages tell time?: originally appeared on Quora: The best answer to any question. Ask a question, get a great answer. Learn from experts and access insider knowledge. You can follow Quora on Twitter, Facebook, and Google+. 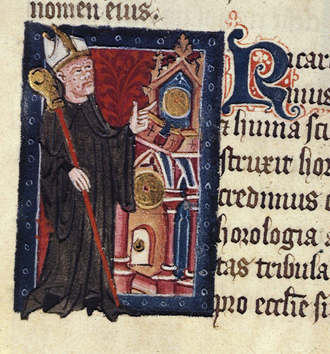 Most peasants or farmers would not have had a great need to know precisely what hour it was, and would have divided their day according to the passage of the sun. Timekeeping was more necessary for monastic communities, which maintained the Liturgy of the Hours — a daily cycle of communal prayer that required them to come together at seven set times each day. These were:

Larger monasteries and the chapter houses of cathedrals would have rung bells to summon the community to these prayers, and peasants and farmers living nearby would have had their day divided up by the ringing of these bells. These monastic communities would have kept track of the time to summon the monks to these prayers by various means: well-trained body clocks from years of practice, water clocks, sundials, and the use of an astrolabe or quadrant to take readings from the sun or stars to calculate the time.

All of these techniques were cumbersome and not exactly foolproof, so there was an incentive to find a way to mechanize time-keeping. Experiments with gearing systems and weights led to the invention of the foliot escapement and the first truly mechanical clock sometime in the last decades of the Thirteenth Century.

It is likely, but not certain, that this breakthrough happened in a monastic environment, but the new machines quickly spread through the Medieval world. By the mid-Fourteenth Century, most towns had at least one clock, because they could be used to regulate working hours and allowed craftsmen to charge for their labor by the hour. For the first time, people were able to measure time precisely enough to be able to make time itself a commodity.

These new medieval clocks developed very quickly in sophistication. Firstly, they were miniaturized very rapidly — they went from huge "mainframe" sized machines to small semi-portable "desktop" versions in about the same time that modern computers made the same transition. Secondly, they quickly went from machines that simply told the time to ones that performed quite complex calculations. Working in the 1320s, the abbot of St. Albans, the scholar and astronomer Richard of Wallingford, built an astronomical clock that mapped the movements of the sun, moon, and stars in real time, predicted eclipses, gave the phase of the moon, and indicated high and low tides in London, as well as telling the time and striking the hours. It took eight and a half years to perform its full cycle of calculations and was by far the most complex machine built up to that point.

So in the Middle Ages, people went from a very crude sense of time to a revolution in their thinking and in the way that they measured time. The invention of the mechanical clock was one of the Medieval world's most remarkable legacies for later ages and inventions like Wallingford's machine were the ancestors of later calculating machines and of modern computers.