Thursday morning was a wonderful and terrible morning for Hollywood. Some filmmakers got the once-in-a-lifetime thrill of hearing their names called as Oscar nominees (or, if you're Meryl Streep, 19-times-in-a-lifetime). Others were left empty-handed.

But whether it was a wonderful or terrible morning for your favorite movie of 2014, it was a decidedly magnificent day for math. The day before Oscar nominations were released, I published my mathematical predictions for which films and actors would get nominated. I only used data from other award shows and critic groups -- no personal hunches or opinions were involved. Let's see how well the numbers did:

The math nailed this one. Among the eight nominees, seven were in my top seven. That is, all seven movies with likelihoods above 70 percent were in fact nominated for best picture. 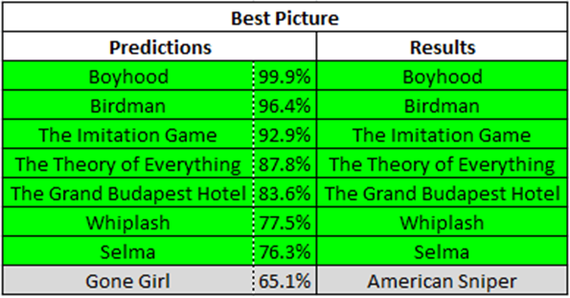 The one surprise, mathematically speaking, was American Sniper. What happened there? First of all, it is entirely reasonable that events with low-percentage chances happen. For instance American Sniper was only supposed to have a 13 percent chance of getting nominated -- that wasn't necessarily wrong. It just means that an event with a low-percentage chance occurred this year.

Which movies got slighted, according to the numbers? The films I had in 8th, 9th and 10th -- Gone Girl, Nightcrawler, and Foxcatcher -- are all on the outside looking in. All this means is that lots of other groups honored these films, but the Academy failed to do so in the best picture category. In all likelihood, these three were the biggest victims of the fact that only eight films were nominated this year, instead of the 9-10 level we've seen over the past five years.

On four out of the top five, the math did great: the data favored Michael Keaton, Eddie Redmayne, Benedict Cumberbatch and Steve Carell, and sure enough, all four of them heard their names called Thursday morning.

The one to slip in was Bradley Cooper, likely beating out Jake Gyllenhaal. Cooper is the single most surprising nomination according to the numbers. He received no nominations from the Screen Actors Guild, the BAFTAs, the Golden Globes (comedy or drama) or the Critics Choice Awards. Certainly, congratulations to him for the nomination, but this is going to put him at a severe disadvantage to actually win the award next month.

Also, credit goes to the power of math on predicting the absence (some would call it a snub, though I don't delve into the realm of opinion) of David Oyelowo from Selma. He was widely predicted to garner a best actor nomination, and the math correctly indicated that he would not.

Another big win for math. My top four all made the Academy's list: Reese Witherspoon, Felicity Jones, Rosamund Pike, and Julianne Moore. The numbers predicted a close race for the fifth spot between Jennifer Aniston, Amy Adams and Marion Cotillard, and the last of those three women ended up taking home the final nomination.

The Academy does not release vote totals (if they did, it sure would make my job easier!), so there's no way to know if Cotillard ended up in first or fifth. All we know is that she overcame her lack of a BAFTA, SAG and Golden Globe nomination to earn her second Oscar nomination.

This was the most impressive category. The math went perfect, predicting all five of the eventual Oscar nominees as the five most likely to be nominated.

How did I do it? To be honest, this one wasn't the most difficult category, since the same five men received both SAG and Golden Globe nominations. The list wasn't identical for the BAFTAs, Critics Choice Awards and other critic circles, but the data correctly indicated that the five SAG/Golden Globe nominees would carry the day.

Another 4/5 score, just like Best Actor and Best Actress. The math said the top four were Patricia Arquette, Keira Knightley, Emma Stone and Meryl Streep. Indeed, all four of them will be walking the red carpet in February. The data gave scores above 20 percent to three additional actresses: Jessica Chastain, Naomi Watts, and Laura Dern. Of those three, Dern ended up with the coveted final spot.

To clarify, these were all nominee predictions, not Oscar predictions. There is an important distinction, because a film or actor can be likely to receive a nomination but unlikely to win for a variety of reasons. I'll be coming out with my 2015 Academy Award predictions shortly, and they will be updated throughout Oscar season.

Now that we know the nominees, the 2015 Oscar season is officially underway. So let the race begin.

Ben Zauzmer, an applied math major at Harvard, uses only data -- no personal hunches or opinions -- to predict the Oscars. He has served as a columnist for The Hollywood Reporter, and his work has been featured in The Wall Street Journal, The Economist, and publications across the globe. Follow him on Twitter: @BensOscarMath.