It should come as as no surprise to any observers of the film-making process (particularly original stories) that what actually ends up on the screen is a result of a series of edits, evolutions and adjustments to the original story of a film. Just a quick glance at the history of Movie Legends Revealed shows examples like E.T. evolving from a horror film to a family-friendly drama, Godzilla evolving from a giant ape or a giant octopus into his more familiar final form and Darth Vader going from being Anakin Skywalker's killer to actually BECOMING Anakin Skywalker.

However, Disney's recent hit film, Frozen, had a particularly interesting inspiration for its evolution - as it turns out, it has a song to thank for "rescuing" Princess Elsa from being the villain of Frozen. 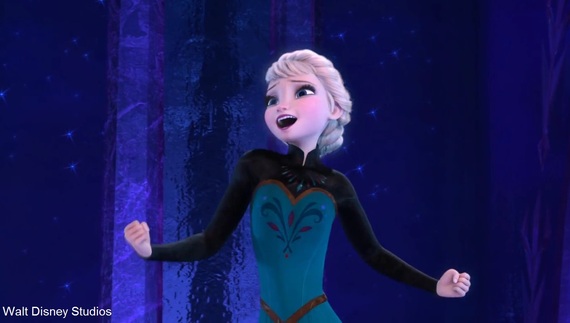 So how did the future hit song "Let it Go" change the entire scope of the film? Let's find out!

While much of Frozen is an original story, the bare bones of the story is based on Hans Christian Andersen's classic fairy tale, "Snow Queen." The Snow Queen is a fascinating character. In the original story, she is not even the driving force behind the action (it is instead a magical troll mirror that causes the male lead to become a jerk) although she does, indeed, take advantage of the situation to kidnap the male lead. Over the years, when the story has been adapted, the Snow Queen often takes over as the main villain of the piece. When the final screenwriter of Frozen, Jennifer Lee, began working on the film, director Chris Buck and producer Peter Del Vecho had already come up with a basic idea for the story (which had evolved from the title Anna and the Snow Queen to Frozen) and it involved two sisters, Anna and Elsa, with Elsa becoming the evil Snow Queen but Anna ultimately redeeming her through the power of love. That still happens in the final film, but in the original story, the "frozen heart" that Elsa gives Anna (that Anna ultimately cures herself by an expression of true love for her sister) is not an accident like in the final film but a willful act by Elsa.

The original design for Elsa reflected her evil status. She had a sort of Amy Winehouse look to her. 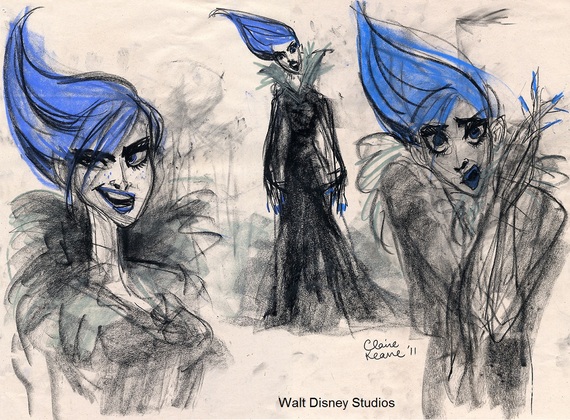 Interestingly enough, the casting of Kristen Bell and Idina Menzel as Anna and Elsa, respectively, happened well before there were any songs written for the film. The pair privately rehearsed "Wind Beneath My Wings" together to show their vocal chemistry at an early table read for the film. In fact, they had already begun recording their lines for the film under the plotline of Elsa being a villain. On the Frozen DVD, there's a cool piece of rough animation with Menzel acting out an early sequence when Elsa was still a villain.

The turning point for the film seems to have come when the songwriters for the film, Kristen Anderson-Lopez and Robert Lopez, wrote their first song for the film that actually made it into the final product (they had written a few earlier songs for the movie but they all got cut). Their assignment was to come up with a "badass" villain song for Elsa. Their end result was "Let it Go." However, the power ballad had a curious effect. First of all, the Lopezs felt a bit conflicted while writing the song, as they approached it from a slightly different perspective. They later described their approach as "thinking from an emo kind of place." Rather than being a straightforward villain, they saw Elsa as a conflicted person, who has always had to hide her snow powers and now was able to embrace them.

When the higher-ups heard the song, they were thrilled at the great song but they also saw how this new take on Elsa's personality would require them to alter the film. Jennifer Lee (who would ultimately be promoted to Co-Director of the film) told the New York Times, "The minute we heard the song the first time, I knew that I had to rewrite the whole movie." Initially it was just to introduce plot points to give the song support (like add in parts about Elsa being conflicted and reserved) but the more they did that, the more they realized that she no longer worked as a villain. 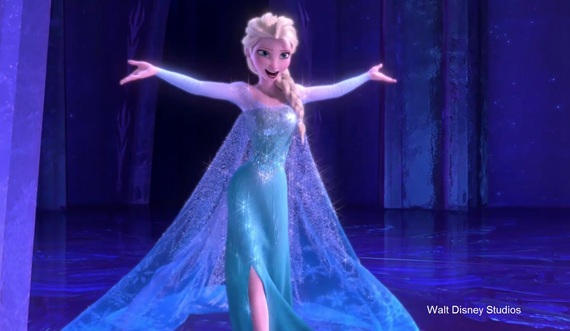 So in this new version of the film, Elsa was no longer an outright villain. She was now a conflicted young woman who accidentally injured her sister but is still redeemed in the end by her sister's love. Her visuals changed, as well, to look gentler and more like her sister. Another character to get caught up in this change was Olaf, the talking Snowman that Elsa creates during the film. When Elsa was a villain, Olaf was her henchman. Now that she was no longer a villain, Olaf becomes Anna's goofy sidekick. 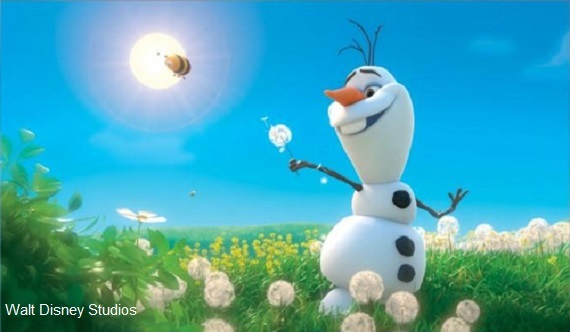 Moviegoers obviously went for these changes in a big way, as Frozen has become a massive success both commercially and critically ("Let it Go" went on to win the Academy Award for Best Achievement in Music Written for Motion Pictures, Original Song - yes, that is the full title for what we generally just call "Best Song" and Frozen won the Oscar for Best Animated Feature Film). Elsa and Anna are also apparently going to become the twelfth and thirteenth official members of Disney's roster of Princesses. And if it weren't for "Let it Go," who knows how it would have all gone down?

Be sure to check out my archive of Movie Legends Revealed for more urban legends about the world of films. And click here for more legends specifically about the wide world of Disney!

Ed Sheeran Has COVID, Will Do Performances From Home