One of the biggest decisions that filmmakers have to make when dealing with franchises is how to handle killing off characters. Do you kill off one of your main characters? And if so, which one? This debate was a major one for George Lucas when he began working on the final film of the original Star Wars trilogy of films and as it turns out, at least one character might have survived due to, of all things, the Star Wars line of toys. Read on to learn what went down in the great "Should Han Solo die in Return of the Jedi?" debate of 1982.

The first seeds of whether to kill off Han Solo or not came early in the production process for Return of the Jedi (then titled Revenge of the Jedi before Lucas changed the title late in 1982) based in part on the issue of whether Harrison Ford would even be in the film. Unlike the other main actors, Ford had not signed on to do two sequels, and since Raiders of the Lost Ark had made Ford an even bigger star than he already was, there was no assurance that they would even get Ford to sign on for a third film. So around this time, Lawrence Kasdan, who ended up co-writing the screenplay for the film with George Lucas, suggested that they pitch Ford on returning for this last film only for him to be killed off early in the film for maximum shock value. As you might recall from a previous edition of Movie Urban Legends Revealed, that's exactly the same approach that the filmmakers behind Star Trek II: The Wrath of Khan used to get Leonard Nimoy to agree to appear in that film (you can read about the various machinations of that decision here). Lucas did not like that idea and ultimately Ford signed on for the film without any assurances that his character would be killed off.

However, while Lucas was not on board with Ford being killed off early in the film, according to an interview Geoff Boucher did a few years back with Lucas' original co-producer on the film, Gary Kurtz (who had produced American Graffiti and the first two Star Wars films with Lucas), Han was still going to die in Lucas' original outline for the film. Kurtz noted:

We had an outline and George changed everything in it. Instead of bittersweet and poignant he wanted a euphoric ending with everybody happy. The original idea was that they would recover Han Solo in the early part of the story and that he would then die in the middle part of the film in a raid on an Imperial base. George then decided he didn't want any of the principals killed. By that time there were really big toy sales and that was a reason.

The original ending of the film was intended to be a bit more bittersweet, with Leia having to deal with being the new head of a tattered rebel force and Luke heading off on his own like The Man With No Name in Sergio Leone's famous Spaghetti Western films. 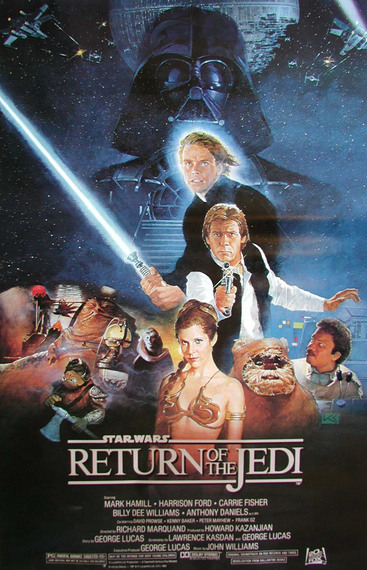 George Lucas famously worked out a deal with Star Wars where he would maintain the merchandising rights to the film, and as a result, he made billions of dollars with the toy line and other merchandising tie-ins. It would certainly be reasonable to believe that Han Solo dying in Return of the Jedi would dampen the sales a bit on Han Solo toys.

A few years back, in an interview on ABC during promotion for his then-new film Morning Glories, Harrison Ford spoke about Return of the Jedi and Han Solo, noting:

As a character he was not so interesting to me. I thought he should have died in the last one, just to give it some bottom. George didn't think there was any future in dead Han toys.

The question then comes down to whether we believe Kurtz and Ford that Lucas' motivations were based in merchandising rather than just a personal preference. I think that they are believable enough that I'm willing to go with the legend as...