Geckos are the superheroes of the lizard family. Equipped with sticky toe pads capable of supporting the weight of two humans, they cling to walls and scurry across ceilings with ease. But like any superhero, the reptiles have their kryptonite. A new study shows that soaked surfaces and wet feet cause them to lose their grip.

The key to the gecko's sticking success lies in tiny hairlike structures, called setae, found on the base of its toes. Each of these microscopic bristles can split into hundreds of nano-sized tips called septulae. Septulae create so-called van der Waals interactions between their molecules and the molecules of the surface that a lizard is clinging to. Such interactions are normally weak, but because there are millions of septulae on each of a gecko's toes, each tiny bristle adds a small grip, which together creates a secure hold. A million setae, which would fit neatly on a dime, could support the weight of a child.

Previous research had tested geckos' adhesive abilities on dry surfaces, such as smooth glass and rough walls, but they had not investigated how the reptiles react to wet surfaces, which are common in the rainforest environments in which many geckos live. So in the new study, researchers at the University of Akron in Ohio fit a group of Tokay geckos (Gekko gecko) with a tiny harness hooked up to a force sensor and placed the reptiles on dry, misted, and water covered glass surfaces. As the harness pulled back on the geckos, the sensor measured how much force it took to get the well-attached reptiles unstuck. The team found that as the surfaces became wetter, the geckos struggled to maintain their grip. 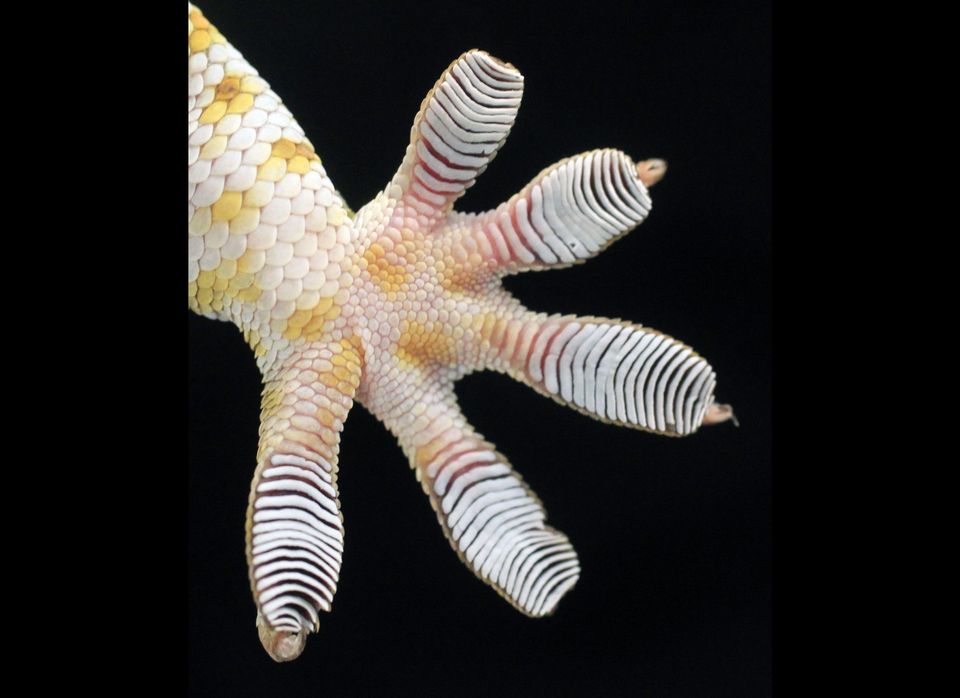 1 / 4
University of Akron Studies Gecko Stickyness
Detail photo of the foot of a gecko used for research at the Univeristy of Akron August 7, 2012. Geckos are well-known for the amazing stickyness of their feet, which allows them to climb vertically on many surfaces.
The Plain Dealer / Landov