So, we've got this guy in middle school now. And he is all sorts of cool. Savvy. Phrases like let's play have been replaced by let's hang out. He makes egg sandwiches for himself in the morning and wants to walk home from the bus stop alone in the afternoon. There is swagger in his neon-sneakered step.

I imagined we would sit our 10-year-old son, Joey, down when the time came and have the Sex Talk. But about six months ago I realized he knows way more than we think; juicy details and tidbits gleaned from the back of the school bus and movies and music. Every once in a while he'll ask something like, "So you and dad had sex five times?" And I will say, yes, just five.

I figured we'd sit our other son, Jack, down at some point and have a similar discussion, about him and autism. And I've been dreading this talk, the You Have Autism talk, much more than the Sex Talk.

Because sex -- although an awkward and uncomfortable subject -- ultimately leads to family and children. And if you have one too many French Martinis on date night it can even lead to a fifth baby who weighs 10 pounds. That happened to a friend of mine.

Discovering sex is like a flame gathering speed along a long fuse, eventually exploding in a brilliant spark of color and enlightenment.

But discovering you have autism? That's like saying, listen, I know we've been pretending all along that you're just like the rest of us, that it's perfectly normal to ask people when they will die and remember what year Hershey started making chocolate. But it's not. You're not. You are different, diagnosed, identified. You have something called Autism Spectrum Disorder.

For the most part, the You Have Autism Talk seemed to be following the same path as the Sex Talk. In the past year or so, Jack started picking up on little details here and there that make him different, things like speech therapy and a paraprofessional and stimming.

But instead of a spark igniting, I picture this discovery more like a balloon full and buoyant with air. Each new finding -- each new "Why do I have an aide and Rose doesn't?" -- is like the tiniest leak, until the brightly colored circle drifts to the floor, empty and weightless.

Last spring I had all the kids in the car and we were headed to the playground so they could run around while Joey played baseball. Eight-year-old Charlie suggested he could watch the kids if I needed to take Henry to the bathroom, but 6-year old Rose interrupted, "Why doesn't Jack watch us? He's older."

"Because," Charlie answered. "He has autism. He can't."

Hearing this, Jack promised, "I won't have my autism at the park. I will leave it in the car."

(It took everything I had not to look back and ask, oh, we can LEAVE IT BEHIND? All these years we've been lugging your autism around to all sorts of inconvenient places like the grocery store and church and doctors' offices and the library, where it screams and shouts and asks people about death? Huh.)

And then, all at once, the balloon deflated.

It was a Sunday morning in late September -- the day after my birthday. I was fuzzily turning pancakes on the griddle while Jack perched at the counter flicking the top to the syrup open and closed and open and closed. Out of nowhere, he asked, "Why was I born with autism?"

Quickly, my husband Joe and I shushed the other four kids, because we knew our time with Jack's open mind was short, that we had just a precious few moments before the steel trap in his brain snapped shut and moved on to how old Rosa Parks was when she died.

"Well, Jack, it's a part of you, just like your eyes are blue and you have big feet."

"Do all people with blue eyes have it?"

"No, it's not really about your eyes. It's like how you learn things."

And then, in rapid fire, these questions:

Standing before Jack in our kitchen I briefly wished we were having the Sex Talk instead. I longed for the concreteness of fallopian tubes and ovaries and this is how babies are made.

I mean, how do I tell my 9-year-old that I love his autism but I also hate it and it's beautiful but sometimes it's so very, very ugly.

How do I tell him there are days I literally want to pull my hair out by the handfuls and run into the street screaming, "Just measure the effing polygon so we can be done with homework!" How time and time again I am brought to my knees with frustration, with heartache, with fear.

Or the way anxiety -- a sneaky sidekick to his Autism Spectrum Disorder -- came in one February like a thief in the night, threatening to steal his joy, his happiness, the very smile on his face. And how the teeny-tiny white pill he swallows before bed keeps the thief at bay and the occasional giggle in his voice.

How his father and I are constantly sifting through the flood of information and advice about hyperbaric chambers and gluten-free pretzels and advanced behavior therapy; sifting and sorting to focus on the boy beneath the diagnosis.

And yet I can't imagine him without it, without the beauty and wonder and color it adds to our world and our family.

That Sunday night I knelt next to his bed, where he was sleeping with beloved Bunny on the pillow. In the quiet room, I started to whisper. I said something like this:

"Jack, your autism is great. It is not something to be embarrassed about or want to change about yourself. I love it. I mean, we all love it. It's so interesting the way you see the world. I can't wait to know more about it from you."


But we weren't done yet.

Two weeks later we were having dinner in our favorite restaurant. Our meals had just arrived, and in the midst of napkins and salsa and tipping cups, a robotic voice.

I just didn't even know what to say. Sitting in a booth at a Mexican restaurant and hearing Jack tell us he wants to get rid of something that is so fundamentally his, well, it broke my heart open wide.

As it turns out, we didn't have to say anything. His 10-year-old brother did it for us.

Joey turned to his younger brother, and with a mouthful of buffalo chicken burrito he'd ordered off the adult menu, he told him, "Jack. I think you're better with it."

"Yeah," Jack said thoughtfully, his own mouth full of corn dog. "Maybe." He glanced over at Joey, and behind the thick lenses of his glasses I glimpsed the smallest spark in his blue eyes.

That night, I knelt next to his bed once again and whispered to my sleeping boy:
"You are better with it."

I thought for a second more, and whispered:

"We are better with it."

I rose up from the side of the bed and turned to leave, and on my way out of the room I saw Joey's book about the human anatomy. And it occurred to me that one day soon we were going to have to follow up the You Have Autism Talk with the Sex Talk.

I think I'll leave that one up to Joe. 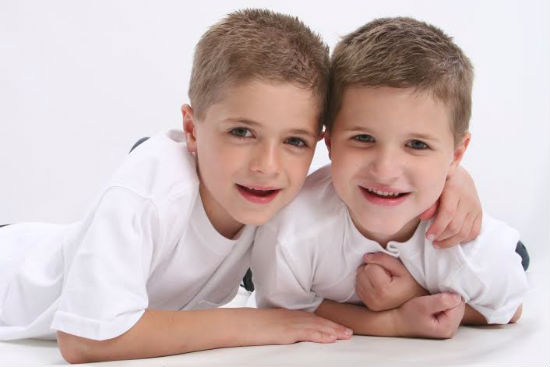