I have a problem that I'm embarrassed about, but I need help. I'm having trouble weaning my 2 year old. He just turned 2 and I thought he'd naturally give it up or I could just stop and he wouldn't really notice, but no, he seems more interested than ever in nursing. This is making me very tired and bedtime is a nightmare. (He co- sleeps, but I want to get him in his crib/toddler bed.)

How can I toughen up and go cold turkey and have him cry it out so I can get some sleep?

I know it might gross some people out that I still nurse. I don't think it's gross. I'm just really tired and want to sleep. 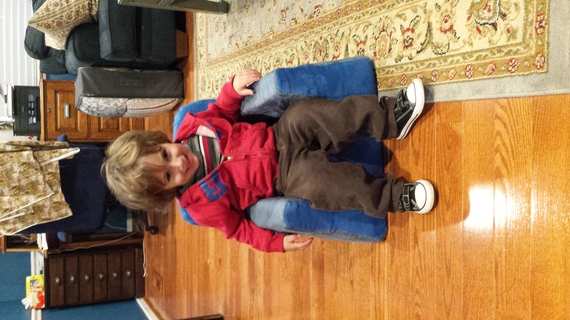 My toddler, pictured above, nursed until 17 months so I definitely don't think it's gross. Breastfeeding isn't gross. If your teenage son leans in for a quick nurse before heading out to the prom, it's a different story. Anyway, I was in the same boat as you. My son nursed almost every single time he saw me. No exaggeration, maybe 50 times a day when he was 17 months old. Whenever he would see me, even if he was playing and had seen me a minute before, he would nurse, sometimes just for a second. I couldn't even read him a book because he would twist around on my lap to nurse.

I decided that being unable to play with my child or read him a book at age 17 months was kind of weird, and also he wanted to nurse every single second in public as well. And I, like you, was getting tired. So I weaned him cold turkey. I just didn't nurse him anymore, I told him he was a big boy (he was at this point already eating steak), and he was upset for one day, kind of upset, the next day, and then within the week he stopped pulling at my shirt.

But since he was older when he weaned, unlike my girls (who weaned at 11 months and 6 months), he still remembers nursing even now when he is two and a half. We also had this weird phase after my milk went away where he would pull up my shirt and nurse for a couple of seconds when we cuddled in bed, and then he would laugh and pull down my shirt and say bye bye. I think this was what they call "closure." Then a couple of months ago, out of the blue, he said, "No nurse, I big boy." This coincided with him being a lot more independent/terrible two's, and I took his statement to mean that he would have probably naturally weaned himself around that age, about 8 months later than I weaned him. Then again, his statement could mean nothing because he's two.

One point to consider is that I stopped co-sleeping when he was 9 months but I weaned at 17 months, so there was a lot of time where we weren't co-sleeping but he was nursing. This is another option for you, to go cold turkey on co-sleeping (in my experience, any cold turkey things take about two days, whether it's removing paci, changing sleep arrangement, cry it out, whatever), but still nurse during the day. If you want to read about how to sleep train toddlers, I give you the lowdown here.

Advertisement
In general, I strongly advocate the use of bribery, I mean, "positive reinforcement" to make all of this easier. Here are some options:
For weaning, besides wearing a regular bra and a sweater and 20 layers so that he can't pull up your shirt anymore, kind of like how girls who don't want to have sex before marriage must dress on dates, do the following:
Feel free to decide that this all isn't worth it after three days and revert to nursing and co-sleeping. But give yourself the full three days. If he's still making your life hell after three days, you can go back, but if it's before that, then you're not giving it a chance to work. Kids are flexible. They survive things like monsoons and mothers who take 25 million pictures of them per day and demand that they smile for each one. That's not me it's "my friend." And despite what parenting books would have you believe,
your child will not be traumatized by most things.

Good luck, and till we meet again, I remain, The Blogapist Who Says, You Got Me, I Still Give Him Chocolate Milk Every Day.

This post was originally published here on Dr. Psych Mom. Follow Dr. Rodman on Dr. Psych Mom, Facebook, Instagram, Twitter, and Pinterest. Order her book, How to Talk to Your Kids about Your Divorce: Healthy, Effective Communication Techniques for Your Changing Family. This blog is not intended as diagnosis, assessment, or treatment, and should not replace consultation with your medical provider.

More:
Toddlersparenting adviceParenting Parentsweaning
Newsletter Sign Up
Raise the kind of person you'd like to know
Subscribe to our parenting newsletter.
Successfully Subscribed!
Realness delivered to your inbox