How do martial artists break concrete blocks?: originally appeared on Quora: The best answer to any question. Ask a question, get a great answer. Learn from experts and access insider knowledge. You can follow Quora on Twitter, Facebook, and Google+. 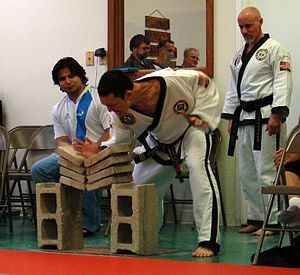 I've seen this before. It is really a simple trick when you understand the problem from a structural engineering perspective. The trick consists of a moderate amount of power and speed, and a lot of careful selection of the target material and geometry.

The blocks are typically un-reinforced concrete "soaps" or pavers with a thickness of about an inch, a width of 8" and a length of 16". The blocks are set to span the long way between two supports and are struck as close to dead center as possible. The blow from the martial artist creates bending stresses in the block. From material science we know that when subjected to bending stress, an un-reinforced concrete block of this thickness has very low strength. The observable behavior will be a tension crack that develops on the opposite side of the surface being struck. The crack quickly (instantaneously to the naked eye) propagates through the block and you are left with two pieces.

Crunching some quick numbers, I compute that it would, on average, take about 125-175lbs of static force to break one of these blocks in this manner. Without any other reference, this may sound like an impressive feet, but consider that this is typically less than the athlete's own weight; if they simply stepped onto the block it would potentially snap. Heavyweight boxers have been know to hit with as much as 1,000lbs of force, in a more difficult, horizontal direction, while martial artists often go so far as to employ a jump prior to striking the blocks. The biggest challenge for the average martial arts athlete to break a single concrete block is psychological, if they mentally commit and strike with a full force blow and have good follow through after impact, they'll easily break the block.

You'll notice that in cases, where a thicker concrete piece is broken, it is never one solid concrete block, it is always a stack of the same, thin blocks. Furthermore, if you look closely, you often see the martial artist place small pebbles ,seeds, or other spacers between the blocks. This allows the force to easily transfer as the blocks break progressively. For this reason, breaking multiple blocks only takes marginally more force than breaking one. They are breaking like a series of dominoes, not like a single, super thick block. Breaking an actual thick block would be much, much harder, and is rarely, if ever done. Add even a tiny amount of steel rebar reinforcing to the block and it will be utterly impossible to break by hand.

Something similar is done with board breaking. The boards are typically pine "1 by X" (actual thickness 3/4") material, about 12" square, and they are broken along the grain lines. The strength along the grain is only a tiny fraction of the strength across the grain. This is a result of the cellular structure of the wood. An analogy for wood grain is that it runs in long straw like tubes. Trying to break a board across the grain is like trying to chop through these straws,while breaking along the grain is just sliding your hand between the straws and separating the straws from each other. This is fairly easy to do as wood fibers are only bound with a fairly weak natural glue. Similar to bricks, breaking a single solid board is much more difficult than a series of boards with the same total thickness.

Occasionally you'll see someone break a thicker piece of wood, such as a 2x4 across the grain. This is a much more impressive feet, in this case you'll see that they generally do this with a much longer piece of wood, perhaps 3' or 4' in length. The longer span helps compensate for the thick material and cross grain breaking, but it is still generally apparent from the artists own exertion that this is a much more forceful and sometimes painful blow. Trying to break a knot free board that is even a little thicker, such as a 4x4, in this manner , will be virtually impossible.

So why don't concrete pavers break all the time when we walk on them? Simple, they are supported on a continuous bed of sand, so they only experience compression forces, which they are well equipped to handle.