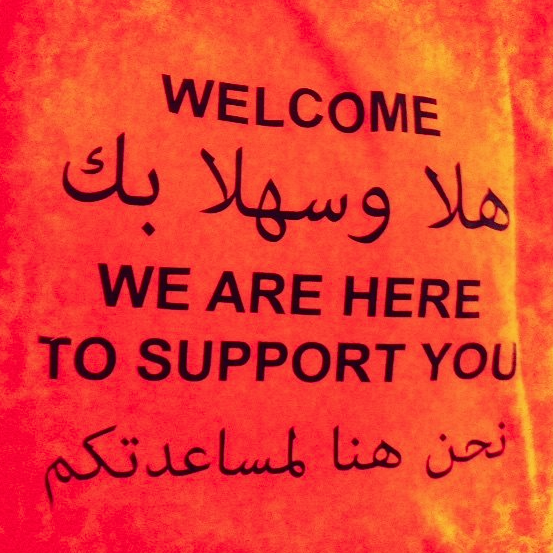 One Valentine's Day, my husband was scheduled to present a management training in our town of Zeist in the Netherlands. I knew the building Ron would be using: the Hotel Theater Figi. And I even knew the meeting room, on the second floor with big windows overlooking the street below. So I biked into the center of town, stood across the busy street, held up my handmade cardboard sign, and waited.

After twenty minutes, there was finally movement behind the blinds, and the training participants began to peer out. Eventually, there was Ron, bursting out the entrance doors, running across the street, grabbing me in his arms, and kissing me.

What was on the sign? "HAPPY VALENTINE'S DAY, MY GREAT LOVE!"

There were moments when I felt like a fool. Standing there for twenty minutes of gawking drivers! Why did I do it? Because I know it doesn't take much to inspire a person in a more beautiful direction. And it just seemed worth the effort to give Ron a moment he would never forget. 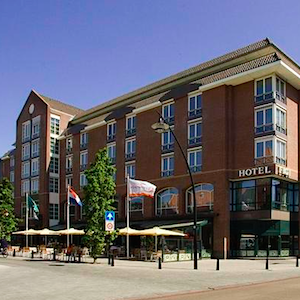 There is a common denominator that all seven billion of us humans seem to share. Some part of us wants to make a difference. We want it to matter that we're alive. And we all have a natural desire to love and be loved.

Jean Houston, Ph.D., who's an advisor to UNICEF on human development, said: "We all have the extraordinary coded within us, waiting to be released."

We're powerful, creative beings. And we have the potential to positively affect each other. We have a lot of love in us, and it's a precious thing. So people who receive our love are fortunate.

In my twenties, I worked in a school for children with special needs, most of them with multiple disabilities. There was a volunteer program for "foster grandparents" in place. Every morning, these elderly men and women showed up in the classrooms to help, by reading to the kids, or helping them eat, or just rocking them when they needed it.

They were retirement age, so they could've been traveling, playing golf or even at home watching TV. Instead, they were making a difference and reveling in each child's success, from the deaf-blind teen who learned to communicate his needs, to the mentally disabled 24-year-old who learned to use a toilet for the first time.

These fabulous people, wizened by life-experience, were energetic, dedicated and hilariously funny. And they were often still standing at the end of the day when we staff members had already collapsed on the lounge floor.

My Dutch stepdaughter just received her master's. She spent months in her student rooms writing her thesis on Europe's refugee crisis, comparing the decades-long policy of welcoming immigrants hospitably, with the current dilemma of "how much is too many."

At her graduation ceremony, she presented her case with charisma and conviction. She should use the video in her job search. She wants to work in the nonprofit sector and will begin pursuing an NGO position. She didn't feel satisfied, though, and was eager to get going to have a hands-on experience.

So she recently began volunteering with a group called Refugees Welcome Amsterdam. They spend six-hour shifts at Amsterdam's Central Station meeting the arriving trains. They're looking for the refugees, in a reverse type of profiling. The goal is to offer them a welcome smile, and a cup of tea, and a lead on a place to spend the night before they move on the next day. 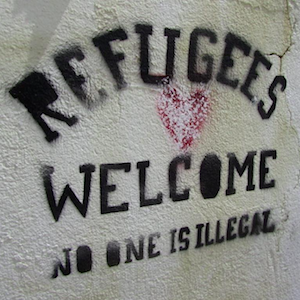 My stepdaughter sat at our dinner table and described her experience. She said that she was searching the faces, looking at the clothes and the baggage, or the lack of it. And she saw two men with a small boy getting off a train. She approached them and tried to communicate. Like most Dutch people, she speaks several languages, but she wasn't having success. So she called over a Syrian volunteer, and he spoke to them in their native language.

She described what happened next as "amazing." As we watched her tell the story, we would say it was "life-changing" -- for her. She said that a transformation came over the two men, which was humbling to witness. The Syrian volunteer offered the young boy a cup of juice. And the men's apprehension and fear -- a raw terror that most of us will never know -- fell away. And it was replaced by relief and peace, because they knew, at least in that moment, they were all safe.

We all have an inner drive that pushes us to be an uplifter, to be a creator of positive change. And opportunities are everywhere. Everyone we encounter would like to hear us say, "The world is nicer because you're here. You're wonderful, and I'm glad I know you."

When we support people by reveling in their success, we feel better.

So it's important, every now and then, to step outside what's familiar and comfortable, and to take an action that uplifts someone - to dig deep for our extraordinary and to release it.