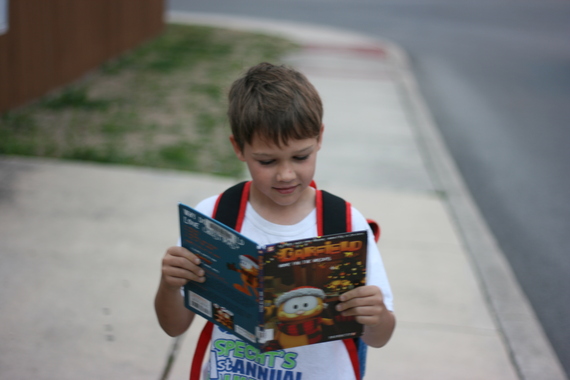 It's the last week of school, and I am a weeping mess.

Those heartstrings tied to them want to pull tighter, shelter them from the heartache I know is coming, because it always does. I want to protect them and hold them and keep them.

Mostly I want to keep them.

And yet this week has reminded me that keeping them is not something I can do.

Two days ago I watched my 8-year-old walk the stage for his second grade completion ceremony, where he got the "Artful Artist" award. Yesterday I watched my 6-year-old sing and sign and accept the "Best Reader" award during his kindergarten completion program.

Today I watched them both dance their way into summer.

Or I tried. It was hard to find a window between hands and arms and video cameras and smartphones where I could actually see them. I ducked and turned and moved, and everywhere I went there was another camera or phone recording the moment.

I had to squint and tilt my head just the right way to see my sons.

At first I felt angry. Annoyed. Because I was a parent, too, and I deserved to see my sons bust a move just like the next person did.

And then I remembered: It wasn't so long ago that I did the same.

Two years ago, when my first son was a kindergartener, I stood in the throng of parents and tried to take a video of him dancing. Because his daddy wasn't able to come and his daddy needed to see, but mostly because I wanted to keep the memory forever and ever and ever.

The whole time my Canon 7D kept slipping away from him because I was trying to just watch him, so the video isn't even a very good one.

I could not see that grin shine. I missed the way he made a goofy face at his brothers in the crowd and made them all burst out laughing, because I was so intent on getting just the right shot. I missed the way his feet fairly flew off the blacktop because he was so excited that he'd nailed the dance. I missed looking into his eyes and letting him see the pride that shouted from mine.

When my boy got home from school, he didn't even ask to see the video. He didn't care that there was one.

He only talked about when he had done that jump move and did I see him throw some break-dancing into the free form section? And I had to admit, at least to myself, that no, I hadn't seen it. Because I was too busy trying to capture video.

We miss something in these moments we work so hard to preserve.

It takes us a while to see it, because we are the first generation of parents growing up in a world of technology that puts access to video at our fingertips, without having to set up the perfect shot or figure out the best lighting or get as close as we possibly can. We have zoom lenses and auto-focus and cameras that can take five pictures per second.

And everything feels so necessary.

I know. I felt it this year.

I purposely decided, before each of the school events, that I would not pull out a video camera this year. But when the second graders walked across the stage for their completion certificates and awards and the principal announced that the center aisle of the cafeteria was reserved for parents taking video and pictures of their kids, I wanted to get up.

And when my son stood with his teacher and turned to the center aisle and no one was there, I felt like I had missed something. Like I had lost an opportunity.

But I just waved crazily from the back of the cafeteria and called his name and let that grin of his slide all the way down into the deepest places of my heart.

You see, our kids don't have to know that we are recording their every step and capturing their every accomplishment and putting it all into a folder they won't really care about when they're 18. They just need to know we're there. Watching. Enjoying. Marveling.

It's hard to watch and enjoy and marvel with a phone between us and every special moment. Sure, we may get to savor it later, but what are we missing right now, in this moment here?

There are some things pictures can't capture.

The excited glow of his eyes. The way that smile lights up the whole room. How he grins even wider, if possible, when he catches your eyes and not just the camera's eyes.

I understand how we can get caught up with every significant moment and just want to keep it. Keep them. I know what it's like to feel like you probably should order a class picture and those individual school shots, even though you take a billion better ones at home. I know how a yearbook in elementary school can feel necessary, because how will they remember if we don't find a way to preserve those memories?

The thing is, they don't really need our help remembering what's important.

Memories are so much more than seeing. They are hearing and feeling and smelling and tasting, too, and a video can only catch two of those. Our memories can catch them all.

I record so much of my kids' lives. When they do something funny. When they wear or say something cute. When they sing one of their original songs or choreograph that amazing dance or write a play and perform it for us in our living room.

I record because I want to remember. But could I remember without the help?

Because I want to be present in the moment. Right here. Right now. Looking at them with both my eyes open. I want my boys to know what it means to be fully present in a moment, to soak it up and let our memories do their work.

"Are you disappointed that we didn't get a video of your dance?" I ask my 8-year-old when he gets home from school today.

See? He knows the truth of it.

A mama can't dance when she's holding a camera.

More:
parenting adviceParenting parents-dadsParentsmodern parenting
Newsletter Sign Up
Raise the kind of person you'd like to know
Subscribe to our parenting newsletter.
Successfully Subscribed!
Realness delivered to your inbox