For some women, deciding not to have children is relatively simple, something they've known in their bones for as long as they can remember. For others, it's a decision reached later in life, either after a defining moment that snaps everything into focus or after carefully deliberating for years. And then there are those who wait for a clear answer that never comes.

We asked HuffPost Women's Facebook community about what it's really like to make the decision to be childfree. Here are 11 of their stories:

Getting pregnant made everything clear.
When I was 27, I got pregnant with a guy I was dating. I wasn't far along, but I could already feel my body changing. My gums were swollen and bled. My breasts were tender. The guy I was seeing said he would support whatever decision I made, and my mother and sister were just as supportive. It was entirely my decision. On the third day after taking the test, as I woke up to grab my Gatorade (which was the only thing I could stomach) it hit me: I don't want a child. I don't want the pregnancy experience. I don't even like to hold babies, much less give birth to one. Before I got pregnant, I would say I was 98 percent sure I didn't want kids. When people would ask me, I'd say no -- but always follow that up with "you never know, maybe one day." In that moment, however, it was like, no. Just, no. -- Callie, 33, South Carolina

I've just always known.
I've never wanted children, for as long as I can remember. If I played house with other kids, I was never the mom. I went to a very small Catholic grade school and I vividly remember an assignment for our confirmation classes that asked us where we saw ourselves in five to 10 years. Every girl in my class talked about how they wanted to be married with children, a white picket fence... the whole package. I was literally the only person that said I wanted to live in an apartment in Chicago with a dog. -- Katie, 28, Illinois

I realized I don't want to bring kids into a world like this.
I was always on the fence about having children, but then I started to volunteer as a sexual assault crisis counsellor in my mid-20s and that pretty much got rid of my ambivalence. As I worked with more and more women who were survivors of childhood sexual trauma, it became obvious to me that our justice system is not in their favor. They were courageous survivors, but most of them never saw justice as children and battled lives full of PTSD, fear, depression, addiction and anxiety. I quickly realized this is not the type of world I wanted to bring a child into -- it simply was not right for me.

I believe I would have come to the same decision if I hadn't had that experience; however, not as decisively as I did. What I witnessed as a sexual assault crisis counsellor was not something I could shake -- especially when I thought about bringing my own child into this world. Until we care more about the well being of our children in general, I won't be in a hurry to have any myself. -- Sara, 28, Canada

For no particular reason, I suddenly had my answer.
I've known for as long as I can remember that I never wanted kids and I never even thought twice about it until my late 20s. At that point, I went through some real angst over it, wondering how I could look at a baby and feel nothing inside, and trying to talk myself into having a kid or two. A lot of my friends were having kids, and my mom was asking about it. It was almost a daily thing -- I'd just be spinning the wheels in my head.

One day something inside of me snapped and I told myself that I was making the decision then and there. I said, there are no new facts to consider. You're not suddenly going to get some new information that makes this easier, so just go with your gut. In that moment, I knew the answer was I didn't want kid -- and then I instantly felt so relieved. I haven't looked back since. (I have a lot of weird epiphanies, like, I can tell you the exact moment I began liking bell peppers.) I don't know what it was about that particular moment; it was just... time. It's like being at a restaurant and not being able to chose between a salad and a burger. At some point when the waitress comes, you just have to order. -- A, 33, Texas (for privacy reasons, only first initial has been used)

I finally saw a model for what a childfree life looks like.
I've never had an interest in children, but it was in college that I decided that I would be childfree. I had a few female professors who did not have kids and who led perfectly fulfilling lives, with books and pets. I spoke to one of my professors about it, and I follow her on Facebook, so I get a lot of updates about her life. I never had a model for it before then, as my entire family is "traditional" -- you get married, have kids, that kind of thing. I had never considered the childfree life a "complete" life, having grown up with that, but I knew it was the life I wanted to have. It's taken a lot of work to accept that it's not selfish to want what I want. -- Jessica, 25, South Carolina

I still have some fears (and that's natural)
I've never wanted kids, I just feel like I don't have the "mother gene." The only real regret I have is that I know how badly my own mother wanted grandchildren, and that I never gave her any -- she has stage IV colon cancer, so that definitely makes the regret run a little deeper.

But I don't think these fears or regrets need to be eased, and they don't run my life. They are more fleeting thoughts, which I believe are normal -- natural. There was no defining moment for me, no a-ha. To this day, kids and babies just make me very uncomfortable. I don't relate to them. -- Niki, 38, Chicago

I'm 39 and still unsure.
I'm 39 and always thought in the back of my mind I might have kids someday, but now I'm ambivalent about it. I have a good job, a house, I travel several times a year and have a lot of freedom. So if kids were to happen now, fine. If not, that'd be fine, too.

I'm surprised by my ambivalence. I always said 35 was my cutoff to have a baby... and then 35 came and went. I was briefly married in my early 20s and figured it would just happen eventually, but then the marriage ended before it even became a topic of conversation. If I met a man I felt would truly make a good father and life partner, I would consider it, though at 39, I am not sure it's even a reasonable expectation that it would occur naturally. It's also definitely not a priority in my life. -- Kristen, 39, Florida

Spending a lot of time around kids gave me my answer.
When I was a child, I thought I would get married and have four kids. Then I became a teacher and realized that I really like children, but I don't really like them after 4 p.m., Monday through Friday. It was a sudden realization. I would think to myself, "How could I go home and deal with more kids, even if they were my own?"

I have a niece and a nephew who I helped take care of when they were babies, which was a pleasure, but when their mother or father came to get them, I was elated. I realized that I just don't have that thing, that factor, to be the type of mother I'd want to be -- the kind that gets on the ground and plays, is patient when they're moody. I just... don't. I hear all the time, "You're so good with kids!" People just assume that if you're a nurturing person, you should automatically have children, but I don't have that desire. -- Andi, 33, Texas

I don't want to go off my medication.
I have always loved children -- I love being around them, listening to the things they have to say. How they perceive the world is magical to me. When I was younger, I thought that I would have lots of babies, but now at 25 I have a feeling in my very core that I'm not meant to. I have been taking Paxil, the anti-anxiety medication, since I was 12, and it has been linked to birth defects. I've tried to get off the medication, but every withdrawal has been filled with cold sweats, vomiting, dizziness, chronic fatigue and weight loss. The thought of going through nine months of withdrawal while pregnant is something that terrifies me. The stress it would put on the baby and myself wouldn't make for a healthy pregnancy. I know that I will probably never be able to carry a child. Call it instinct. -- Samantha, 25, Florida

I feel ill just thinking about pregnancy, but I worry about regret.
I'd always planned that I'd get married and then have kids by the time I was 30. I was engaged at 21, but realized I didn't want to spend the rest of my life with my husband. Then I was in a relationship with a guy for seven years who was a terrible father to his kids already, and I left him. Since then, I've traveled. I volunteered in Africa for two years.

I'm 36 and I really don't know if I want kids or not -- I've cried over the fact that I may well now be too late (I'm not sure I have enough time to find someone and bring kids into the world with him) and at the same time, I'm not sure that I actually want to go through pregnancy at all. I love the freedom I have, and the fact I have a well-paid job with plenty of time to travel; however, I'm scared from everybody's hype that one day I'll wake up and regret not having kids.

When I got my tubes tied, I finally felt '"childfree."
I remember telling my mother when I was about 5 years old that I never intended to have children. Of course, she brushed me off and gave me the usual, "Oh, you're young. You will change your mind." As I grew older I wavered -- not because I was unsure, but because of the pressures of society. But when I was 25, I decided to be loud and proud about my childfree status -- that was the year that I became pregnant while on birth control. My boyfriend and I were terrified at the thought of being parents. We decided that if my pregnancy was viable, we would go through with an abortion. Lucky for us, it turned out to be ectopic so no other action was needed on our part.

I don't think I needed the pregnancy to make things clear for me about where I stood, but I do think I needed it to make things clear to others. After the ectopic pregnancy, I decided to actively pursue getting a tubal ligation. It was performed in April, 2014 and that was the first moment that I truly felt childfree and in control of my reproductive health. -- Ulonda, 27, Ohio

These accounts have been edited and condensed for clarity. 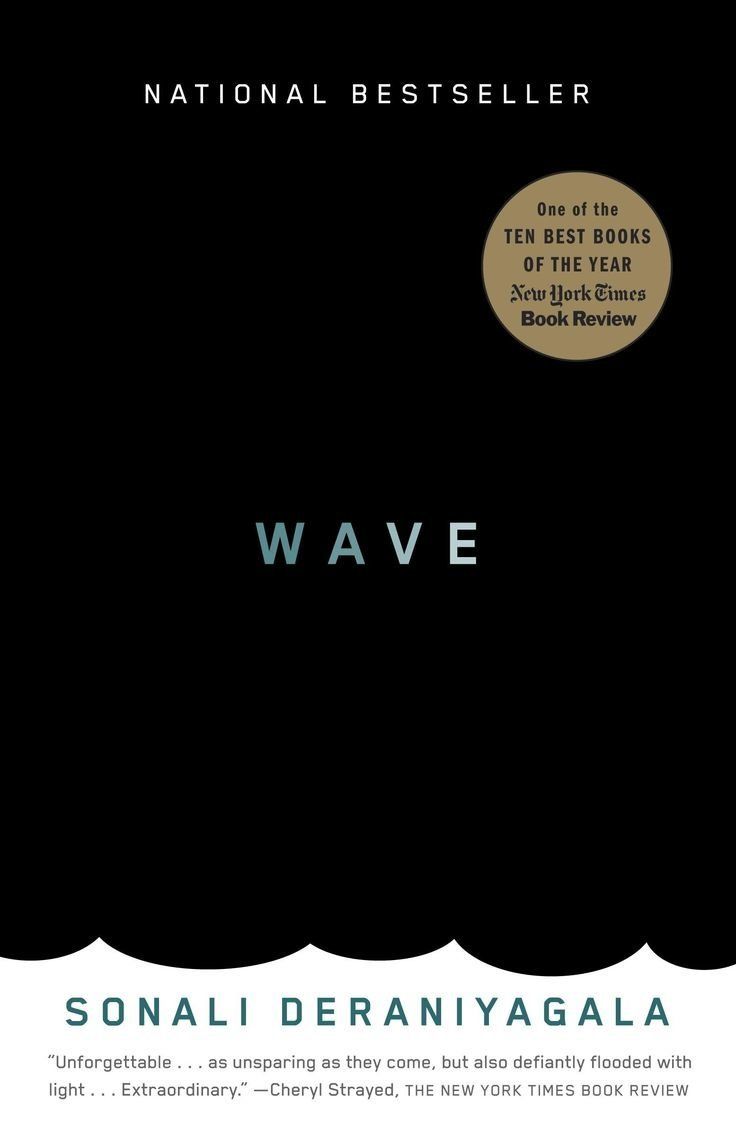 1 / 17
"Wave" by Sonali Deraniyagala
"Deraniyagala's memoir about losing her husband and sons in the 2004 Boxing Day tsunami is... possibly one of the most moving books ever written about grief." -- <a href="http://www.theguardian.com/books/2013/apr/03/wave-sonali-deraniyagala-review" target="_blank">The Guardian</a>
Amazon