Don't worry if this is news to you. It was news to some of us here at HuffPost Taste no more than a week ago.

The vegetable pronounced "N-Dive" is a leafy, curly green that is a member of the daisy family. It is closely related to chicory, radicchio and Belgian endive.

The rocket-shaped vegetable we call endive is actually pronounced "On-Deeve." It's a Belgian endive and guess what? It doesn't grow in nature, but actually requires a very labor-intensive, unnatural cultivation process. 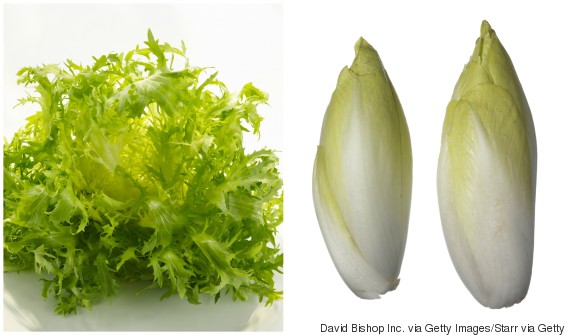 Maybe you've known the difference and have been pronouncing these vegetables correctly all along, but we sure haven't. Now we know, and so do you.

We can thank Lucky Peach for bringing this distinction to light in an awesome profile of endive (the torpedo-shaped kind) farmer Rich Collins. In a compelling story that makes the long, slow process of growing these unnatural vegetables sound thrilling, writer Rachel Khong explains why Belgian endives are so precious.

The Belgian endive is "so special it's grown twice." It comes from the root of a chicory plant that has been cut and forced to grow a second time. Collins lets chicory plants grow for about four months. Then he mows the curly tops off the plants and places the long roots in a cold, dark room. The roots will rest there for anywhere from one to 10 months. When Collins is ready to make the roots grow again, he places them into trays of water in a warmer room. This is essentially tricking them into thinking they've transitioned from winter to spring. He calls this the “forcing room" because he's basically forcing a bud to grow out of the root again. That bud becomes the crisp, slightly bitter and very refreshing Belgian endive we know and love -- a vegetable markedly different from the one that shares its name.

That's a lot of work for such a dainty food. We'd say Belgian endives have earned the right to be pronounced correctly.