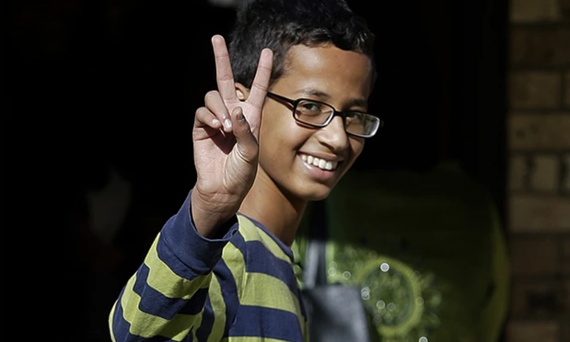 Whatever you think of Bill Maher's political philosophy, you've got to give him props. He is probably the most high-profile self-professed Liberal to openly grapple again and again with one of the most vexing ironies that modern political progressives must confront: the liberal tolerance of the religious extremism that threatens the very foundations of the liberal tolerance that allows religious extremism to flourish. It's definitely a little meta, and sometimes even Maher loses the plot.

Last week, when Maher responded to the arrest of Texas teenager Ahmed Mohamed like a true Islamophobe, was one of those times. In comments on HBO's Real Time, Maher suggested the authorities' actions in the case weren't exactly unjustified. "For the last 30 years," he said, "it's been one culture that has been been blowing s--t up over and over again." (Here he meant Islam, not America, go figure.)

Maher's comments were all the more baffling, as a question in Ahmed Mohamed's case was how to connect the teen's actions or motives with Islam at all. Fellow outspoken atheist Richard Dawkins did it through shameless, baseless insinuation: Mohamed must have had ulterior motives. After all, he's one of those dark-skinned, foreignish, Muslimmy types. Maher's approach more resembled typical blame-the-victim tactics: If dark-skinned, foreignish, Muslimmy types don't want to be arrested, they should not bring things that could be mistaken for bombs to school, or show them off to someone lighter-skinned and less Muslimmy, who could reasonably mistake them for bombs, since dark-skinned, foreignish, Muslimmy types are known to blow things up. There's no getting around it: this is pretty much straight-up, dictionary definition racism and Islamophobia in a nutshell.

Now, I think it's important to have informed, irreverent voices of criticism like Maher's in our public discourse. (Although somebody needs to stick a fork in Dawkins -- he's done!) Like Maher I'm alarmed at the rise of religious extremism across the globe (although Islam doesn't have that market cornered -- not by a long shot). As a humanist and a progressive, myself, I'm critical of any religion which in doctrine or practice places false barriers to human actualization; sets up hierarchies based on gender, sexuality, ethnicity or race; tacitly or explicitly advocates coercion, bullying, sexual or physical violence, or discourages or forbids inquiry, education, and personal evolution. I believe the combination of science and liberal arts can foster a sustainable open society with a culture of opportunity for all. And I'll admit that religious fundamentalism, at a time when science and humanism provide such real hope for humanity, scares me.

I'm not the only one, of course. Fear of religious extremism is on the rise everywhere. But, according to a recent Pew study, liberals are far less likely to focus on Islamic extremism than conservatives are. Maher, in his reaction to the Charlie Hebdo massacre last year, took his audience to task for this, echoing conservative critics who observe that American liberals get all up in arms at, say, Kentucky County Clerk Kim Davis's religious objection to gay marriage, but shrug when ISIS throws gays off of buildings to their deaths in Mosul. The truth of this is debatable, but the observation is meant to insinuate an anti-Christian bias on the part of liberals, many of whom consider themselves, ironically enough, Christian. What conservatives may be reacting to, in reality, is resistance on the part of liberals and progressives, Christian or otherwise, to engage in Islamophobia, which, in America at least, lives at the nexus of racism and religion.

Ahmed Mohamed is a clear case-in-point. There has been no evidence, and no claims by authorities that Mohamed's religious beliefs or practices influenced his actions, which were, themselves, at worst, benign. Even his background is benign. His family is Sufi, which is among the most liberal, humanist forms of Islam, although by no means apolitical. Journalists digging for dirt on his folks came up empty-handed. The Mohameds are model immigrants. The most radical thing about Ahmed's father is his passionate concern with finding a path to Peace in his native Sudan. The story here was clearly not about Islam or Islamist extremism imported from abroad, it was about Islamophobia running rampant in Irving, Texas. And, unfortunately, on HBO's Real Time, too.

Despite what Maher says, liberals and progressives, even atheists, are right to err on the side of Islam. Islamophobia has less to do with Islam than with a long, rich tradition of othering perpetrated by parties who stand to gain from fearmongering. Recognizing this has implications for all sides. It means we have to look deeper at who's doing the fearmongering and what they stand to gain from it. But we should also look at those who claim legitimate criticism of religious doctrine or practice is merely fearmongering, and ask what it is they want, too. In all of this, we need to somehow maintain an open mind and an attitude of respect for those simply practicing their heritage.

This process is fundamental to the progressive agenda, and it asks a lot of us. It asks that rather than reject the place of religion in people's lives, we view religion in modernity through a lens of intersectionality, as part of our history and cultural inheritance, along with many other equally vital aspects of identity. This is, admittedly, a secular view, but even religious fundamentalists, with all their cherry-picking, can't help but tacitly acknowledge that we live in a complex world in which much of their doctrine and dogma is antiquated and inapplicable, even for them. Kim Davis would have been stoned to death three divorces ago if her version of religion were the law of the land. Extremists clearly recognize that secular law is designed to protect their rights, too, even as they argue against equal rights for others.

I'll admit that in a sense, Bill Maher is right, though: the real battle of modern progressivism today is how to talk about and what to do about these pockets of fundamentalism, intolerance, and religious violence which our progressive belief in speech, tolerance and diversity actually gives freedom to grow. Fundamentalists often respond to this peculiarly liberal conundrum with relish: "if your belief system is so tolerant why can't you tolerate my intolerance?" Well, first of all, we obviously do, if Kim Davis is any indication. It's a child's taunt, of course, and it unwittingly shows the real danger of allowing ignorance to abide in these communities. But it remains a conundrum for us: how do we confront the complexities of, say, a coercive patriarchy that has women thoroughly convinced they are exercising freedom perpetuating their own oppression, in a way that honors the self-determination of women to choose their beliefs and practices?

Well, one way is to speak of and to the individual, not their religion, honoring the complexity of individual experience, which both fear of religion and religious dogma seek to crush.

But back to Bill Maher. In a national election season where the media and at least one major party traffic almost exclusively in fear, Maher is making some strange bedfellows. Of course, Maher is notoriously touchy about free speech, especially his own, and his Islamophobia serves double-duty: he gets to take on religious and political correctness in one snarky swoop. What comic can resist a twofer like that? Maher is a true liberal on free speech, that's for sure, and should be afforded every opportunity to make use of it, even if only to make an ass of himself. And, yeah, this time the joke flopped. If liberals are hesitant to celebrate the arrest of a fourteen year-old science geek for showing off his "invention" at school, we're actually on the right side of the Enlightenment.

Maher in this case is not. What he and his strange bedfellows are promoting is way more dangerous to democracy than Islam could ever be. Religious extremism will not destroy America. But it's not fear of religion that will ultimately defeat religious extremism, either. It's a robust culture of opportunity guaranteed by secular laws that apply equally to all -- the idea, however rocky the road in practice, that's always been the answer. Or let me put it another way: How do you solve a problem like Bill Maher? Ahmed Mohamed. Applied liberally.