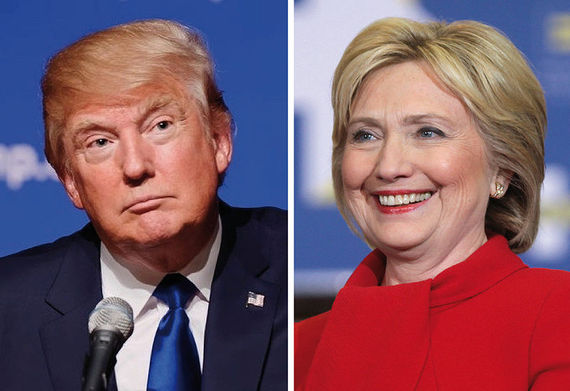 Admittedly, my title doesn't have the ring to it like "How Do You Solve a Problem like Maria?" from The Sound of Music does, but when you pit the two predicaments against each other, our present national political quandary seems more pressing. On one side, you have a whimsical and unpredictable Catholic postulant disrupting the equilibrium of an Austrian abbey. On the other, many American voters feel they have a veritable Sophie's or King Solomon's choice at the ballot box this November.

Or Hilary Clinton, the establishment politician whose blunders as Secretary of State and detached demeanor have even some staunch Democrats wanting for more charisma?

When the Trump Train started hurtling down the rusty tracks toward the GOP nomination and it appeared unavoidable he would seal the nomination, I believed what many others believed: there's no way people are going to vote for this guy. But, as Republican senators and former GOP potential candidates have pulled U-turns and changed their rhetoric from "This guy would destroy our party and country" to "Okay, let's get behind him because he's one of us", more and more American voters -- including ones I thought would never vote for Donald Trump on principle -- are changing their minds.

They can't decide who would do less damage to our country.

That's the context of the discourse for many moderate Republicans and Democrats -- many of them Christians -- as they try to make a choice about who they're going to vote for come November. The debate isn't about which candidate is more qualified or who best represents their beliefs, values and hopes: it's a deliberation over a perceived lesser of two evils, a conversation about marking the bubble on the ballot that will result in the least amount of harm over the next four years of a presidency.

I'm not here to comment on the general condition of American politics or to opine about the lack of contemporary "statesmen" and subsequent rise of wealthy, self-interested politicians in elected office. That's a real problem, but a systemic one not likely to be fixed in a single election cycle.

This present issue involves voters who feel morally and spiritually unable to cast a ballot for Trump or Clinton based on conscience and principle. I know it's difficult in our national ecology of partisanship and divisiveness to comprehend, but voters who find both Donald Trump and Hillary Clinton nearly equally unelectable based on past decisions, qualifications, and (lack of) character actually exist.

My fear is those voters stuck between a Donald and a Hillary will painfully induce themselves into voting for one or the other even though everything within their soul/conscious/brain screams, "No! I don't think either of these two will make a good president!"

I can see people making this choice based on tradition and conventional wisdom:

You have to vote.

And yes, voting is a right and it's a duty. It's also a vital part of what makes America a democracy (for better or for worse) and has accommodated Americans with many of the freedoms they enjoy.

But when personal conviction clashes with conceptual notions of custom and obligation, integrity supersedes an compulsion to tradition.

Citizens belonging to a country have a responsibility to be good stewards with the authority they have in civic engagement: this includes the power of individual suffrage. But if that vote cannot be cast in good conscience, it shouldn't be conferred to a candidate at all. Candidates -- especially for President of these United States of America -- should merit and earn our votes, not receive them because they are maybe-not-as-bad as the alternative.

If you're in the camp I described -- a place of total disillusionment and disgust; a crisis of conscience -- approaching the 2016 election, I encourage you to try something other than settling for the lesser of two evils and swallowing a bitter pill come November.

If you can't vote for a candidate in good faith and conscience, choose something other than what you see as a rotten option at your polling place: your dignity.