How does John Boehner get re-elected? Ask his big-nosed friend, Gerry.

The Speaker of the House of Representatives, third in line to the White House, is elected by a very non-representative suburban, rural and overwhelmingly white Ohio congressional district carved out to insure his safe re-election.

Boehner's 8th Congressional District in Ohio is so wildly gerrymandered that it avoids the three largest cities on his side of the state, and looks like a big-nosed person: 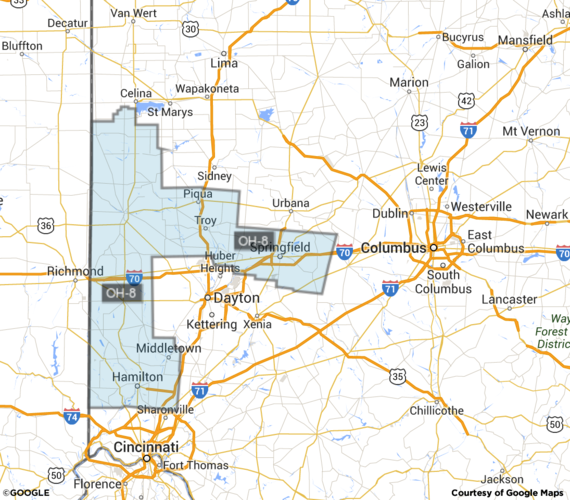 What does Boehner gain by avoiding Columbus, Dayton, and Cincinnati? According to U.S. census data:

In the redistricting of 2010, after the last census, to protect the local GOP base in Springfield, East Dayton was dropped and Gerry's nose grew a bit.

In 2012, President Barack Obama carried the three counties in which those three cities with large minority populations are situated. In Franklin County, where Columbus is located, Obama beat Romney by almost 22 percent.

Boehner was unopposed in the Ohio 8th in 2012. Other than a handful of write-ins for James Condit, he won by a whopping 99.2 percent.

Boehner's campaign war chest for 2012? Just over $22 million. There were 724,285 people living in the district in 2012. 248,312 people, roughly 34 percent of the population turned out. While it might seem hypocritical for the Speaker to talk about sound finance when his campaign spent $88.50 for every vote in a district where he was running unopposed, consider that it serves as a large political scarecrow to keep Democrats from even trying to change the political winds blowing across that part of Ohio.

Where would Boehner be without Gerry?

Add in any of the three largest cities around him, and level the voter demographics out to a more representative cross section of Ohio voters, and it is highly unlikely that Boehner would have survived the 2012 election cycle.

Both parties gerrymander, except in states like California that have set up politically neutral commissions which eliminate the games played. That the third most powerful man in American politics can be elected by roughly a third of his constituents, where the district has been gerrymandered to disproportionately stack itself against minorities, should be something that Justice Department should investigate under Voting Rights laws.

Then again, the SCOTUS, equally stacked to favor the white and wealthy, would probably turn a blind eye to it all.