How do prayer and meditation affect brain activity? Dr. Andrew Newberg, MD, is the Director of Research at the Myrna Brind Center for Integrative Medicine at Thomson Jefferson University Hospital and Medical College, and he has studied the neuroscientific effect of religious and spiritual experiences for decades.

In a video that recently aired on "Through the Wormhole" narrated by Morgan Freeman on the TV channel Science, Dr. Newberg explains that to study the effect of meditation and prayer on the brain, he injects his subjects with a harmless radioactive dye while they are deep in prayer / meditation. The dye migrates to the parts of the brain where the blood flow is the strongest, i.e,. to the most active part of the brain.

The image below compares brain activity at rest and while the subject (a Presbyterian minister is shown in the video) is in deep prayer. 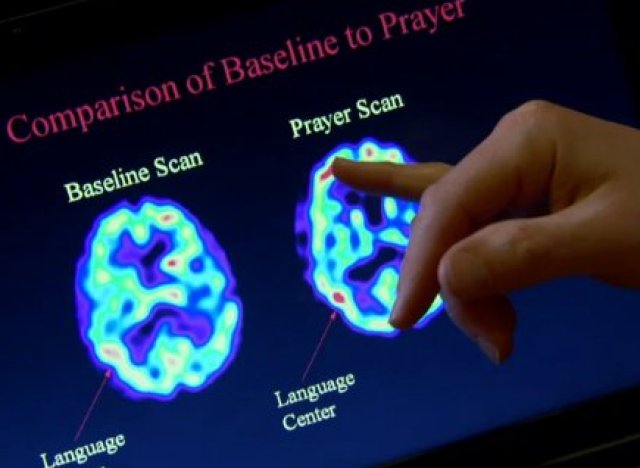 The red part indicates greater activity, and in this case, increased activity is observed in the frontal lobes and the language area of the brain. This is the part of the brain that activates during conversation, and Dr. Newberg believes that for the brain, praying to God in the Judeo-Christian tradition is similar to talking to people. "When we study Buddhist meditation where they are visualizing something, we might expect to see a change or increased activity in the visual part of the brain," Dr. Newberg said.

While observing atheists meditating or "contemplating God," Dr. Newberg did not observe any of the brain activity in the frontal lobe that he observed in religious people. The image below compares brain activity at rest and while the subject is in deep meditation. 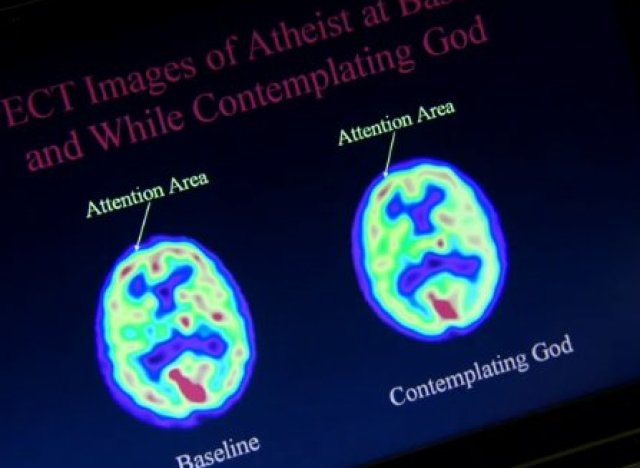 Dr. Newberg concludes that all religions create neurological experiences, and while God is unimaginable for atheists, for religious people, God is as real as the physical world. "So it helps us to understand that at least when they [religious people] are describing it to us, they are really having this kind of experience... This experience is at least neurologically real."

Check Out This Slideshow Of Some Of America's Most Iconic Prayers

religionreligion-sciencegps-mindfulness-researchPrayer and Meditation
Go To Homepage