For all the derision that Donald Trump dodges, one has to wonder if indeed he's dumb, but more like a fox. What appears lately to be a staple in The Donald's arsenal is a savvy move of chess masters: The Zugswang.

Zugzwanghttp://www.chess.com/chessopedia/view/zugzwang [ˈtsuːktsvaŋ]. A player is said to be "in zugzwang" when any possible move will worsen his position. German word meaning "obligation to move."

Such was Jeb Bush's pickle this week when arch rival Donald Trump observed in his signature just-sayin-style that 911 was the responsibility of George W. Bush.

Playmaker geeks might debate that Trump's principle play was a screen (he invoked the paired image of W and 911), a ping (he hinted that 911 was W's fault) or a call out (an unvarnished chiding of the Bush II presidency). In fact, the play was a veiled bait of Jeb. 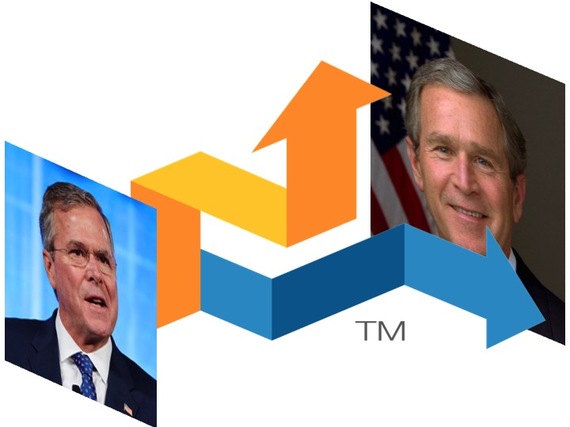 Trump's musings were perfect pickings for media who predictably demanded to know -- and particularly of Jeb -- if W was to blame for 911 and if Jeb would rise to his brother's defense.

Jeb should have deflected, saying simply, Ask my brother. But he rose instead to defend his family's honor and, as a consequence, glued himself again to his single worst liability -- George W. Bush and the hard-to-sell legacy of the 43rd presidency.

You can talk about the hair. You can shrink at his hatred. You can marvel at his immodesty. But this carnival barker, Mr. Trump, knows his target and the moves to demolish him.

Graphic courtesy of Playmaker Systems, LLC, with content from Wikipedia