Doug Hughes does not have a Super PAC.

A Super PAC, created in the wake of the 2010 Supreme Court decision Citizens United vs. FEC, is a campaign expenditure entity that has no limits to how much money it can spend in an election or how much one donor can contribute to it, but it cannot give money to a candidate, and it cannot coordinate with their campaign. Granted, that term "coordinate" is pretty loosey-goosey these days, as Jeb Bush's SuperPAC has largely supplanted his campaign for president, which he hasn't even bothered to declare yet, since that would require following "rules" by the Federal Elections Commission, which even the FEC Chair says can't be enforced anyway.

Doug Hughes has not been a major campaign contributor.

Indeed, according to FEC records, Doug Hughes has basically failed to exercise his free speech in the form of giving money to politicians. In fact, all the other Doug Hughes-es put together pooled a paltry $20,000 in political contributions, far short of the amount of speech that only one (1) Shaun McCutcheon has to spend, who had so much to say that the Supreme Court saw fit to rewrite the laws again in 2014 so that the Alabama coal executive could spend millions in contributions to candidates.

A U.S. Postal Service worker, Doug Hughes has been a public servant, and in his time has seen campaign mailers proliferate, while voter registration cards dwindle. He's seen his invaluable agency attacked by lobbyists looking to sell off the Post Office to private interests. As a government employee, Doug Hughes might well have felt entitled to share his thoughts with other government employees, specifically elected officials in Washington, D.C. After all, the Constitution makes it very clear that Congress works for the American people.

Ah, but here's the rub. Doug Hughes wanted to share his views with Congress about issues affecting the country as a whole. But, if you've been reading closely, you already know that Doug Hughes does not have a Super PAC, nor is Doug Hughes a major donor, nor is any other Doug Hughes that he could even hope to be confused with. On a government employee salary, Doug Hughes did not have a media conglomerate or fossil fuel factory of his own, for whatever reasons.

Yet, Doug Hughes wanted to address this very dilemma: That because elected officials focus all of their efforts on raising vast amounts of money for re-election, and because corporations have come to write their own legislation, our country needs new campaign laws and a constitutional amendment to reclaim our democratic process from the highest bidder. Members of Congress could either accept this and reform the system, or deny it and fight reform.

As it turns out, a number of people have been up in arms about pretty much the same things. From op-eds, to books, to protests, to teach-ins, to occupations, to ballot initiatives, to movies, to a movement for a constitutional amendment, Americans across the political spectrum are demanding reform of our campaign finance system. But when over 50 percent of Congress are millionaires, they can be oblivious, like refusing to raise the long-outdated minimum wage while wanting to raise their own salary.

Doug Hughes did not have a Super PAC. He did not have the clout of a major donor. But he did have a gyrocopter.

As a candidate for office, you have to raise hundreds of thousands of dollars just to get your message out. It's already hard on candidates, but if you are a citizen trying to get a message out? What, are you going to rent your own billboards, or get your own airtime?

Doug Hughes knew something about getting airtime. Not the media buys that have become so pivotal early on in campaigns -- actual airtime, like a hang glider with a propeller, at a tenth of the cost of a helicopter.

After a couple years of stewing on the idea and amassing gumption, Doug Hughes followed through on his own personal dare: becoming the mailman for Congress, delivering his own letters to each individual member of Congress urging immediate action on our pay-to-play system of politics. Doug Hughes chose Air Mail, bringing his letters from Florida, and delivering them personally to Capitol Hill, by way of a one-man air mission, which was covered nationally as breaking news.

Because let's face it: would a non-wealthy person get attention from the media or Congressional staffers without making an arrival that would undoubtedly get their attention?

As Doug Hughes faces charges that could put him in jail for four years, the most serious of which is operating an aircraft without a pilot's license, his case must be tried for the larger issue of free speech that is at stake. The flight of Doug Hughes was a form of nonviolent direct action aimed at raising awareness about the urgency of campaign finance reform. Because none of our most pressing needs will be faced until we get the corrupting influence out of the way. So vital was getting this message out, Doug Hughes risked his life to share it with his country.

And as long as the Supreme Court interprets "free speech" to include spending untold fortunes in elections, it seems fair to also define free speech as a peaceful protest on public grounds, or even public airspace. Because just as Supreme Court justices have long interpreted the First Amendment to say that in elections, you can't really say much without spending money, the flip side is presented here -- since you can't really say much without money, you have to speak out in different ways, such as a very public demonstration.

The question should not be, how could Doug Hughes pull such an ambitious stunt just to make a statement? We need to ask ourselves the much bigger question: what other recourse did he have? 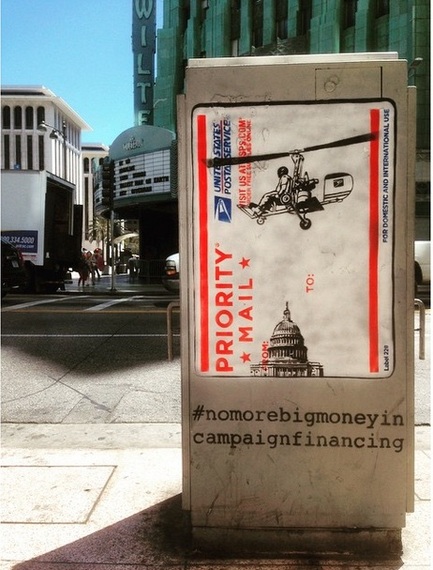 John Wellington Ennis's documentary PAY 2 PLAY: Democracy's High Stakes follows the money in our elections and shows how outsiders are using their voice to be heard, including civil disobedience.