If you've ever applied for auto insurance you know your insurer will ask how many miles you drive each year. What may be surprising, however, is the impact those annual miles may (or may not) have on your car insurance premiums.

For the second year in a row, insurancequotes.com and Quadrant Information Services examined the economic impact annual miles have on the cost of auto insurance. In the end, the study found that someone who drives 15,000 miles a year pays a national average of 9 percent more for car insurance than someone who drives 5,000 miles annually.

See also: Have low mileage? You may qualify for a 17% car insurance discount

Mike Barry, vice president of media relations for the nonprofit Insurance Information Institute, says the study accentuates the broader correlation between annual miles and the cost of insuring U.S. drivers. The more miles one drives, the more expensive he or she is to insure.

"Auto insurers price their policies to reflect risk," Barry says. "And a driver who's driving more miles than the typical motorist is posing more of a risk to an auto insurer."

Some industry experts and analysts claim auto insurers should, on average, provide even more substantial discounts for low-mileage drivers, regardless of the state where they reside.

"The problem is that a lot of insurance companies and states depress or totally extinguish the importance of annual miles driven, which is unfair to all drivers," says Douglas Heller, an independent consumer advocate and insurance expert with the Consumer Federation of America (CFA). "Whether you're not driving much because you can't afford to, or because it's a conscious choice, you should get the benefit of being a lower risk."

The U.S. Department of Transportation calculates that the average American drives 13,476 miles per year. The financial consequences for auto insurance rates when you drive above or below that average varies depending on the state you call home.

According to the study, here are the top five states where auto insurance rate increases are the highest for driving 15,000 miles annually compared to 5,000 miles:

Conversely, here are the top five states where the difference between 5,000 and 15,000 miles barely registers: 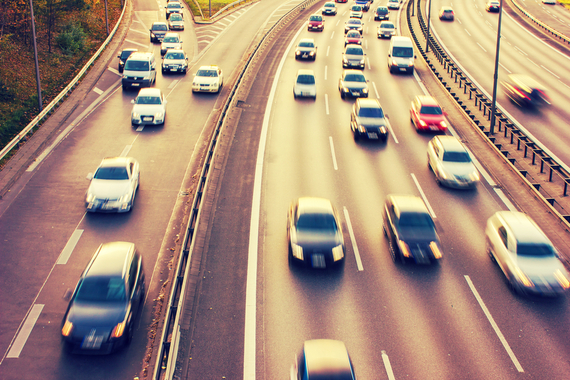 The reasons for these state-by-state discrepancies can be attributed to differences in how each state regulates insurance, says Eli Lehrer, president of the R Street Institute, a public policy research organization based in Washington, D.C.

"In most states, mileage just isn't that big a factor since insurers, on the whole, don't love using it because it's difficult to track," Lehrer says. "But with outliers like North Carolina and California, regulations play a big role."

For instance, California voters passed Proposition 103 in 1988, which significantly limited the factors insurance companies could use when determining auto rates, including a ban on using credit scores. Since then, insurance companies in the Golden State must base insurance premiums on three primary factors (and in this order of importance):

"Since California insurers aren't allowed to base your rates on things like your occupation or level of education, they have to emphasize driving-related factors," Heller says. "And the reason annual miles driven are so important is because it's a key and meaningful indicator of risk."

North Carolina, which falls on the other end of the spectrum, is a little harder to pin down. Lehrer says the Tar Heel State has a unique way of setting insurance rates. There, insurers propose new rates to the North Carolina Rate Bureau, which then sets a statewide base rate for all companies insuring in the state.

What's more, the state's insurance commissioner sets a cap on how much insurers can raise rates based on annual miles driven.

"I always have trepidations about analyzing North Carolina because they have such a unique insurance market," Heller says. "It always stands alone as a marketplace different than any other state in the U.S."

Should annual miles be a more important cost factor? 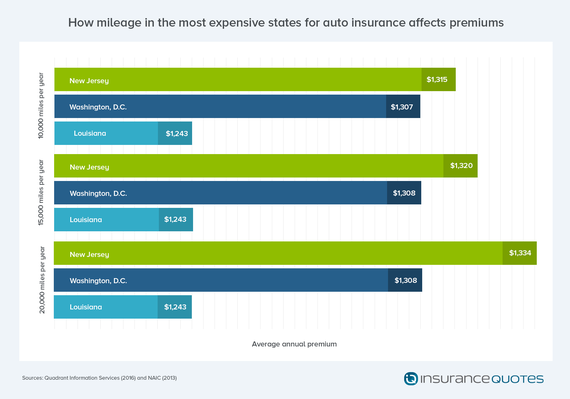 Sure, driving fewer miles each year will most likely save you some money on car insurance, but some experts and consumer advocates say low-mileage discounts should be even more significant.

"All the data I've seen shows an incontrovertible correlation between miles driven and claim frequency, and to whatever extent insurers may not be using that in their rating process raises a lot of questions," says Todd Berg, a Michigan-based attorney who specializes in auto and insurance law. "I think it's very interesting that we don't see more price flexibility when it comes to this issue."

"You're talking about the difference between someone who only drives to church on Sunday and someone who has a 100-mile commute every day. Those are two very different drivers," Berg says. "It feels like that 3 percent is just the insurance company's way of throwing consumers a bone, not a substantial reflection of lesser risk."

Tempted to lie about mileage? Here's how an insurer can found out 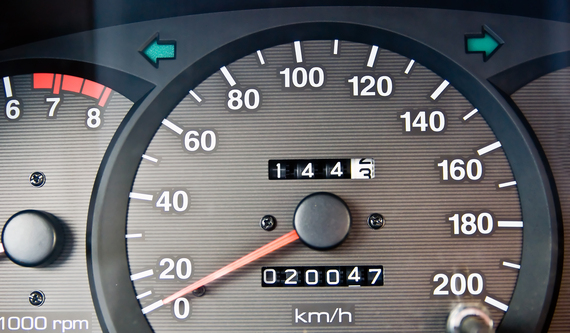 See also: How much time and money does traffic congestion waste?

Lying about the miles you drive may be tempting, but it's not a smart plan. Here's how an insurer can find out.

When applying for a new insurance policy, drivers are asked how many miles they drive on average each year. And while some may want to underreport this figure in hopes of paying less for car insurance, the consequences of lying can be severe.

"First of all, it's just unethical to lie about this to your insurer," Berg says. "Secondly, when you dip your toes into the waters of dishonesty with your insurance company you are slowly wading into the flood of insurance fraud, and that's definitely not where you want to be."

To be sure, your auto insurer isn't going to knock on your car door every month to check the odometer, but the consequences of underreporting mileage on your application may come to light if you ever file a claim.

"Let's say you apply for an insurance policy and you tell the insurer that you only drive 5,000 miles a year," Berg says. "Then, six months later you get in an accident and file a claim. Your insurer asks for an odometer reading and sees that you've racked up more than 10,000 miles since the date of your application. You're now in a whole heap of trouble and they will most likely void the policy, which means you get absolutely nothing."

What's more, Berg says insurers may go so far as to file a civil suit or criminal charges for insurance fraud, a felony in most states.

"Aside from the moral side of things, the consequences of being dishonest are just way too high," Berg says. "Honesty is the best policy."

So, if your daily driving habits suddenly change, let your insurer know. A new job may require a lengthy commute, or conversely, a retirement or work-from-home gig may result in fewer annual miles.

"Generally speaking, if you drive fewer than 7,000 miles a year your insurer will probably grant you a low-mileage discount," Barry says. "So keep your insurer up to date, or you might be losing out on some savings."

Finally, Barry suggests that consumers may want to consider researching pay-as-you-drive (or usage-based) insurance programs. These are all voluntary and drivers can earn discounts based on factors such as how well, far and often they drive.

Pay-as-you-drive programs require insurers to use telematics devices, smartphone apps or even existing technology built into the car (like OnStar) to record data regarding driver behavior and then transmit that to insurers to help set discounts, which typically range between 10 and 30 percent off the annual premium.

For instance, Progressive offers a program called Snapshot, which uses a small wireless device that plugs into the diagnostic port located under the dashboard of a car to capture how, when and how much someone drives. The device records how many miles you drive each day, how often you drive between midnight and 4 a.m. and how often you slam on your brakes.

After driving with Snapshot for 30 days, Progressive uses the collected data to determine your discount. The better your driving behaviors (i.e. fewer miles driven at night, no hard braking) the better the premium discount, which can be as much as 30 percent.

"Almost every major U.S. auto insurer is rolling out telematics products because many policyholders find they can save money when using them," Barry says. "It's still a small percentage of drivers who are signing up, but the numbers are growing, especially amongst younger drivers."