If you access the Internet daily, you've probably seen that the world's first, and arguably most influential roleplaying game, "Dungeons & Dragons," turned 40 a few weeks back. D&D is sort of a legend in the gaming industry, spawning countless imitations, thousands of products and shaping the industry as a whole for the past four decades. For the past few weeks, I have been trying to come up with the words to honor D&D. This was a huge challenge, because as cliché as it is, D&D is more than just a game to me.

Now, before you roll your eyes, and think, "Oh great, another sad, gay teenager story," let me clarify. I was never in such a terrible position that I considered taking my own life. Growing up I was privileged enough to be well-liked, earn good marks in school, and blessed with a loving family. This does not, however, mean that I had an ideal experience in middle school or high school, because, let's face it, no one does. "Dungeons & Dragons" saved me from becoming someone who just sits in the background, someone who lacks the confidence to try new things, and who is too scared to voice their opinions. It saved me from a life of not taking risks because I wasn't sure what would happen, and it saved me from choosing the path of least resistance.

Starting in eighth grade, I entered a rough period, because it was the first time in my life where I truly lost my way. Lost in the confusion of teenage hormones, complicated friendships and sexual confusion over who and what I was, I was ostracized by the other guys my age because I was "too girly" and I didn't connect with girls my age, because, well -- I'm a boy. I was bullied at school for being a "faggot" and while I put on a strong face for the world, and pretended I didn't care, it really destroyed me inside. I thought I wasn't good enough, and that people really didn't like me, all because of the rumors floating around about my sexuality. And here's where things started to go badly, and like many gay teens -- I felt alone. I felt like there was no one I could talk to. I thought no one else in the world knew what I was feeling, and what I was feeling was wrong. My escape from this was reading. I read, and I read, and I read. And after being introduced to R. A. Salvatore's Homeland, it was only a matter of time before I discovered "Dungeons & Dragons" and began to be fascinated by it. My first basic set, the 3.0 Black Box, was under the Christmas tree that year -- a gift from my brother. It's funny to think that he likely has no idea how much that gift changed the course of my life.

Aside from tinkering with the basic game with my brother, it was about a year before I actually dove into playing "Dungeons & Dragons." And like so many things in life, it happened by random chance. My freshmen year of high school there was a strange scheduling hiccup, and a number of my classmates and I were inserted into a uselessly short 40 minute study hall. Typically during the study hall, I would retreat into a corner of the room, and pour over the few D&D rulebooks I owned at the time. It wasn't long before one of my classmates asked me what I was reading every day, and I timidly explained what D&D was -- basically rules for playing pretend. Slaying dragons and stopping evil overlords with pencils, paper and dice -- lots and lots of funny-looking dice. This, ladies and gentlemen, was how I met my best friend throughout high school. It wasn't long after that that more people started asking me about my books that I was constantly cradling.

After some peer pressure to actually start an adventuring party, and a few weeks to prepare, two girls and four guys were squeezed in my parent's basement, sitting around a crudely drawn dungeon map, fumbling with strange dice, and pushing little plastic figures around the map, all while squinting at impossibly complicated character sheets that had been haphazardly filled out after hours of trying to understand the hundreds of rules that make D&D functional. While the game was slow moving, clunky, and I think created more questions than answers, I must have done something right, because everyone came back the next week to play again, and then the next week, and the next week, and every week for the next three and a half years. I have to say, my mom and dad certainly proved they loved me by putting up with a house full of nerdy teenagers every Wednesday for all that time, and investing in my growing collection of gaming accessories and source books.

Ever so slowly we picked up the rules, and began delve in treacherous dungeons, crawl through the corridors of haunted castles, and pick fights with fearsome dragons. And through the rolling of dice, the collective laughing and screaming of my friends-in-arms, and countless adventures across numberless worlds, I began to come out of my shell and formed the strongest and longest lasting friendships of my life. My life was changing.

Looking back now I can see it happening -- and my friends and family all agree with me -- as soon as I starting playing D&D my life changed for the best. I was happier, I was making connections and lasting friendships (the best friendships of my life), and not only that, but I was gaining confidence. I went from a mousey, shy and confused teen to a confident, assertive and creative young man. I became proud of who I was, and who I was becoming. I took the organizational and people skills I learned at the game table, and used them to become a leader at school, in the workplace and in my community. Of course, I didn't see this while it was occurring, and it was only pointed out to me recently by one of my favorite professors and advisers. She asked me, "Levi, where did you learn to handle conflict like that? How did you learn to multitask and handle stress in such a healthy way? Who taught you to be so well-prepared and think on your feet the way you do?"

And the answer is plain to me -- I learned from playing "Dungeons & Dragons." I am who I am today because of D&D.

There's of course no way I can say enough about "Dungeons & Dragons" and how it's changed my life for the best. The game has kickstarted my writing career, inspired my work in theatre and created friendships beyond counting. I can't just thank one person for it -- thousands of people have worked on making the game possible -- from Gary Gygax and Dave Arneson, the original creators of D&D, to the crew at Paizo Publishing who design my current favorite roleplaying game, the "Pathfinder Roleplaying Game," the list goes on and on. So here's to everyone who's ever had a hand in "Dungeons & Dragons": Thank you for making me who I am today, and making the world a better place for all of us. Thank you for giving the lost a place to go home to, the shy a place to find good company, and those that seek adventure a place to explore -- and those who aren't sure just what they are yet a safe place to grow into themselves. May the next 40 years be as good as your last, and may all your rolls be critical hits! 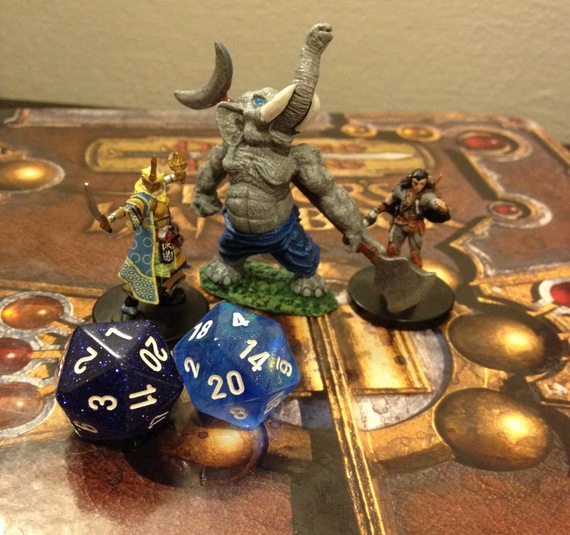 Student, University of Wisconsin at Milwaukee