Non-theatergoers will know her from her comic turn as Alec Baldwin's imperious mother in 30 Rock. I remember her from a sweeter moment, after a performance of her Tony-winning one-woman show, Elaine Stritch At Liberty.

In that autobiographical tour de force, which ran at the Public Theater and then on Broadway early in the last decade, Stritch reprised "Civilization (Bongo, Bongo, Bongo)," the showstopper that marked her singing debut on the Great White Way in the 1947-48 revue Angel in the Wings.

Because my dad, Carl Sigman, had known Elaine (he wrote the words and music to Angel with Bob Hilliard, a brilliant but less-than-organized songsmith whom Carl referred to as "that glob of talent"), an usher took my mom and me on stage to meet the star. We waited in estimable company, right behind actress/socialite/philanthropist Dina Merrill, to pay our respects.

When our turn came, Mom placed the original Playbill of Angel in Stritch's hands. When she asked "Oh, how's Carl" and Mom said he'd passed away not long before, Elaine paused and teared up, seeming to search for the right words. She quickly reverted to form, giving us an unforgettable send-off when she held out her hand, air kissed us and said, "Call me, darlings. I'm at The Carlyle." (Stritch famously lived at Manhattan's stylish Carlyle Hotel for many years.) She didn't really want us to call and we didn't really want to; why mess with perfection? 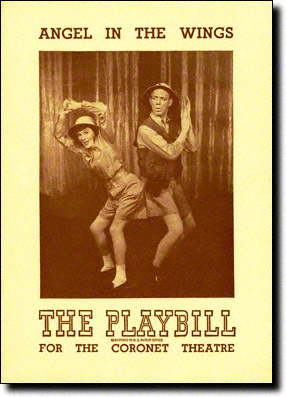 In the brief clip above from At Liberty, "Stritchy," as that ultimate sophisticate Noel Coward called her, describes how she convinced the producers of Angel in the Wings -- who'd hired her for a bit part -- to give her a song. That the song turned out to be the one that brought down the house night after night was quite a bonus.

"Civilization" went on to become a standard, with covers by Bing Crosby, Glenn Miller, Woody Herman, Jack Smith, and Ray McKinley. Louis Prima's hilarious rendering went Top 10 and Danny Kaye and the Andrew Sisters' call-and-response version reached the top spot on Your Hit Parade. But the inimitable Elaine Stritch was the only performer to bongo, bongo, bongo in two Broadway shows more than half a century apart.