Here's an interesting tidbit for all of your animation fans out there: An excerpt from the screenplay for Disney's Aladdin. To be specific, the scene where the Genie makes his dramatic entrance in this motion picture:

Aladdin rubs the lamp with his sleeve. It glows slightly -- and then, POOF! Colorful smoke spews out of the spout. It eddies and swirls, filling the cave, taking shape and solid form --

Towering above Aladdin is the gigantic GENIE of the lamp. He is a hip, hyper, mercurial Robin Williams type, full of exuberance, with a child-like vulnerability. 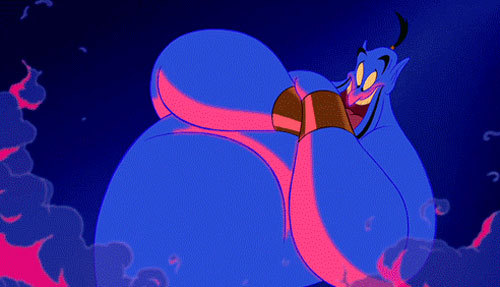 You caught that character description, right? A "Robin Williams type" ? There's a reason that Aladdin's co-directors Ron Clements & John Musker used this specific piece of language. You see, back in the early 1990s -- as Ron & John were working with Ted Elliott & Terry Rossio to hammer out a workable script for this proposed animated feature -- they hadn't actually signed Williams to work on Aladdin. Not yet, anyway.

"'Yeah, we wrote this part with Robin in mind. We didn't know if he would do it," Musker admitted during a recent appearance on ABC's Good Morning America. "We were totally walking down the plank. If he said no, we were going to be in big trouble because the whole concept for Aladdin was built around Robin."

Luckily, Ron & John had an ace up their sleeve: Master animator Eric Goldberg. Who -- after years of running his own studio over in London (where Goldberg had cranked out hundreds of hilarious animated television commercials) -- had recently decamped to Disney. And what was Eric's very first work assignment once he arrived at the Mouse House? Musker & Clements recruited Goldberg to create some test footage of the Genie which could then be used to persuade Williams to come voice this character. 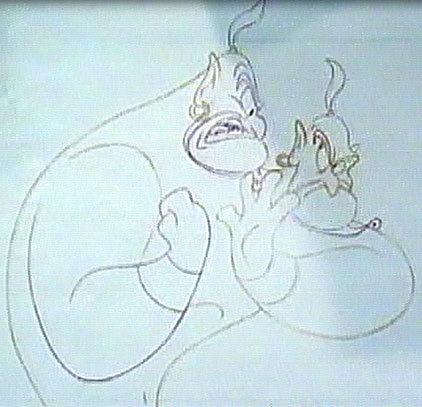 So Eric got himself a copy of Robin's 1979 comedy album, "Reality ... What a Concept." And after listening repeatedly to this Grammy Award-winning recording, Goldberg found two particular bits by Williams that really lent themselves to animation. One of which involved the Genie quickly growing two heads as this crazed cartoon character argued amongst himself about " ... the very serious subject of schizophrenia."

"And so Ron & John brought Robin in. First they showed him some concept art for the Genie character. Then they ran the test footage that I'd animated to those bits off of his comedy album," Eric recalled. "And I have to say one of the great thrills of my life was actually watching Robin Williams laugh at my animation. I mean, it doesn't get any better than that."

Once Williams saw Goldberg's animation test, he immediately agreed to voice the Genie in Aladdin. And just weeks later, Williams was in the recording booth riffing on the screenplay that Musker, Clements, Elliot & Rossio had written. 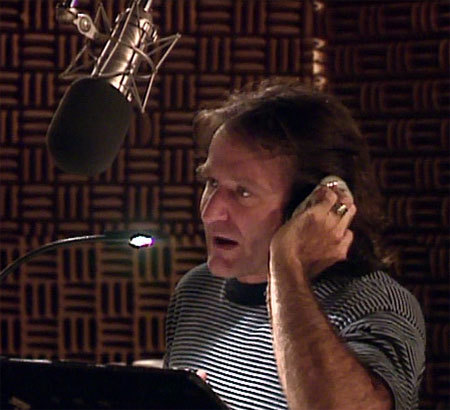 "Mind you, Robin was always a complete professional. He'd initially perform the scene as written. Only after we had six or seven takes recorded where Robin had followed the script would he then begin to improvise," John said. "From that point forward, Robin would stay within the overall structure of the scene but then begin riffing."

Some of these Aladdin recording sessions wound up being four hours long. With Williams exiting the booth drenched in sweat after improvising hundreds of comic variations on the Genie's as-written dialogue.

"And once Robin went home, Ron, Eric and I would then sit down in a room and listen to hours & hours of tape. As we then tried to reconstruct the scenes that we'd already written for Aladdin around these brilliant new bits that Robin had just improvised," Musker continued. "Eric was a crucial part of this process. He repeatedly found ways to fold Robin's riffs in. Create these great pieces of character animation that -- while they directly built off of something that Robin had improvised -- still managed to service the story that we were trying to tell with this movie." 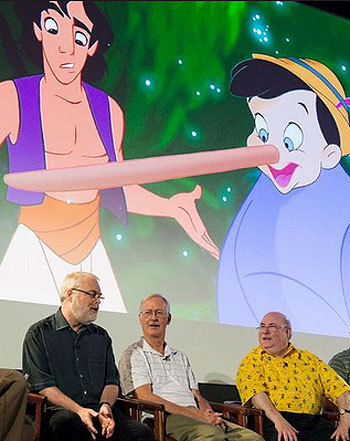 But in the end, given Aladdin's 90 minute running time, there was only so much room within the context of this animated feature for Robin Williams' wild improvisations. So a lot of comedy gold wound up hitting the cutting room floor.

We now jump ahead to 2014. Some 22 years after Aladdin was first released to theaters. And Walt Disney Studios Home Entertainment was already making plans to release the Diamond Edition of this Academy Award-winning film in the Fall of 2015 when the world learned of Williams' tragic passing.

After a suitable period of mourning, an idea begins to take shape at the Mouse House that the Aladdin Blu-ray should include some sort of tribute to Robin. Something that celebrated this man's genius. Which reminded people of all of the joy that Williams had brought into the world. 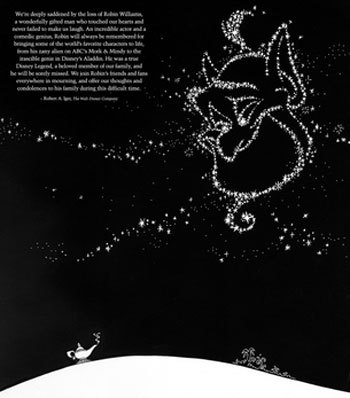 It's then that someone at Disney remembered those hours & hours of recordings that Robin Williams did for Aladdin. Which were filled with these extended pieces of improvisation that only a handful of studio insiders have ever heard.

And given that Goldberg was actually there for a number of those recording sessions ("That was one of the toughest things I ever had to do in my life," Eric remembered. "To be inside a recording booth with Robin and then not be allowed to laugh. Because if I laughed, I then ruined that take"), he was tapped to review these tapes. See if there was something that could be possibly culled out of all of this comic raw material that could then be used to honor Williams' memory.

This is where the Genie Outtakes featured on the Diamond Edition of Disney's Aladdin (which -- FYI -- hits store shelves today) came from. Under the guidance of Walt Disney Animation Studios' Classic Projects unit, Goldberg began working on this bonus feature last Fall. Eric first selected the pieces of audio that he felt best showcased Robin's comic genius. Then -- over a five month period -- Goldberg created all of the drawings and key pieces of animation which are featured in this over-seven-minutes-long vignette. This bonus feature shows the Genie changing into Glinda the Good Witch from The Wizard of Oz, Obi Wan Kenobi from Star Wars, even Edward G. Robinson and Don King. This character also briefly transforms into a football ref, a sportcaster and a punch-drunk prize fighter. 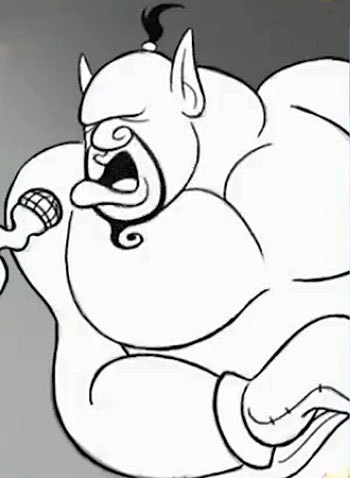 By the way, if you -- like me -- enjoy Eric's distinctive drawing style, then you're really going to want to check on his new book, "An Animator's Gallery: Eric Goldberg Draws the Disney Characters" (Disney Editions, September 2015). For this 192-page hardcover not only includes his inspired take on the Genie but a Goldberg variation on virtually every major character from the Disney & Pixar film catalog.

Getting back to Aladdin now ... When I got to the chance to interview Eric this past August at the D23 EXPO, I asked him -- when it came to animating the Genie -- what was his biggest challenge. And Goldberg's answer to this query was kind of surprising.

"It honestly wasn't any of the comic stuff that this character did. It was the more sincere moments in this movie, when you had to actually believe that the Genie and Aladdin genuinely cared for one another. That their friendship really meant something," Eric explained. "For this film to really work, the audience had to believe that Aladdin was really giving something significant up when he freed the Genie." 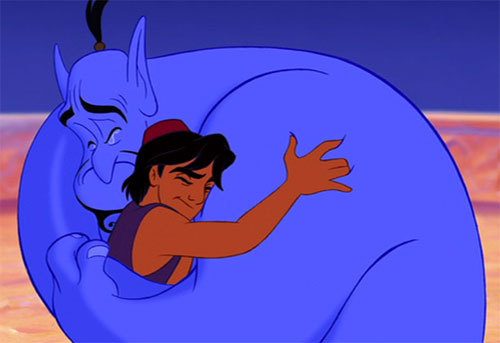 "That's why -- in the end -- I think we were so fortunate that Robin agreed to voice the Genie in Aladdin. I mean, sure. He obviously had the comic chops for this character. But what a lot of people don't realize was that Robin was equally committed to making sure that the emotional parts of this story work. He worked just as hard -- if not harder -- in the recording booth to make sure that the Genie came across as a sincere character. Not just a comic figure," Goldberg continued. "And if it wasn't for Robin's natural warmth as a performer, I seriously doubt if we could have ever pulled that off. Got the audience to emotionally invested in the Genie's plight."