Americans spend 6.4% of GDP on education (3rd highest amongst OECD countries), but has one of the lowest participation rates in upper secondary education (19/28 of OECD countries). The cause of this lackluster performance can be attributed to the misallocation of funds. These resources have been deprived from those who need it most - our youth.

Every Student Succeeds Act (ESSA)
The ESSA was signed by President Obama on December 10, 2015, which supersedes the No Child Left Behind (NCLB) Act of 2002. One of the weaknesses of the NCLB Act was the implementation of a one-size-fits-all solution for the entire public school system. It didn't work as intended because it had set "unrealistic goals for academic gains." Under the ESSA, a student's performance as well as interventions for struggling schools are developed and driven by the state, rather than the federal government. 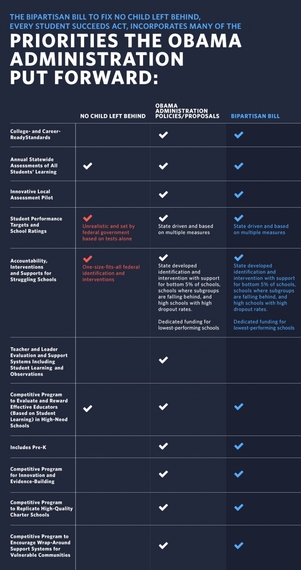 State of Mind
For the state of Utah, resource allocation will be a challenge because expenditures per pupil are the lowest in America. This puts tremendous pressure on district officials to distribute resources with prudence.

Allocating resources efficiently requires an economic mind and a disciplined hand. School officials need granular information on which programs are effective and which ones need nurturing. Rational decisions are driven by data, which can be learnt and transferred from one legacy to another.

Technology is the Great Equalizer
The Utah Data Alliance (UDA) harnesses the wealth of Utah's educational information. It is a multi-agency collaborative that seeks to improve education and workforce policy and practice through educational research and analysis. The Utah Data Alliance database contains aggregated information related to students' educational experiences and workforce participation. This feedback is critical for measuring, monitoring, and enhancing key performance indicators to enable schools to make smarter decisions.

"I'll huff, and I'll puff, and I'll blow your house in."
Critics argue that the state government is collecting unreasonable amounts of information about its students, and making that information available to private companies as well as the federal government.

"Their [UDA] operations are not governed by state or federal law, but only by the promises made in the grant application and a "memorandum of understanding" between Alliance members."
- Connor Boyack, Salt Lake Tribune

This is simply inaccurate. Any organization that receives funding from the federal government is required to comply with Family Education Rights and Privacy Act (FERPA). As many readers may know, FERPA is a law that protects the privacy of student education records. UDA is FERPA compliant.

Other critics may argue that laws are only a passive deterrence; it does little to prevent hackers. The UDA takes further steps to protect and prevent the breach of privacy, including:

Even if a breach were to occur, the UDA only reports in aggregate data in cell sizes less than ten. Persons with access to the data cannot identify or attempt to identify individuals in the database.

Stone Soup for the Soul
The value of sharing is not only beneficial, it is taught in our school curriculum. Sarah Lallatin is a 4th grade teacher at Timpanogos Academy, a public school in Utah. One of the literatures in her book list is Stone Soup. It is a classic tale of cooperation and collaboration in the midst of scarcity. Perhaps the we could learn a lesson from our schools.