The scientific evidence is now clear. If you want to keep your mind sharp as you age, you need to keep physically active. The explanation has to do with the broad-reaching effects of exercise on the chemistry, physiology and structure of the brain.

As a teenager, I was on the swim team in high school, and I remember being able to run for hours at a time at a very fast pace. But as I got older, had children and got really busy with work, I became more and more sedentary, spending more and more time in front of my computer rather than at the gym. Ironically, my most inactive time was when I was conducting research trying to figure out how exercise boosts memory.

After collecting lots of original data, attending numerous conferences, and presenting my work in front of other experts in the field and discussing their findings, I have recently faced the fact that my sedentary lifestyle was damaging. In a major shift of priorities in my life, I now swim every day for 45 minutes at the university pool, mostly because I want to avoid the cognitive decline that comes with aging and offset my chances of getting the dreaded Alzheimer's disease. The immediate benefit is feeling much more awake and focused during the day that I am exercising, and I find I am much more efficient and productive at work as well. Those of you who exercise regularly: Do you find this to be true for you?

You might think it is strange. How could exercise, which engages your muscles and your heart, have a major impact on your brain? Well, if you think of the body as a highly integrated and coordinated machine, then when you exercise, the machine has to switch into major overdrive, expending much more energy than typical and producing much more force. Since it is your brain telling your muscles what to do, the cells in your brain start firing in unison and with higher frequency, producing strong electrical signals that are detectable even outside the brain.

All this effort in the brain and in the muscles requires energy. And to keep your brain alert and energized, the brain tells your adrenal gland in your body to release a chemical known as adrenalin into the blood. Your brain also tells many organs in your body to release energy into the blood for your muscles and brain cells to use to keep up all their activity. Well, guess what? Adrenalin and energy delivered to the brain enhances memory. Give humans or animals adrenalin and they do better on memory tasks. Give them energy on top of adrenalin and they do even better.

I really hope I can keep up my exercise regimen, but the real benefit for me is not the adrenalin rush or the post-exercise performance advantage. It is the long-lasting protection against deterioration of my brain as I age. I want to see my kids grow up with as intact a mind as possible. I cannot emphasize how important this point is. It's a major clinical breakthrough. Physical activity is the key ingredient to encouraging brain activity. Stimulating the brain in other ways, such as doing crossword puzzles, card games, or computer games, does not do the trick. Doing crossword puzzles makes you good at crossword puzzles, and doing math problems makes you good at math, but this does not necessarily make you more alert when you drive or help you think creatively or keep up with your grandchildren. That's the amazing thing about exercise. Exercise improves performance across the board.

The reason largely has to do with a part of your brain known as the hippocampus, which stands out above all others as being strongly affected by exercise. Large ensembles of brain cells fire in synchrony in this region with frequency and amplitude closely related to the intensity of the exercise. The repeated activation, incredibly, results in the generation of entirely new brain cells, causing the brain structure to get larger. 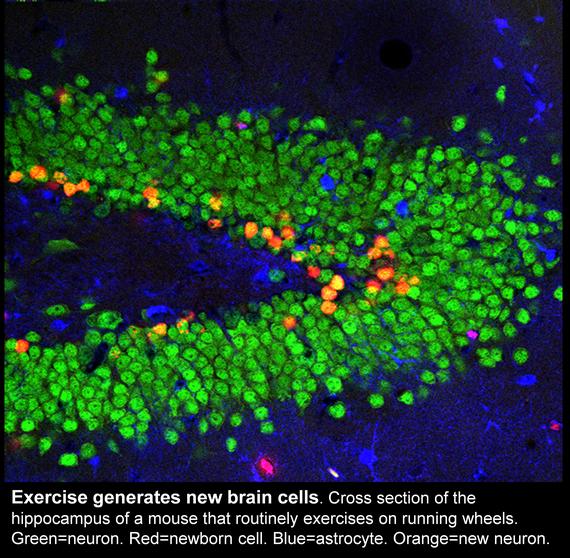 And here is the punchline. Not only is the hippocampus the major brain region affected by exercise, but it is the major player in learning and memory, and the hotspot for Alzheimer's disease. In humans, on average across the population, the hippocampus declines approximately 1-percent a year from the age of 20 on. However, exercise can completely reverse the decline, and importantly, it can do so at any age.

When you look at the evidence, I am embarrassed it took me so long to reincorporate exercise into my life. But I am on it now. Talk to you later -- I am going for a swim.

Associate Professor of Psychology and Neuroscience at the University of Illinois