This story originally appeared on Celsias.com, a site about doing practical things to combat climate change.

Perhaps they are the superheroes of tomorrow. Living and thriving in the most inhospitable conditions on Earth, tiny bacteria-like microbes known as extremophiles might soon have an oversized effect on our human world. We currently know little about these organisms that once remained hidden to us. But what we have discovered so far is intriguing--and, in fact, perhaps these microscopic creatures will help us save the world. 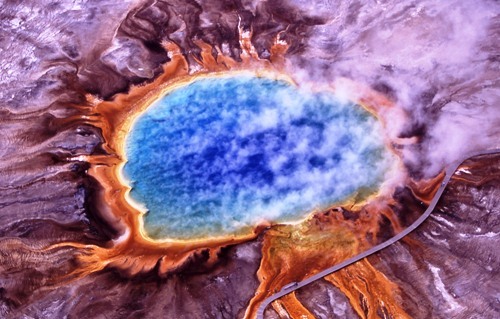 Research indicates that along with having the potential to help us develop countless new pharmaceuticals for treating diseases, some extremophiles might also possess the unique abilities needed to help us combat global warming and reduce pollution. In a less concrete way, they also might help us understand if life exists elsewhere in the universe, and if so, how "life" might be defined in different terms than what we currently accept. If these characteristics do not qualify these creatures as superheroes, then I do not know what does.

Take an extremophile known as Deinococcus peraridilitoris as an example. Living in the soil of Chile's Atacama Desert, arguably the driest desert in the world, it can survive with what basically amounts to no water. It was discovered only six years ago--so pause for a moment and think. Imagine what we might learn from this organism.

There is also Pyrodictium abyssi, an extremophile which lives near volcanic vents at the bottom of the ocean. It can survive in boiling water. It is part of a group of extremophiles that are highly tolerant of extreme levels of heat known as thermophiles. Besides the bottom of the ocean, thermophiles live in places like the U.S.'s Yellowstone National Park and sometimes produce bright and unique colors in hot springs.

But let's also not forget Desulforudis audaxviator. It was discovered last year in South Africa, about 1.7 miles below the Earth's surface in a gold mine. It is considered to be the world's only one-species ecosystem. It survives without oxygen, light, and is exposed to extreme heat. It lives by combining water with other elements, such as decaying uranium, that radiates from the rocks surrounding it. Wow.

While what we can learn from the extremophiles mentioned above is still not clear, some of their peers are already proving to have the potential to assist in creating groundbreaking human applications.

Extremophiles and the Transformation of Modern Medicine

If you like watching IMAX movies on DVD and are interested in extremophiles, I recommend renting Journey Into Amazing Caves. The film details the dangerous deep cave explorations of a school teacher and a scientist. Their primary goal in these explorations was to collect extremophiles. They hoped that these organisms would help produce valuable new drugs to fight disease.

If you think the premise was far-fetched, you might be surprised to learn that deep within the United States' Carlsbad Caverns National Park, in 1986 a special event took place. An until-then relatively unknown area known as Lechuguilla Cave was explored more thoroughly.

It turned out that Lechuguilla is the fifth longest cave now known to exist in the world and also is now considered one of the most pristine and unique because of its historic lack of human visitors. Aside from these important discoveries, within one of the cave's stagnant pools of water, several scientists found bacteria. They decided to collect these odd forms of life for research. After running some preliminary tests, these rock-eating creatures were found to potentially possess the ability to kill breast cancer cells while leaving healthy cells intact.

If that story alone doesn't get you more excited about superhero extremophiles, here's a more recent tale to ponder. Several months ago scientists at the University of California at San Diego published an exciting paper in the prestigious journal Science. Before I explain what the article was about, first I should give a little background.

The scientists of discussion were previously known for pioneering the use of a green florescent protein found in jellyfish. They refined this protein so that biologists and medical researchers could more easily watch the processes that happen inside the cells of organisms. The only problem was that the florescent protein could not last for very long in living cells. Nonetheless, according to Wired magazine, this application was "considered one of the great advances of modern science, arguably on par with the development of the microscope." 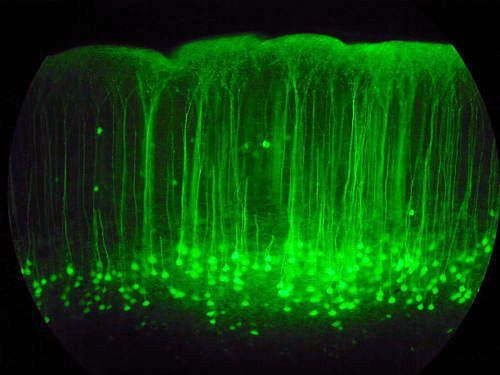 A slice of a mouse's brain, magnified 20X, and illuminated with green florescent protein (Image via cudmore on Flickr)

For their work with the protein, known more concisely as GFP, the scientists won the Nobel Prize for chemistry in 2008. So what's their new paper about?

These all-star scientists have now used an extremophile known as Deinococcus radiodurans to produce infrared light producing proteins that could be used more effectively to study processes occurring in living cells, and in fact "lighting up entire organisms as completely as GFPs have individual cells." The applications of this development seem enormous. Imagine the power of watching what goes on inside of cells in real time-- for instance it's possible to think we could better understand how diseases spread, and then perhaps better know how to cure them.

Extremophiles and Our Environment

While extremophiles have produced exciting developments in the world of medicine, they are not "one trick ponies" to the scientific world. They might also provide some unique and valuable environmental services.

One extremophile found in Yellowstone National Park has shown promise in making the process of industrial bleaching cheaper and more environmentally friendly by neutralizing harmful hydrogen peroxide in wastewater. Yet another recently discovered thermophile in the hot ocean depths is "also unusual because it relies on iron to digest food and produce energy. Such organisms show promise in generating electricity from waste products and in removing radioactive metals from the environment."

But beyond reducing pollution and producing electricity, could an extremophile help produce energy? Yes. A species from deep below the Mediterranean Ocean is being tested as a potential conduit for more efficiently processing biomass into biofuels like ethanol--something that if successful could help reduce greenhouse gas emissions by subsequently creating an industry that could rival corn-made ethanol. It is thought by some that making ethanol from biomass produces fewer greenhouse emissions than it does by making ethanol from corn.

But what is perhaps most exciting about extremophiles and the environment is how they might help us to fight global warming. For instance, a recently discovered species consumes methane for its energy use, and could be used to reduce methane emissions from landfills. It was among 1000 species of extremophiles recently catalogued in geothermal areas of New Zealand--many of which are new to science.

Methane traps approximately 20X more atmospheric heat than carbon dioxide, making it a significant contributor to global warming. On the bright side, it might eventually be used as a significant energy source. Going back to the negative though, it is also heavily produced, rather than consumed by a number of other extremophile species. Some of them are involved in the production of rice, which is thought to be responsible for approximately 10-25% of methane production worldwide. The good news is that scientists have mapped the genomes of some of these important species, and might be able to genetically engineer a new variety of these microbes to help reduce methane emissions from rice production.

What's also interesting is how global warming, while no doubt a serious problem, is also revealing new extremophile species. In Peru, researchers have inventoried new extremophile species that are quickly colonizing high elevation areas in the Andes Mountains, where glaciers are rapidly receding. These microorganisms are laying the groundwork for new plant communities where glaciers once existed. And it is exactly this type of occurrence that is truly the most fascinating aspect of extremophile life to some scientists.

Extremophiles and the Search for Life Beyond Earth

The field of astrobiology concerns itself with the "study of the origin, evolution, distribution, and future of life in the universe." So it should be no surprise that the world of extremophiles has become a key area of research for astrobiologists.

Many of these organisms might indicate how life on earth began. Starting with the most elementary building blocks, extremophiles might help us understand what form life takes on other planets in our own solar system, as well as in galaxies farther away. Once again, think about what extremophiles are. These organisms live and thrive at the most extreme conditions of earth, whether it's at the bottom of oceans, in the driest of deserts, in the depths of caves, the heights of towering mountains, in freezing cold, or explosive heat: it's no wonder that they capture our imagination.

The popular filmmaker James Cameron studied extremophiles while making his recent film Aliens of the Deep. In an interview about the film, Cameron described the deep sea underwater volcano-like areas he filmed. He explained that

So you have all these chemicals raining down on the bottom, and it's stuff that will kill you and me. But nature, in its ingenuity, has figured out a way to use this chemistry to sustain a completely different type of life than we experience here at the surface. That's what's fascinating to the astrobiology community. They're saying, wait a minute, if you've got chemically supported life down there, as opposed to life that relies on photosynthesis, then that's something that might theoretically be able to exist in an aquifer on the surface of Mars.

If you have more than a simple curiosity about what "life on Mars" might look like (or did look like at some point in time), it probably is not a surprise to you that the aforementioned Atacama Desert in Chile is thought to be the most similar landscape on Earth to that of Mars. Mars enthusiasts have been interested with the area for sometime, and are no doubt excited by the recently discovered extremophiles living there.

The search for what life might be like beyond Earth has also stretched to the highest place on the planet. An American astronaut recently climbed to the top of Mount Everest and collected extremophiles. He cited the purpose as being part of the quest to understand what life on Mars might be like.

So if you have been wondering what the next trendy adventure vacation experience will be-- a safe bet might be on collecting extremophiles in some inhospitable, exotic locale. Even if you don't find the key to understanding the origins of life in our universe, perhaps you might find an organism that leads to medical breakthroughs or environmental benefits.

The Superheroes Within Ourselves

As I explained earlier, despite the exciting applications of extremophiles, we really know very little about these tiny lifeforms. According to one estimate, "Microorganisms make up 50 percent of the world's biomass [in other words: all living things] but... scientists know only 5-10 percent of these species." While not all microorganisms are extremophiles, this certainly gives us an idea of how many of these unique species are still unknown to us.

While this statistic perhaps tells us that our quest to find superhero creatures is worthwhile, we must also look to ourselves and our human ability to change our behavior to improve our lives. Whether it is our personal health or our ever-warming planet, the world cannot be saved by technology and extremophiles alone-- we must also play a part. We too must be the superheroes of tomorrow. But as any superhero knows, a helping hand always goes a long way.