By Marysue Rucci | Off the Shelf

When I received the submission Little Bee by British author Chris Cleave in 2007 and read the first lines--"Most days I wish I was a British pound coin instead of an African girl. Everyone would be pleased to see me coming."--the world fell away.

Every reader knows the sensation of falling for a book. You're buoyed by voice, by character, by story. As an acquiring editor, it's my ideal, each time I open a submission, to check those boxes and be open to falling in love. 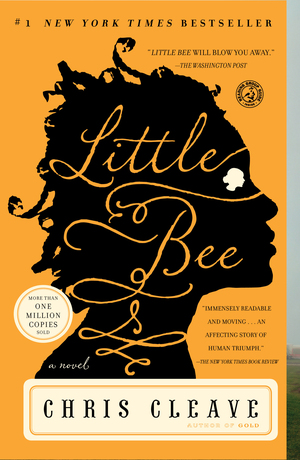 The arresting voice of the title character Little Bee, a sixteen-year-old Nigerian girl seeking political asylum in the United Kingdom, is the beating heart of this gorgeous novel, and its poetry and humor have an enveloping rhythm.

Further down the first page, Little Bee says, "A pound coin can be serious too. It can disguise itself as power, or property, and there is nothing more serious when you are a girl who has neither." Here I felt a mix of near-deranged excitement (this could be IT!) and surrender: Tell me the story, Chris Cleave.

And what a story it is. The novel explores an essential question of humanity: How far would you go to help a suffering stranger?

Little Bee has spent two years in a detention center outside of London when she is released by error. She has no legal papers, but she does have the driver's license of a British man named Andrew O'Rourke, whom she met on a beach in Nigeria years earlier. When she knocks on Andrew's door, his widow answers.

Sarah O'Rourke is struggling to make sense of her husband's death, trying to comfort her five-year-old son Charlie, and attempting to keep her marital secrets hidden. Sarah is a fascinating character but by no means a given protector or safe haven for Little Bee.

It could have been hubristic. Instead, it is triumphant. These women are fully realized, disparate characters whom readers soon learn have a shared trauma. And between them is Charlie, an indomitable, fatherless five-year-old who refuses to remove his Batman costume and divides the world into "goodies" and "baddies." Charlie is vivid and unforgettable. His protection and succor become these women's shared purpose.

When I finished reading--an act requiring an inordinate amount of tissues--I knew I had to publish this novel. Little Bee had transported me, thrilled me artistically, moved me deeply, and made me think intensely about the lottery of my birth, and my responsibility thereafter.

Like the best literary fiction, Little Bee expands our powers of empathy, and our understanding of the world at large. It is relevant and perhaps even more resonant nearly a decade after I first read it, given Europe's current immigration crisis.

Little Bee became a #1 New York Times bestseller. It is one of my proudest career achievements to have shepherded this book into the world. I believe a book like this--one that you fall for, one that breaks your heart in the best possible way, one that poses a larger existential question--leaves a mark that stays with you long after you've turned the final page.

Marysue Rucci is vice president and editor-in-chief of Simon & Schuster, where she oversees the fiction program and acquires a range of fiction and nonfiction. She is the proud editor of Little Bee, as well as Chris Cleave's forthcoming novel, Everyone Brave is Forgiven, published by Simon & Schuster.