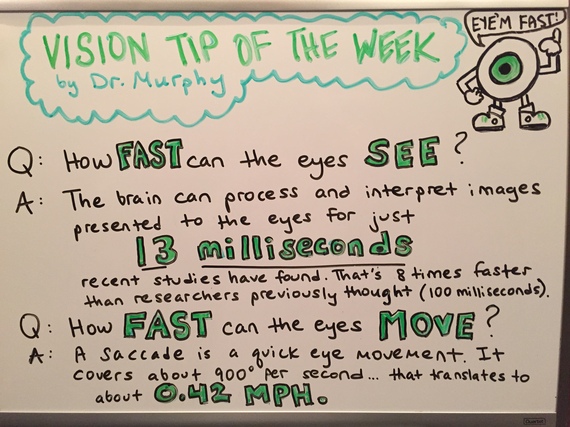 I know the eyes are fast. Our vision seems almost instant. But just how speedy are our eyes?

First of all, how fast can they see? In other words, what is the minimum length of time an image can be shown and correctly identified?

In 2014 a study by Potter and colleagues at MIT revealed that the brain can process and interpret images presented to the eyes for as little as 13 milliseconds, eight times faster than what researchers had thought in the past (100 milliseconds).

Second, how fast can our eyes move?

A saccade is a quick eye movement. It has been long understood that saccades move at a maximum peak rate of about 900 degrees per second but what does translate to in terms that are easier to understand? Apparently, someone was wondering the same thing and actually took the time to do the math and came up with a speed of about 0.42 MPH. Now that may sound "slow" but when you think about how short of a distance the eyes have to travel to switch their direction of gaze, it is quite fast.

Another "science hidden in plain sight" question answered in a flash!