Southern leaders in some 35-plus countries have made public commitments to advance financial inclusion in their domestic markets. They are acting on the evidence that poor families and small businesses in the informal economy need access to a broad range of financial services, and when the formal financial sector fails them, they have to rely on informal mechanisms such as the rotating savings club and the money-lender. These age-old mechanisms tend to be unreliable and can be very expensive.

In the aftermath of the global crisis, public opinion in the North is less convinced of the merits of an inclusive financial system. How, exactly, does it help, when the reckless expansion of mortgage credit in North America just triggered the deepest recession in recent memory?

A new set of applications illustrates the power of financial innovation for the poor. The mobile-phone based electronic money transfer M-PESA (Pesa is "money" in Swahili) in Kenya has turned out to be a real game-changer. It has nearly fully penetrated the market, including at the base of the pyramid (page 47 of Mobile Usage by the Base of the Pyramid in Kenya), reaching at least 84 percent of Kenyans living below $2 per day. People use M-PESA on a daily basis and the brand name has become a verb. Much like "Googling" -- unimaginable just 15 years ago -- it has become universal.

A set of emerging businesses that leverage the existence of a ubiquitous, electronic retail payments system is particularly exciting because they link financial innovation more directly to tangible benefits. Take household electricity as an example. About 80 percent of Kenyan households rely on kerosene for lighting because they aren't linked to the national electricity grid due to their remote rural location and high costs of connecting (at least $412 or 35,000 Kenyan shillings). Instead, many Kenyans in rural areas buy kerosene to power their homes, which costs on average 50 shillings a day (about 18,250 shillings or $217 per year) and emits fumes that take a toll on a family's health. For an investment of 16,900 shillings ($199), families could achieve the equivalent amount of energy through solar power that's free once after initial investment is paid off.

The start-up M-KOPA ("to borrow" in Swahiili) has acted on this insight. It installs solar panels and a wireless payment and monitoring device, letting the household pay back the investment in small installments. You could think of this as micro-leasing or asset-based finance. It works. M-KOPA welcomed its 10,000th customer in April, and most customers own their devices within a year. The short-term benefits are obvious: poor families get cheaper and cleaner energy. Additional long-term benefits are up to the imagination. Children can study in the evenings, allowing for a better future, and owners of the devices have already started small side businesses by letting their neighbors charge their cell phones.

My colleagues at CGAP have identified more than 60 start-up businesses in this new industry of digital finance "plus" innovations. Most of these businesses are in Kenya and Tanzania riding on the underlying success of mobile money in these two countries, and most of them are in the energy and water sectors, which lend themselves to the form of micro-asset-based finance that a ubiquitous electronic retail payment system has made viable. 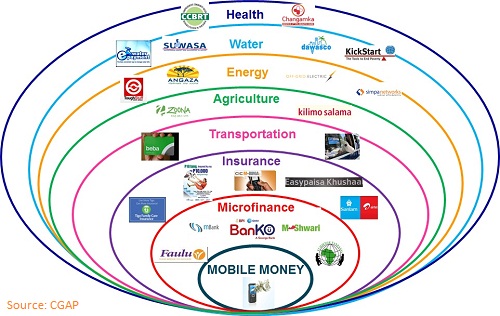 Grundfos' Lifelink in Kenya, for example, sells water usage services by allowing customers to purchase water from smart-card operated water pumps. Lifelink's pumps are designed to pump water for entire communities. Customers have smartcards on which they load money through M-PESA. The Kickstart service, by contrast, sells personalized small water pumps through a layaway service that primarily targets farmers. Farmers make an initial deposit through M-PESA. In the initial pilot, 95 percent of farmers made full payments within three months, a lot faster than what it would take farmers to save up to purchase a similar pump.

As mobile money services spread in developing countries, so will these types of innovations. Financial services are a means to an end. Ultimately, they need to help people capture opportunities, build assets, manage cash flow spikes, and mitigate risks. The financial services innovation of the Global South teach us new ways of how financial innovation can address real needs of the world's poor.