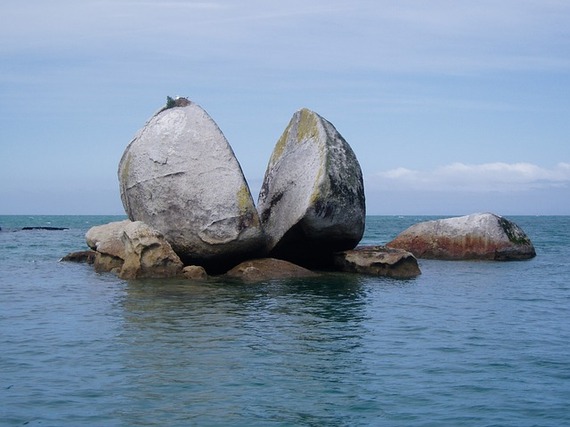 In recent news, George Fox University, based in Newberg, Oregon, has denied a transgender student housing that corresponds with the gender with which he identifies. To be "fair," the university has provided housing but not the housing requested, and not with the "general public" that accords with the student's identified gender.

We affirm the dignity and humanity of every student -- each of whom is an image bearer of God.

These commitments don't always lead to easy answers in an increasingly complex world. But George Fox is very conscious of the need to approach difficult questions with grace, understanding and an abiding love for our students, faculty and staff. This is why we are disappointed in how the situation has escalated.

A petition posted online yesterday accuses the university of denying appropriate housing to a transgender student. The petition -- created in coordination with a Portland attorney and activist -- does not give a complete picture of this complex situation.

Both religious and non-religious universities are struggling with appropriate ways to support their transgender students. Over the past several months, George Fox Student Life staff has spent many hours with this student hearing his story and offering support. Out of respect for the student's wishes, university staff refers to the student using the masculine pronoun. At this time, the student has not legally changed genders.

H. Adam Ackley wrote a great analysis of the situation here on The Huffington Post, in which he says:

[T]he Christian college George Fox University is refusing to allow Jayce, a transgender student, to live on campus in housing appropriate for his gender and is moving forward to develop an official policy that will restrict housing to being based exclusively on the biological sex that was assigned to their students at birth (not recognizing even intersex or ambiguous, non-binary birth gender, let alone trans* identity).

The issue is this. GFU chose to respect the student's identity in their press releases and personal and public communications by referring to the student "using the masculine pronoun." Great, as they should. Jayce identifies as a male and should be referred to as such. It should be acknowledge that this is a great step for GFU and Christian organizations. I have been around many conservative folks of faith who continue to identify people using the incorrect personal pronoun and insist upon the designation from birth rather than from the person's identity. However, while this is a positive move, we cannot forget that the whole issue has come up based upon GFU's choice not to identify Jayce with his identity but with his birth-assigned sex, female. GFU has created a glaring double standard and created a dual personality by which they deal with him. Jayce is both male and female in the eyes of GFU. Jayce is both cisgender and transgender in the eyes of GFU. Jayce is both in and out, accepted and non-accepted, split down the middle to fit various policies. This splitting of identity, and the creation of the other, is a horrendous crime against the basic unity and humanity of Jayce as a created being. God instilled an identity, one person and one humanity in all of us. It is our sin and denial of that identity that creates multiple splits. God created a body of humanity and a body of Christ, one person with one identity.

GFU should not get to respect a student on paper, in press releases, and in letters by using their preferred pronoun but then in practice and policy choose not to. If you choose to see Jayce as he is in one context, you must see him as he wholly in all situations. We cannot create a calculus of situational ethics in which students and others are sometimes in and sometimes out. What they have created is a person who sometimes fits their standards and sometimes does not. They have created a person who is sometimes acceptable and sometimes not. God created Jayce as one being, but GFU has split him into many.

George Fox, you don't get to decide when Jayce is acceptable or unacceptable. I know you know these concepts to be true. You have even posted them on your website. Your diversity page calls to the fact that "forms of division are destructive to redemptive community." You continue to say:

Scripture is clear that the outpouring of the Holy Spirit following the resurrection of Jesus Christ enacts a form of community that at once embraces and transcends our differences. In Jesus Christ our unique, individual identities are both preserved and liberated to engage in redemptive community and in the reconciling work of Christ in the world. We believe that God values each of us in our uniqueness. Therefore we seek to be a community that celebrates the uniqueness of each of its members....

I commend the sentiment, but it appears to only be sentiment. Why is it that only some receive the support of this theology? How is it that you make such a profound and positive statement but then undermine it completely? You ask for the GFU community to transcend difference but single out one student for his. You understand that God values our uniqueness but then create a line where someone's identity may be too far. You do not celebrate Jayce but keep him at a distance, splitting his unity into pieces that fit your agenda.

The double standard you have created, of sometimes-OK and sometimes-not-OK, is sinful. God asks us to follow in God's steps to create unity and wholeness and to reconcile the broken with their identity. When people of faith create divisions, we are not doing God's work. On paper you call Jayce a he. In housing you call Jayce a her. You can't have both. Jayce is one person, as God created him to be.

*GFU may be the first Christian university to have a URL like georgefox.edu/transgender.