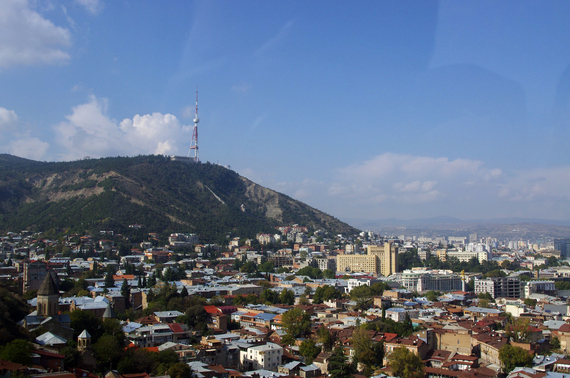 Score one for public engagement in a former Soviet country.

Grassroots protests over Georgian leaders' plans to cozy up closer to the Russian energy giant Gazprom have led to the government dropping those plans.

It's good that the leadership has done this, because the Kremlin uses Gazprom as a geopolitical weapon. If the company had been able to grab a larger share of Georgia's gas supply, the Georgian government would have been subjected to ever-increasing political demands from Moscow.

Russia's dominance of Georgia's neighbor Armenia's gas and electricity businesses shows what could happen to Georgia: Since Russia could cut off Armenia's energy at any moment, Yerevan has no choice but to acquiesce to whatever demands the Kremlin makes on it.

The story of Georgia's leaders deciding to play footsie with Gazprom involves duplicity and greed.

The duplicity started with Georgian Energy Minister Kakha Kaladze holding a series of negotiations with Gazprom over restructuring the company's energy deal with Georgia -- without telling the Georgian public.

The way to prevent a potential gas shortage in Georgia, Kaladze said when news of the talks surfaced, was for Gazprom to supply Georgia with more than the 12 percent of gas it now provides.

Another element of Kaladze's duplicity was his assertion that Georgia had to engage in dirty dancing with Gazprom because the country needed to diversify its energy supply.

Increased economic dependence on Russia means increased political demands from the Kremlin -- with the threat of a disruption to your economy if you don't meet the demands.

The most blatant component of the Georgian government's duplicity was Kaladze's phony contention that Azerbaijan, which supplies 88 percent of Georgia's gas, would be unable to meet additional Georgian demands. Azerbaijani officials all the way to the president quickly denied that assertion.

The greed in the Gazprom-Georgia saga revolves around the country's richest man, and chief political orchestrator, holding 1 percent of Gazprom's stock.

Although that is a small percentage, Gazprom earns tens of billions of dollars a year in revenue, so billionaire Bidzina Ivanishvill's stake generates a hefty annual return.

A former Russian oligarch and former prime minister of Georgia, Ivanishvilli is now the power behind the throne in his homeland. No important government decisions are made without his sign-off, Georgian political analysts say.

Unfortunately for Georgia's leaders, the public viewed the negotiations -- correctly -- as an attempt to help Gazprom and its Kremlin masters at the expense of Georgian sovereignty.

Public outrage started when news surfaced from outside Georgia that the country's energy minister had met with Gazprom three times in Europe to discuss restructuring the gas deal.

Although Kaladze tried to categorize the talks as routine, Georgians weren't buying it. One reason was that the talks were held in Milan, Vienna and Luxembourg. "If he wasn't tying to hide anything, why weren't the talks held in Tbilisi or Moscow?" many Georgians asked.

Another reason Georgians doubted Kaladze's categorization of the talks as routine was that they learned of the negotiations not from their own news media but from Russian news reports.

When Georgian journalists asked Kaladze how he could increase their country's vulnerability to Russian economic blackmail, he replied that it was in any country's interests to diversify its energy supply.

Some Georgians laughed at such a ridiculous excuse; others seethed.

That's because Georgians know that making the country more reliant on Gazprom would mean a loss of political independence, since Russia uses oil and gas as geopolitical weapons to bend other countries to its will.

The Georgian public learned the Gazprom lesson all too well a decade ago. In 2005, Gazprom, which was then supplying most of Georgia's gas, demanded a huge price increase for the resource.

Azerbaijan stepped in to supply most of Georgia's need at a much more reasonable price. It has been the main supplier ever since.

When Georgians learned that Kaladze was in talks to restructure the Georgia-Gazprom gas agreement, most accused him of a sell-out.

Kaladze responded by contending that Georgia needed more gas from Gazprom because Azerbaijan would be unable to meet Georgia's growing needs.

That bought a quick denial from Azerbaijan.

Kaladze then backtracked, announcing that Azerbaijan had fixed the "technical problems" that would have prevented it from supplying more gas to Georgia.

The Georgian public also expressed unhappiness about the chief demand that Gazprom was making in the deal-restructuring talks.

Since 2006, Gazprom has supplied most of the gas it delivers to Georgia under a barter arrangement. That arrangement entitles Georgia to 10 percent of the Russian gas flowing through a Georgian pipeline to Armenia, a major Gazprom customer.

Gazprom wanted Tbilisi to drop the barter arrangement and pay for the gas in cash. The danger in such a shift was that the company could quickly raise its prices, as it did in 2005, requiring Georgia to shell out a lot more for gas.

Kaladze resisted this demand in the negotiations, knowing that Georgian consumers would howl about a jump in their gas prices.

But he was open to another Gazprom pitch: that the company was ready to supply Georgia with more of its gas.

The grassroots opposition to Gazprom supplying Georgia with a lot more of its gas led in early March of this year to the agreement that has been in place for years being extended rather than renegotiated.

This means the barter arrangement will remain in place, and Azerbaijan rather than Gazprom will meet any increased Georgian gas needs.

In 2018, Georgia will have access to even more of Azerbaijan's supply. That's when a third pipeline from Azerbaijan to Georgia is completed.

Gazprom was hoping to achieve a larger presence in Georgia before the third pipeline opened.

It failed to reckon on public opposition trumping duplicity, greed and geopolitical ambitions.