Once upon a time, network television news was dignified, objective, and delivered in stentorian, voice-of-God tones by white, vaguely Protestant men, in half-hour increments at the dinner hour. And then, in 1968, third-ranked network ABC, unable to compete with CBS and NBC in gavel-to-gavel coverage of the political conventions delivered by universally respected news teams, decided to try something new. For $10,000 each, they hired extreme right-wing author/journalist William F. Buckley and extreme left-wing novelist/journalist Gore Vidal to discuss and debate each day's events at the conventions which would end up nominating Richard Nixon and Hubert Humphrey. 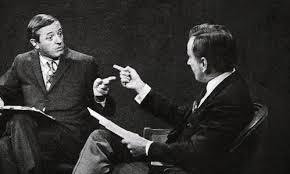 Buckley and Vidal had a great deal in common. They were both combative, rapier-witted, hyper-verbal men from upper-class families, probably the last generation to be able to refer to themselves as "one" unironically. Both ran for office, perhaps more as theater than as real-life politics. When asked what his first act would be if he was elected mayor of New York City, Buckley famously quipped, "Demand a recount."

And both men had in common a deep, visceral, loathing for one another that even exceeded their disdain of each other's politics. Buckley was Catholic and a social as well as political conservative. Vidal was a proud libertine, whose most recent book at the time, Myra Breckenridge, was about a transgender woman, played by Raquel Welch in the movie version.

Their debates were unprecedented in the staid world of television news. So were their ratings. A new documentary about the Buckley-Vidal convention commentary is called "Best of Enemies." The filmmakers, Morgan Neville and Robert Gordon, argue that this was the starting point for the shrill, partisan, programming we now call television news.

In an interview, Neville and Gordon talked about the continuing influence of both Buckley and Vidal. Each was seen as an extremist in the 1960's, but many of their ideas are considered mainstream today. Neville said, "I think that the vicissitudes of time have already made it evident that they are going to take turns. You know Bill certainly reigned in the decade immediately afterward. But now we seem to be in Gore's time. We've gone from Reagan, the apex of Bill's ideas to gay marriage and many of the storming the castle things that Gore advocated for."

"What's interesting about this moment in 1968," Gordon added, "Is it's a moment where Buckley's made a decision to turn towards the mainstream. He spent enough time being the insurgent and he said, 'OK, now I'm going to be a player.' Buckley's National Review endorsed Nixon in '68. And Nixon was not normal choice for the National Review. He was too much of a centrist. Reagan would have been a natural choice, but Buckley made the decision that he wanted to be a real kingmaker in the mainstream of the Republican Party. At that same moment, in 1968 it's kind of the last moment Gore has any illusion that he's going to play any role in national American politics and he's kind of turning his back on the mainstream." They pointed out that Vidal was at the time trying to organize a fourth party convention and later ran for the Senate as an independent. He spent more time in a gadfly role.

The filmmakers agreed that the personal differences between the two men eclipsed their political disagreements. One moment from the broadcast shown in the film is shocking even today as Buckley, furious at being called a "crypto-Nazi," responds by threatening to punch Vidal and using a gay slur that had probably never been previously heard on television. Morgan said,

I think they really thought the other person was dangerous politically. The thing that made the hatred between them, the division between them, so profound was the personal. I think that was the thing that made it not just theater or differences of opinion but made it what it became. They each thought that the other person could detect insecurities that they harbored themselves and that the other was the one person who could expose those to the world. So that person must be destroyed. I mean there is some kind of psychological battle going on at a deep level that deepened the massive political divide they had. Buckley would often associate with liberals outside of television. You'd have this difficult exchange and then he'd want to go and hang out. And Buckley was in New York and kind of had an open salon. His wife had a lot of gay friends who were New York socialites and he hung out with a lot of liberal writers. So I think debates and political differences were seen a little bit as sport for Buckley. But when it came to Vidal it was a completely different game. He was the only person for whom Buckley saw it that way.

There is no one like Vidal or Buckley on television today. There is no place for them to grow to develop," Gordon said. "Television brings on people who will go directly for the sparks and fires without the content. It's become very surface. This fire raged so hot because there was such an intense dislike and discomfort with each other. There's no room for that anymore. Now it's just flash paper fires."

Neville added, "That's the double edged sword. There is a democratization of media that's gone on and that has been really helpful. And certainly the kind of patrician world that Vidal and Buckley represented didn't speak for everybody. The thing that's been lost though with that world going away is we no longer have a public square. We're not meeting in the same place there's no center and we are left in our own echo chambers debating with ourselves or debating with straw men. And what that leads to is not only a kind of a laziness of opinion but more dangerously a subjectification of truth."