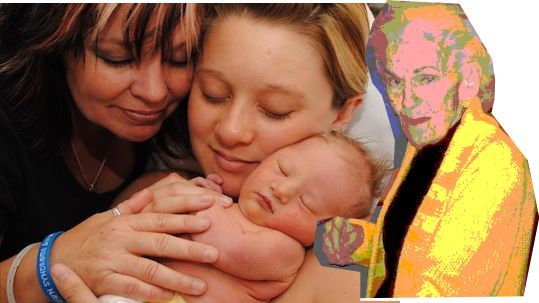 Parenting was much different growing up in the seventies and eighties, than it is today when some consider it child abuse to spank your children. Even though she rarely spanked us, I grew up with a certain respect (and adoration) for my mother who sometimes had to work two jobs (getting paid less than her male co-workers) to support her five children as a single mother.

I wouldn't have dreamed of talking back or arguing with my mom.

She had the looks of a starlet, feminine and graceful; and somehow she could make smoking a cigar and throwing back a shot of whiskey look dainty as she played with her pearl necklace. She was a no nonsense modern renaissance woman of the sixties. She believed in pro-choice and grew up in a time when people with Down syndrome were rarely seen in public. On the rare occasion they were brought up I remember her referring to them as "imbeciles" which would have been considered a normal attitude given that people with Down syndrome were institutionalized up until the late eighties.

Like many other people, I simply looked up to her and spent my life living in her shadow. I lived my life emulating her, making many if the same mistakes and adopting her attitudes. I was the youngest of her five children and was the closest to her so it seemed natural that I take care of her as she became a wise-cracking elderly woman.

Shirley Ann Spiers was my best friend and confidante. Even at 84, still as graceful as ever she was the first person I came to for advice on anything and everything. I talked to her every day.

We had fought for 10 years to keep her alive. Countless days spent in the hospital conquering illnesses, off and on ventilators all the while doctor's terminal predictions became normal and were normally ignored. But the routine got old and I knew that even though she was afraid to die; I knew she was tired, because so was I. I gave up on her.

I will carry my guilt for the rest of my life for giving up on her when she finally died and I would truly understand grief in the years that followed.

But something extraordinary happened just after she took her last breath; a cable still attached from her chest to an overhead monitor raised up in the air by itself and then fell back down as if she had moved it to get out of the bed.

It was shocking. It was Mom. I felt like she was going to stick around, just in a very different way.

Even on the drive home from the hospital that rainy October night, I felt her presence and began talking to her. When situations came up which I needed her advice, I imagined her and what she would say. Was it my way of dealing with intense guilt and grief? I don't know, but it comforted me.

So just two years after her death, I found myself in a situation in which I needed her, perhaps more than ever. Instead of me channeling her, I felt overwhelmed with the feeling that she was channeling me! I knew she would give me advice which in my heart, I found myself not wanting to take; she would have told me to not save and raise the baby with Down syndrome which my partner Andrea had created as a surrogate, when the intended parents requested us to terminate the pregnancy.

Even though I was afraid of people with Down syndrome and as the intended Moms, our friends and family gathered firmly behind terminating this little life; of a little girl who we nicknamed Peanut, who was created with so much love and intention. I found myself not being able to shake the feeling of how unfair this was to her.

Knowing how I felt about people with Down syndrome, Andrea told me she would do what I wanted her to do. I knew I couldn't make the decision lightly, as I had realized that I loved this little fighter. I was already grieving my mom's death and dealing with my guilt for giving up on her. Could I give up again?

As I hesitated, I could almost literally hear Mom's voice as if she were in the very room with me, as opposed to just in my head, "Keston you can't do this. Are you out of your mind?" She would have needed me to hear her.

Pacing and staring down at the ultrasound picture of what looked like a perfect baby, I was surprised to find myself crying and talking out loud to Mom, "I am sorry I gave up on you, Ma. But I am not giving up on Peanut." And I didn't.

In those moments I finally emerged from Mom's shadow.

Andrea and I decided to save and raise the baby girl we would name Delaney Skye and have never once regretted the decision. We realize what we believe Delaney has always known; she has always been our daughter.

Funny thing, I still feel Mom around watching over me, but now she is also watching over Delaney. Mom would have quickly rallied behind Delaney. She always supported an underdog and this little underdog is her grandchild, probably her favorite.