"Welcome back, my friends to the show that never ends..." Who knew that masterful track from prog-rockers Emerson, Lake and Palmer would prove so prescient in tone and spirit? But I think it helps define how the discordant tone of the art world and its laser-focused attachment to economics has eclipsed critical analysis of work in lieu of potential star power in global auction rooms. To step away from the grotty, finance-driven side of ArtWorld Funhouse, (as I'm calling it now), I think the idea of Happenings play an even stronger role in the ongoing miasma of art world plutocracies that renders it bland. Happenings offers little financial reward but pays enormous dividends in cultural commissions. Consistent in its momentum, promiscuous in style, the group compels you to participate. 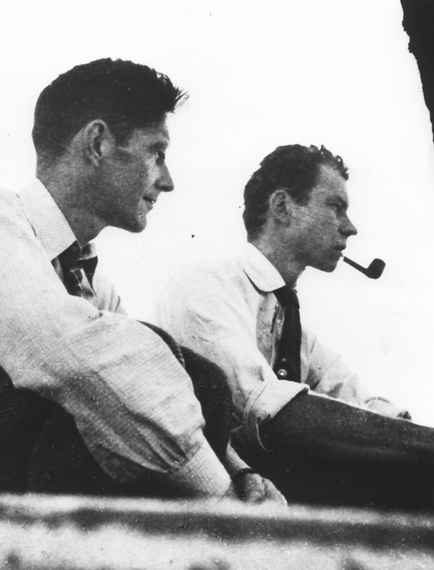 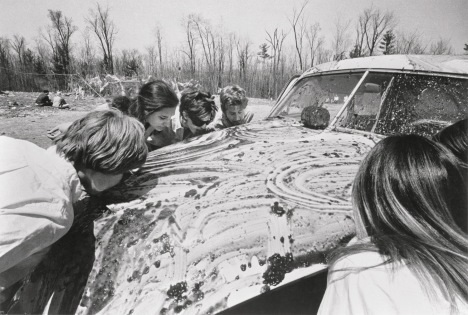 Women licking jam off a car,' from his Happening 'household' (1964)
Courtesy Getty Research Institute © Estate of Sol Goldberg and tate.org.uk

Reaching back further, the concept's origins look to Al Hansen, a founder of the Fluxus art movement. While stationed in Germany after WWII, Hansen dropped a piano from a burned-out building in what is considered the first-ever Happening (later recreated for friend and collaborator Yoko Ono). In 1958, he attended an influential class with Cage at the New School for Social Research. Of his Happenings, Hansen once explained, "I only prepare the skeleton and then invite people to put meat on it and see what the animal looks like in the end." 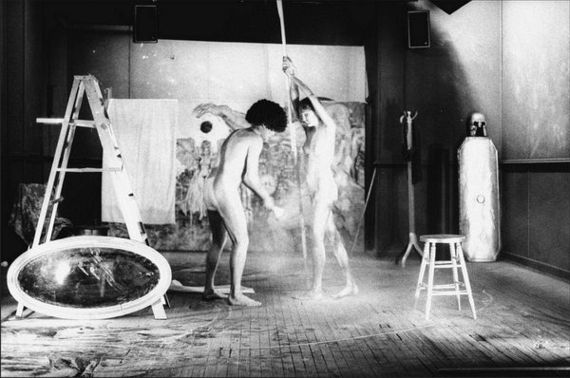 Jumping ahead several decades, the traditions of Happenings continued in Kansas City. One recent event is a one-night event for the latest release of Bohemian Magazine, a quarterly publication based in Kansas City and published by artist and provocateur Carrie Riehl. The Bohemian focuses on local visual, literary and performing arts, and pays attention to our culture and perspectives. Geared towards promoting early as well as later career artists, it creates a forum primed for having a good time. And on the night of their Spectrum Issue release party in early February, Riehl and Company wanted to mirror their happening around the spectrums of sex, sexuality, gender, race and class so they created a nurturing environment, a teenage bedroom. Following in the footsteps of other Fluxus artists like Carole Schneemann and Yoko Ono, the group divorced their audience from any sexual implications to create a teenager's bedroom. The close bonds such innocence engenders was carried over to this evening; laughing, giggling and speaking a few intimate truths. These bonds are often lost once one enters adulthood approaches a different dynamic were reignited here.

Within the bedroom, a make-up station with a closet of clothes was arranged; a full bed with netting overhead, plush rugs and comfortable chairs. The environment was not exclusive or uncomfortable for any demographic, everyone understood and were encouraged to "let their hair down." People of all ages, demographics and sexualities were getting their nails painted, trying on clothes and taking pictures on the bed with assistants dressed in nighties and onesies. 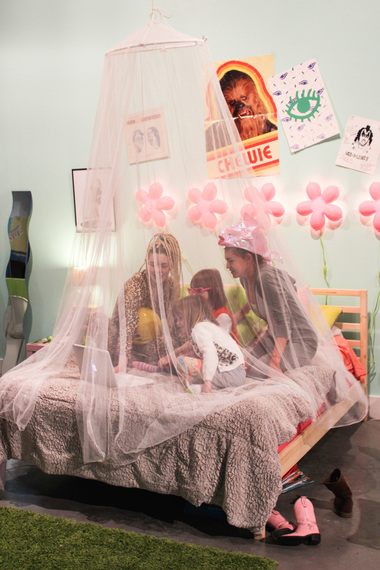 The passive observer becomes the assertive driver of this train and its success or failure, is predicated upon participation. The takeaway being the experience one has within their surroundings. And because many depictions of the hippie movement were often wrongly described as Happenings, the term got a bad rap, to swipe a phrase from back in the day.

Mores and social conventions haven't changed all that much from the 1960's. The problems then aren't much different from the problems today; inequality, racism, sexism and religious zealotry have different players, but the stage remains the same. And the ideas of Happenings allow for participants to deconstruct, or reconstruct, ideas and moods that allow truths to become unleashed.

Kansas City has a history of Happenings. Sound Light Silence: Art that Performs ran November 4 through December 4, 1966 at the William Rockhill Nelson Gallery of Art and Mary Atkins Museum of Fine Arts (now known as the Nelson-Atkins Museum of Art). It included a Happening directed by Hansen. Max: Engineered Theater: Kansas City '66 was performed on November 18, 1966 at the museum's Kirkwood Hall and exceeded standing room crowds. 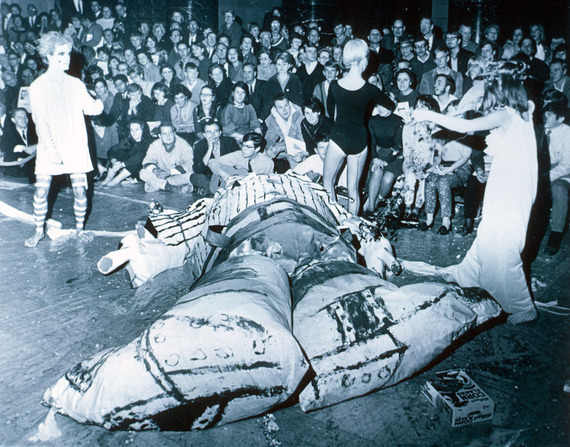 Al Hansen-directed Happening in Kansas City, 1966
courtesy of The Nelson-Atkins Museum of Art

Which brings us to the work of another Kansas City artist, David Ford. His Maximon shrine is an ongoing 15-year-plus performance. Ford remarked in a previous interview with the author in Whitehot magazine, "This immersive performance installation confronts the issue of the backward days in the Mayan calendar and finds a place for these dark activities. The passion play draws hundreds yearly and provides an opportunity for the public to interact with the living sculpture." This interaction is a commonality for all who participate that strengthens its energy cycle. 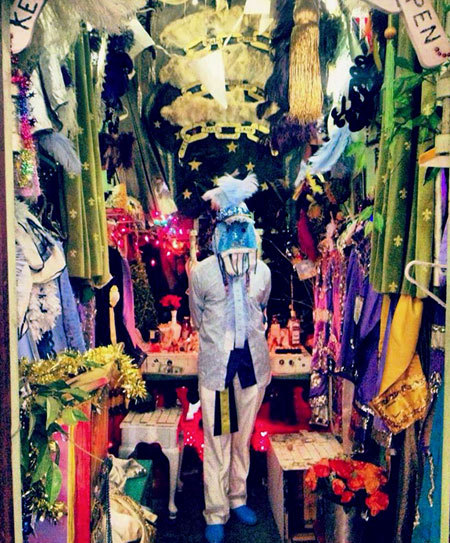 It's basic biology, humans need contact. They also desire conversation and documentation of their existence, too. The collective of art and observer dissolves into a boundary-free zone where answers aren't necessary because there aren't any questions. Feelings of community and belonging in an environment where frames are eliminated cushion the pain of re-entry. Chatting again with Melaney Mitchell, Director of Subterranean Gallery, who has been my go-to resource for translating ideas of visual and virtual art-making, brings up the point of how ideas of happenings needn't only occur in a carbon-based state. As Mitchell says, "With the rise of the web, its caused the true proliferation of artistic mediums. (It) is no longer fitting into a square box of a studio its organic, multi-disciplinary, nonlinear. it doesn't follow a boxed structure and if it does it still needs to -- in some ways -- branch out in order to interface with the world (painters need to do graphic and web design to exist online)."

Mitchell continues, "In terms of live events I think reaching deeply into the ideas of MMORPGs (Massively multiplayer online role-playing games) is important because a dungeon on W.O.W. (World of Warcraft) could be considered a Happening. Each avatar is performed by an audience member of warcraft itself and it goes through and follows a story line as a performer would in a play. Players change the perception of what you're doing in the same way a social space of an exhibition opening can have a direct impact on how you perceive that work." 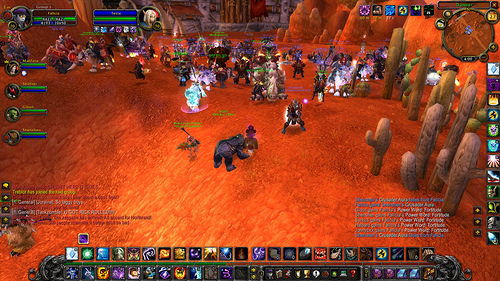 Here we are presented with a new way of thinking and bringing the idea of a Happening into the virtual realm. Does it result in an unfulfilled promise? Author Louis Bromfield wrote in The Work of Robert Nathan (1930), "Truth may be found in the heart of a philosopher but seldom in the figures of a statistician; it is far too delicate a thing to be pinned sown to columns of numbers on ruled paper." But I believe the virtual world, with its technological exactitude, migrates seamlessly accounting for real world considerations.

To reach an edge then fall over, that is when one enters into the true realm of imagination. But how can one feel imaginative if they are poked and prodded with euphemisms meant to be intelligent? The mechanics take over and organic immersion is seized by too much thought which leaves one in a state of pretentious paralysis.

It is difficult, impossible, to put a price on an experience, which is what makes all of these encounters so enriching. Imagine possessing a Monet and being chained to its beauty only because there is a dollar amount attached that detracts from the essence of why such beauty is created in the first place.

Once we depart a Happening, these encounters linger. Becoming an indentation, a mark, a line, we have made a difference in our lives and those of the people we encounter. Happenings are not about concerning ourselves with what is on the other side of a door, to open that door is enough.